Appearing on her own blog as well as on the websites of industry front groups Organic Consumers Association and EcoWatch, Pat Thomas recently spun some persistent lies about bio-engineered soy. The blog entry was an attempt to refute Impossible Foods’ defense of their plant based burger and one of its ingredients. Their product has come under attack recently by the vocal anti-vaccine group Moms Across America.

“Moms Across America” has escalated a year-long campaign against Impossible Foods to push its anti-vaccine, anti-GMO agenda to anyone gullible enough to listen. The group’s latest salvo is a pathetic “news release” full of lies, anti-science rhetoric and ignorance of basic arithmetic.

A common propaganda line used by anti-biotechnology activists is that “no one should make or use GMOs because comsumers don’t want them”. The Impossible Burger is proving them wrong, having become quite popular in restaurants ranging from Burger King to fancier restaurants in New York City. It has become so popular in San Francisco that it is becoming hard to find due to selling out.

The plant based burger even mimics beef by “bleeding” due to a genetically modified soy used in its production process. According to Food Dive:

The soy leghemoglobin is a protein that carries heme, which is an iron-containing molecule that occurs naturally in every animal and plant. For the Impossible Burger, however, it is created in a lab. Heme, which makes the Impossible Burger “bleed” and appear pink in the middle, is the “magic ingredient” that enables the product to satisfy meat lovers’ cravings, according to Impossible Foods.

Pat Thomas, author of some children’s books and several fake medicine books for adults, decided to join the anti-vaccine group in their misinformation campaign by spreading these lies:

Thomas uses a study by industry mouthpiece and Maharishi cult leader John Fagan to insinuate that bio-engineered soy is somehow less safe than organic and other conventional soybeans.

Amelia Jordan writes about the problems with the study Thomas relies on:

This paper does not meet minimal scientific standards in design, writing, or proper citations. To begin, a customary introduction should be full of credible references in order to set the stage for the study, however, there are no citations until the fifth paragraph. By that time, we have seen at least 12 statements that the authors do not give any citations for; most are statistics on GM-soy and glyphosate. The authors do not state the sources of this information, thus we cannot know if what they are claiming is supported by evidence…..

The number of samples collected poses the largest problem with this experiment. The authors should have used n=30 for each group (GM soy, conventional soy, organic soy, and the missing greenhouse control group) in order to obtain meaningful statistical results. Instead, the number of samples collected were 1/4th the number that should have been collected. To add to this severe lapse in experimental design, there aren’t enough matching soy varietals between groups to conduct any meaningful statistical analysis. An n=4 is far too small a sample size to run any comparison with. There is one organic sample that can be compared with three conventional samples of the same variety of soybean. There is no way that the authors could derive any worthwhile statistical meaning from the samples they collected. There are just too few samples.

2. “Higher use of pesticides”

Relying on industry front groups like Food and Water Watch, as well as disgraced professor Charles Benbrook, Thomas insists that GMOs are bad for the environment. Yet according to an independent report put out by Chesapeake Stormwater Network:

The changes includes a major shift towards conservation tillage and
genetically modified crops and greater use of glyphosate to control weeds.

Glyphosate and its degradate, AMPA, are mobile in the environment and are
frequently detected in surface waters, but are not as persistent in soil or water as the herbicides they replaced.

Testing has shown that glyphosate and AMPA are much less toxic to bird, fish
and aquatic life, do not bioaccumulate in tissues, and have minimal impacts of
human health.

Overall pesticide use in the United States has actually decreased since it peaked in the 1980s. Has it been a dramatic reduction as many pesticide promoters claim? Absolutely not. But it also hasn’t “skyrocketed” as the primitive farming movement claims. 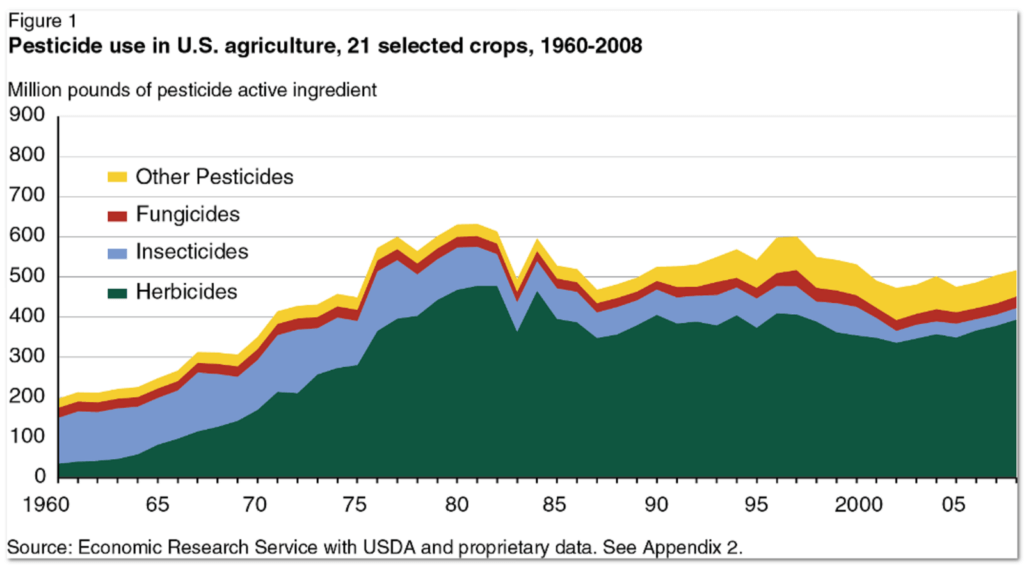 3. “No benefits for farmers”

This is not just a lie, but an insult to the countless hardworking farmers that work to grow our food around the world. Farmers are business people, and if bio-engineered seeds did not provide a benefit they just wouldn’t use them. The benefit is even greater in developing nations:

On average, GM technology adoption has reduced chemical pesticide use by 37%, increased crop yields by 22%, and increased farmer profits by 68%. Yield gains and pesticide reductions are larger for insect-resistant crops than for herbicide-tolerant crops. Yield and profit gains are higher in developing countries than in developed countries.

Any look at the data shows this to be just another organic industry propaganda claim. Agricultural land use has been on the decline since 1949, allowing for more land to be set aside for preservation of biodiversity. The growing suburbs are far more of a problem for biodiversity than high yielding conventional farms.

Industry talking points, like what Thomas often uses, are used to misdirect the public. Studies certainly show that biodiversity on organic farms is greater than on conventional farms. Some organic farmers don’t even bother doing weed control at all, causing a different type of environmental problem.

Farming is inherently harmful to the land being used. But by increasing yield, less of that land has to be used.

5. “No scientific consensus around safety”

Like anti-vaxxers, the tobacco industry, and climate change deniers, anti-GMO extremists love to cherry pick scientific studies while putting forth their own quacks and cranks as evidence of a lack of consensus. Often they will also mislead by claiming that “there is no consensus that all GMOs are safe”.

Technically that is true. No scientific organization states that. The consensus activists like Thomas choose to ignore is that there is no evidence that GMOs currently on the market are any riskier than their conventional counterpart. It may not sound like much of a distinction, but it is one that allows Thomas and her ilk to construct a straw man argument around.

Certainly some companies were hesitant to label products, especially given how much the misinformation campaign has been active over the past few decades. This concern appears to even be overblown as one study has shown that such labels actually decrease consumer concern.

Controversy often creates concern, rather than evidence itself. Before labeling laws went into effect, anti-GMO extremist groups were able to use it as a primary talking point. “If GMOs are so safe, why not label them?” Now that they are, that talking point almost became prophetic. They are safe, and most consumers now recognize it. Thomas’ claim is also without merit because Impossible Foods will in fact sell their meatless burger in grocery stores where labeling is mandatory.

It’s time to demand more honesty from the primitive food movement, continued evidence based decision making from our regulators and a higher level of truthfulness and transparency from the organic food industry.

This article originally ran at Medium as 6 lies told by Pat Thomas about GM soy and has been republished here with permission.