This article or excerpt is included in the GLP’s daily curated selection of ideologically diverse news, opinion and analysis of biotechnology innovation.
To feed a global population that has expanded from 3.7 billion in 1970 to about 7.7 billion today, agriculture has had to up its game. During this same time, agriculture (both plants and livestock) production has more than doubled.

This means that more land has been transformed for agricultural production, which has garnered concern from ag officials, environmentalists and scientists alike. They all have voiced concerns about reduction in biodiversity, and the elimination of habitat for wild species of animals and plants.

Pro-organic (often anti-GMO, and anti-“corporate farming”) advocates point to the overall environmental benefits from growing organic (or at least smaller scale) crops. Many of those arguments follow the US Department of Agriculture’s National Organic Standards Board’s official definition of what is organic:

Organic agriculture is an ecological production management system that promotes and enhances biodiversity, biological cycles, and soil biological activity. It is based on minimal use of off-farm inputs and on management practices that restore, maintain, or enhance ecological harmony. The primary goal of organic agriculture is to optimize the health and productivity of interdependent communities of soil life, plants, animals and people.

But there’s another concern about the earthly impacts of agriculture: the composition of the atmosphere, and climate change. Most agricultural practices — tilling soil, using fossil fuel-driven equipment to apply fertilizers and pesticides, and the chemicals used themselves — all contribute to the release of greenhouse gases such as methane, carbon dioxide and certain organic chemicals (using that term in its technical, chemical sense) which have been connected to changes in the planet’s climate. 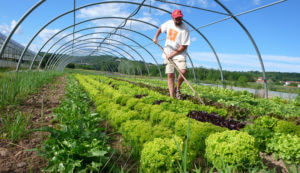 So, fewer inputs and less land would mean less greenhouse gas released, right? Correct. However, a number of environmental advocates, including the $67 billion organic/natural food industry, have advocated a shift from conventional farming to organic growing, which they argue aids in preserving biodiversity and soils.

Biodiversity and soil health may be helped by some organic practices. However, the yield gap between organic and conventional growing remains persistent, and largely in favor of conventional farming. The USDA and other organizations have been researching ways to boost organic farming yields, including the use of conservation tillage. And there are a few crops like hay, rye and alfalfa, where organic systems show a similar or even larger yield than conventional approaches, according to research by agricultural consultant Steve Savage. But the overall gap remains stacked against organic. So far, it just takes less land to grow conventionally and intensively.

Which is better to help address the greenhouse gas crisis: Organic v conventional?

Less land means fewer greenhouse gases, and intensive farming can squeeze more turnips and other foods out of the ground. A well-regarded study out of the Netherlands of energy use and greenhouse gas emissions in organic vs. conventional farming systems is widely considered to have definitively answered that hot-potato question. As the authors noted, “Dutch agriculture is characterized by relatively intensive land use in both organic and conventional farming,” which made it a good place to test out various theories.

Its conclusions should put a brake on those urging, at the same time, reducing greenhouse gases while increasing the use of organic farming techniques. The study found energy use and greenhouse gas emissions per unit milk in dairy farming, a relatively small part of the farming economy, is 5-10% lower than in conventional dairy. As for the majority of the farm economy:

“The most likely cause for higher energy use and GHG emissions in Dutch organic crop production,” the Dutch scientists found, “is its high intensity level, which is expressed in crop rotations with a large share of high-value crops, relatively high fertiliser inputs and frequent field operations related to weeding.” Its recommendations?

A more recent study, in 2016, aggregating global data over 40 years, came to a similar conclusion. Researchers at the Universities of Copenhagen, Aberdeen and Greenwich (UK) analyzed agricultural production and greenhouse gases from several regions around the world, including Central Asia, South America, Eastern Europe, the Middle East, Sub-Saharan Africa and North America. The researchers took a unique methodological tack in their study. Instead of doing what most climate change/agricultural output researchers do, they measured emissions in each geographic area by looking at emissions per unit of product. This created data on the actual intensity of greenhouse gas emissions for each agricultural product. This way, for example, they could tell that rice production in Asia and elsewhere contributed mightily to greenhouse gases, because of methane produced.

How do GMOs play into the debate?

The study also revealed that the most industrialized countries, which used more technologically advanced inputs including but not limited to genetic modification, emitted the least amount of greenhouse gas per product produced. It also revealed that these technological advances have helped agriculture “uncouple” from greenhouse gas production. Overall, global greenhouse gas emission per unit of crop produced has decreased 39 percent for crops between 1970 and 2007, and decreased 44 percent for livestock during the same period.

But this “uncoupling,” or decrease in greenhouse gases, has not been seen in developing countries, which are so far the source of that doubling in agricultural production. Regional differences, they saw, were dramatic. Emissions per unit crop dropped by 94 percent in Oceania, by 27 percent in sub-Saharan Africa, by 56 percent in Europe, and an increase in GHGs per unit of 4 percent in North America. Now, that sounds like a contradiction.

Why would North America go up and Africa go down, and still be called a decoupling from intensive agriculture? Because the land under agricultural use has actually been reduced in industrialized, intensive areas like North America, Europe and Oceania. The latter three areas have reduced agricultural regions by 10 percent (118 million hectares), while developing countries have increased their farming regions by 13 percent (447 million hectares). So proportionally, intensive agriculture emits less gas. North America ends up being the most climate efficient crop and (one of the most) efficient livestock producer, because while 14 percent of agricultural production came from North America in 2007, only 4 percent of greenhouse gas emissions did. And while production has increased steadily, total emissions have been relatively static (there’s that 4 percent number), with a total effect of reducing emissions.

Land use change (switching from wild lands to agriculture) and agriculture are responsible for a quarter of all greenhouse gas emissions from human acts. And 90 percent of emissions from those land use changes emanate from agriculture. That means that ag is the focal point for that 25 percent of greenhouse gas on earth. But agriculture’s getting more efficient, thanks to a range of technologies that keep greenhouse gases in the ground and reduce the need for land changes—and a growing area is genetic modifications, whether they be transgenic, cisgenic, gene editing, or more efficient breeding methods.

A version of this article previously ran on the GLP on September 19, 2017.