In June, GMO Answers had a booth at Nutrition 2019, the annual scientific meeting of the American Society for Nutrition. We had a lot of great conversations with registered dietitians, academics, food scientists, and others interested in food and nutrition.

But at this meeting, someone came up and asked us a very interesting question: “What do you wish people knew about GMOs that would completely surprise them? What should they know, but don’t?” What an amazing and thoughtful question! I gave some thought to this and have put together a list of four things about GMOs that people would be surprised to learn, going beyond the standard FAQ and talking points.

I tried to think about the time before I learned a lot about GMOs when putting together this list. I grew up on a farm. I still have close ties to agriculture. I worked for 15 years in the scientific research field. I thought I knew a lot about GMOs. I didn’t. And here are the things that even I still find surprising about GMOs: 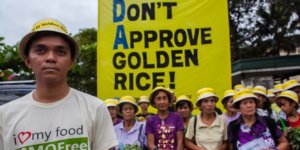 Most people have probably heard of Golden Rice. Click here to learn a bit more about the technology behind this biofortified crop. Golden rice was first developed back in at the turn of the millennium and made a huge splash in the news. But here it is, in 2019, and it’s still not reaching the people it needs to reach most. Why not? A variety of factors, not the least of which is opposition to the crop by activist groups. But the main point is that it’s a GMO that most people think is already available, but it’s not.

No GMO wheat. No GMO Tomatoes.

Of all the crops that I assumed were GMO, I thought corn and wheat were the two big ones. Nope. There is no GMO wheat on the market anywhere in the world today. Some people assume that because it’s a large commodity crop grown in the Midwest, that it must be a GMO. Recent attention on gluten probably also causes confusion in people’s minds, but the two issues are unrelated.  There are no GMO tomatoes on the market anywhere in the world today either. There was one back in the 90s (the Flavr Savr tomato), but it didn’t sell very well, so was taken off the market.

Again, contrary to what many people think, seedless fruits are not GMOs. They are not the product of genetic modification. Well, pretty much all our food has been genetically modified, but seedless watermelons and seedless grapes are not modified in the way that has become the common definition of a GMO. Seedless watermelons are bred in a way that results in a (mostly) seedless product. Seedless grapes are basically clones of a very old variety of grapes that have existed for thousands of years. It’s only recently that consumers now prefer, and expect, the seedless grape on our kitchen tables.

Contrary to popular belief, GMOs aren’t actually banned all over Europe. Not only are they grown in a few countries (and quite successfully, as this report shows), but farmers are actually suing for the right to grow them in other countries Europe imports vast quantities of GMO crops, such as soy, for animal feed. And concern about GMOs has dropped about 50% in recent years, as this new report from the European Food Safety Authority shows.

These are just a few examples of some commonly held misconceptions about GMOs. Why is it so important to separate fact from myth about GMOs? Because if you’re misinformed about one thing, you might be incorrect about some other facts, too! To learn more about GMOs, visit the GMO Answers website and explore it for yourself! If you have a question about GMOs that you can’t find the answer to, submit the question to the site, and one of our volunteer experts will answer it for you.

Michael Stebbins is the Manager of Communications and Programs at the Council for Biotechnology Information. Follow CBI on Twitter at @agbiotech

This article originally ran at LinkedIn as 4 Things You Probably Don’t Know About GMOs, But Definitely Should and has been republished here with permission.