This article or excerpt is included in the GLP’s daily curated selection of ideologically diverse news, opinion and analysis of biotechnology innovation.
In 2017, University of Florida plant geneticists Zhonglin Mou and Kevin Folta, along with their team of graduate students, announced a new method to fight common diseases in fruit plants. Their discovery could drastically reduce the use of fungicides if widely implemented by growers.

Unfortunately, their methods may never be put to use thanks to the controversy surrounding crop biotechnology.

The research confirms a point that cannot be stressed enough: scientists continue to make agriculture safer and more sustainable with the tools of modern genetics, but activists have waged such an effective scare campaign against crop biotechnology that it often remains unused by industry.

For the study, the team utilized a common technique called Agrobacterium-Mediated Plant Transformation to test how two plant genes might affect disease progression in the Woodland Strawberry. These genes, AtELP3 and AtELP4, confer enhanced resistance to several plant diseases like anthracnose crown rot, powdery mildew, and angular leaf spot. The researchers demonstrated that the genes affect disease processes in the model organism Arabidopsis thaliana, and the effects translate to the valuable strawberry crop.

By over-expressing the two genes in strawberries, the scientists discovered that the fruit plants possessed enhanced resistance to common crop diseases, just like Arabidopsis thaliana. This discovery, they write, “may hold the potential to mitigate disease symptoms and reduce the use of fungicides in strawberry production.”
But the technique has much broader application. “If it works here, it works anywhere,” Folta said. “Kind of like if the FRAM oil filter fits on your BMW, it probably will work on your Chevy.”

Now, here’s where the story gets more interesting. A Twitter user asked Folta if he was trying to make heads explode by showing that genetic modification could reduce pesticide use on food crops. Folta replied, “No chance. Such technologies would never be even considered. Costs too much to deregulate. We just show that it COULD work if we actually wanted to do good things.”

A little surprised, I asked Folta to confirm that this technique would never be commercialized by fruit growers. His answer: “Small fruit industries are not interested. Costs a lot, tech always changes, takes time, consumer backlash fears. Fungicides are safe and cheap.”

So, thanks to the new research, fruit farmers have a powerful tool at their disposal, but it doesn’t make economic sense to implement it. For now, the research only informs slower traditional breeding efforts that might produce crops more resistant to disease.

Activist interference is the primary reason this novel approach to disease resistance would be too expensive and time-consuming to deregulate. Environmental activists are adept at whipping up public concern about technologies they don’t like. The result is that consumers buy less (or none) of the product in question. We saw this during the alar scare in 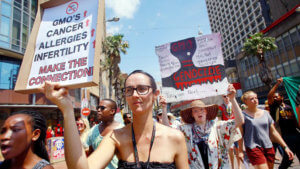 the 1980s, when the Natural Resources Defense Council convinced Americans that apples safely treated with the chemical were toxic.

In this case, anti-biotech activists complain that modern agriculture has increased pesticide use. Greenpeace, for instance, complains that “the surge in genetically engineered crops … is one [sic] of the main drivers of increased pesticide use and chemicals in agriculture.” The truth is the exact opposite, as Folta’s study illustrates. The sad irony, then, is that the activists at Greenpeace and other misinformed nonprofits cause the problem they complain about.

Fruit farmers today don’t want to deal with the prospect of consumers refusing to buy their products because of activist propaganda. “I think the problem is that any GE crops could cause a backlash in consumers,” Folta told me by email. “Right now producers like Florida and other seasonal producers have a good market share. Why jeopardize that?”

Moreover, waging PR campaigns to counter anti-biotech junk science is expensive and often counterproductive. Evidence-based attempts to combat misinformation can work, but they’re long-term efforts and easily rendered ineffective. As science writer Michael Shermer pointed out in a 2017 Scientific American story, people convinced by activist fear-mongering often reject contrary evidence. They perceive the conflicting information as a threat to their beliefs and disregard it as industry lies:

In a series of experiments by Dartmouth College professor Brendan Nyhan and University of Exeter professor Jason Reifler, the researchers identify a related factor they call the backfire effect “in which corrections actually increase misperceptions among the group in question.” Why? “Because it threatens their worldview or self-concept.”

The other related problem is that activists will use federal regulations against biotech crop developers. As of now, U.S. regulators maintain pretty sensible policies toward food ingredients produced from GE plants. It’s relatively easy to bring genetically engineered crops to market in America, and activists use that fact to scare the public about “untested GMOs.” The Organic Consumers Association (OCA) has done this every time a new crop variety is made available, though OCA has been wrong about the supposed dangers every time.

This trend has continued with the introduction of crops and pesticides developed through new breeding techniques (NBTs), such as CRISPR and RNA interference, which can edit and silence genes to produce desired effects. Plant scientists, for instance, can now protect apples from diseases that are difficult to treat with chemicals and control many different pests without adding even trace amounts of pesticide to the environment, as the EPA has pointed out. But the anti-GMO movement is steadfastly opposed to NBTs, apparently unaware of or uninterested in these important facts.

The problem is not that crop biotechnology is dangerous, untested or even impractical. As the research has repeatedly shown, none of these fears are justified. Genetic engineering will continue to enable new innovations in agriculture. And if activists would stop campaigning and start listening to the experts, they’d realize these developments are good for us and good for the planet.

This article was originally published at Real Clear Science as “How Anti-GMO Activists Get in the Way of Cutting Pesticide Use” and has been republished here with permission.