Evolution, the human diet and the meat vs. plant conundrum

This article or excerpt is included in the GLP’s daily curated selection of ideologically diverse news, opinion and analysis of biotechnology innovation.
Meatless Mondays encourage US omnivores to take a weekly break from meat. The movement’s mission is to reduce consumption of meat for health and environmental reasons. Some say it’s a small way to help climate change through the reduction of greenhouse gas emissions. Ironically, climate change is likely what caused our hominin ancestors to start eating meat in the first place, about 2.5 million years ago.

As the planet heated and rains slowed, the lush fruits and vegetation that largely fed our ancestors became harder and harder to find. Forests were diminished and became grassy plains where animals fed. Hominins had to find new food sources. Some chose to pursue meat, and others stuck with fruits and veggies, possibly to their detriment explains Marta Zaraska at the Atlantic:

During the long, dry spell from January through April, our ancestors would have had problems getting enough food, and to find their usual fare, they would have had to expend more time and calories. Early hominins were at an evolutionary crossroads. Some, like the australopiths, chose to eat large quantities of lower-quality plants; others, like early Homo, went for meat. The australopiths ended up extinct, but early Homo survived to evolve into modern humans.

Hominins likely started by scavenging the kills of larger carnivores and cutting remaining meat from the bones. Archeologists have found bones of large mammals with knife cuts from stone-tools. These bones date from about 2.5 million years ago. Humans only began cooking as we know it about 800,000 years ago. So for nearly two million years we consumed raw meat, according to paleoanthropologist Briana Pobiner.

Eating meat requires digestive enzymes—and the genes that encode for them—that weren’t immediately inherent in our ancestors. They also needed different anatomy, particularly our guts to make it happen. At first, our ancestors probably only consumed small amounts of meat, what was leftover as too difficult to get by large predators. This transition may have been helped out by an earlier move by early humans to a diet heavy in fat-rich nuts and seeds. That may have jump started the ability to digest fats with this switch. Seeds may have been important for stone tool development, too. Early grinding and hammering tools, to release seeds from their shells, may have led to the development of knives, from the Atlantic:

It seems that our bodies had to adjust gradually, first getting hooked on seeds and nuts, which are rich in fats but poor in fiber. If our ancestors ate a lot of them, such a diet would have encouraged the growth of the small intestine (where the digestion of lipids takes place) and the shrinking of the caecum (where fibers are digested). This would have made our guts better for processing meat. A seed-and-nut diet could have prepared our ancestors for a carnivorous lifestyle in another way, too: It could have given them the tools for carving carcasses. Some researchers suggest that the simple stone tools used for pounding seeds and nuts could have easily been reassigned to cracking animal bones and cutting off chunks of flesh.

As a species we are relatively immune to the harmful effects of fat and cholesterol. Compared to the great apes, we can handle a diet that’s high in fat and cholesterol, and the great apes cannot. Even though we have all these problems in terms of heart disease as we get older, if you give a gorilla a diet that a meat-loving man might eat in Western society, that gorilla will die when it’s in its twenties; a normal life span might be 50. They just can’t handle that kind of diet. 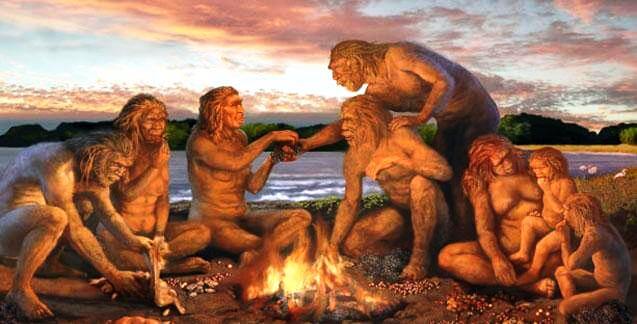 Human gene variants promoting veggie-rich and meat-rich diets are still distributed among modern humans. They fall into patterns one might expect given modern cultural dietary traditions. A gene variant that promotes conversion from dietary food sources to omega 3 and 6 fats necessary for brain development is found more often in India, where many people are vegetarian. A different variant that slows this conversion is found among arctic people who eat a fish-heavy diet already very rich in these fats, according to a recent Cornell study. From the Washington Post:

[The vegetarian allele] doesn’t exist in our ape relatives the chimpanzee or orangutan, but there is some evidence it may have been there in early hominids Neanderthal and Denisovan. It seems likely, the researchers wrote, that it has to do with migration patterns and the pressures that came with the availability or lack of availability of different kinds of foods in certain environments.

Some paleoanthroplogists have suggested that eating meat and learning to cook it was the driving force for homonin’s large brain expansion. Another camp has identified meat as the foundation of the once popular ’paleolitihic diet.’ But others think the meat-centeredness might be incorrect. Yes, we need meat, but we’ve also evolved the ability to digest tubers. That might be just as important, paleobiologist Amanda Henry told Ann Gibbons in National Geographic:

“There’s been a consistent story about hunting defining us and that meat made us human, says Henry, a paleobiologist at the Max Planck Institute for Evolutionary Anthropology in Leipzig. “Frankly, I think that misses half of the story. They want meat, sure. But what they actually live on is plant foods.” What’s more, she found starch granules from plants on fossil teeth and stone tools, which suggests humans may have been eating grains, as well as tubers, for at least 100,000 years—long enough to have evolved the ability to tolerate them.

This article previously ran in a slightly altered form in May, 2018.

Meredith Knight is a freelance science and health writer based in Austin, Texas. Follow her on Twitter @meremereknight