This article or excerpt is included in the GLP’s daily curated selection of ideologically diverse news, opinion and analysis of biotechnology innovation.
Legendary musicians Willie Nelson, Neil Young and John Mellencamp organized the first annual Farm Aid concert in 1985 “to raise awareness about the loss of family farms and to raise funds to keep farm families on the land.”  In recent years, however, Farm Aid’s laudable effort to support US agriculture has apparently morphed into a promotional event for organic food, which is sponsored largely by big industry names including Chipotle, Whole Foods and Horizon Organic.

Even though most US farmers grow genetically engineered crops, for example, Farm Aid advocates the development of  “alternative supply chains that help farmers meet growing demand for non-GMO products and avoids [sic] GMOs in our sourcing.” The group also hopes to “build demand for non-GMO food.” These goals are fueled by the Farm Aid’s belief that crop biotechnology is key to corporate control over agriculture:

Twenty years ago, the first GMO seeds hit the market. In the decades that followed – as more GMO varieties were adopted and the seed sector rapidly consolidated – ethical, political, legal, environmental, economic and social concerns for the technology have emerged. While many farmers say they are pleased with GMO varieties, many others are disappointed, finding mixed results or facing new problems in the extremely concentrated and corporate-dominated seed sector. 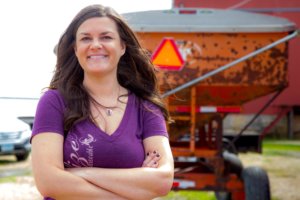 Farmer and science writer Michelle Miller, known to her fans as “The Farm Babe,” attended the 2019 Farm Aid concert in Wisconsin. On this episode of Talking Biotech, Miller recounts her experience to host and plant geneticist Kevin Folta. Besides attendees sporting shirts that read “f*** Monsanto,” Miller says she witnessed an event staffed by well-meaning people concerned about family farmers, who ultimately did more to spread misinformation about modern agriculture than anything else.

I attended with hopes to have a chat with the Farm Aid higher ups or the artists to explain that the kinds of operations perceived as “corporate” or “factory” farms are still run by family farmers. And they oftentimes have the same struggles as the little guy. Unfortunately I didn’t get that chance to talk to them ….