Global consensus finds neonicotinoids not driving honeybee health problems. Why is Europe determined to ban them?

This article or excerpt is included in the GLP’s daily curated selection of ideologically diverse news, opinion and analysis of biotechnology innovation.
One of the more intriguing subplots in the melodramatic debate over neonicotinoids and the ‘future of bees’ is the apparent divergence of viewpoints by risk and regulatory agencies on the potential threat to pollinators posed by the insecticide.

There is no question that the health of bees is an issue––mostly, entomologists say, because of bee keeping practices, Varroa destructor mites (which vector roughly a dozen different diseases into beehives) and the widely prevalent gut fungus Nosema ceranae. But according to the Environmental Protection Agency, the US Department of Agriculture in a March 2018 report and recent studies from agencies in Canada and Australia, where neonicotinoids are also widely used, seed treatments, which is how the insecticide is most commonly applied, are not a major health threat to honeybees.

Unlike chemicals that are sprayed on plant surfaces and remain on the plant, neonicotinoids are usually applied as a seed coating and are taken up throughout the plant—in the roots, stems, leaves, flowers, pollen and nectar.

“I am not convinced that neonics are a major driver of colony loss,” said University of Maryland’s Dennis van Englesdorp, project director for the Bee Informed Partnership, and the entomologist who coined the term “Colony Collapse Disorder.”

This consensus is reflected in the trends of honeybee colonies, which have held steady or increased slightly in the US (22-year high in 2016) since the widespread adoption of neonics in the 1990s. Populations have increased significantly in Canada and Europe, reached a record high in Australia, and are at an all-time high worldwide. 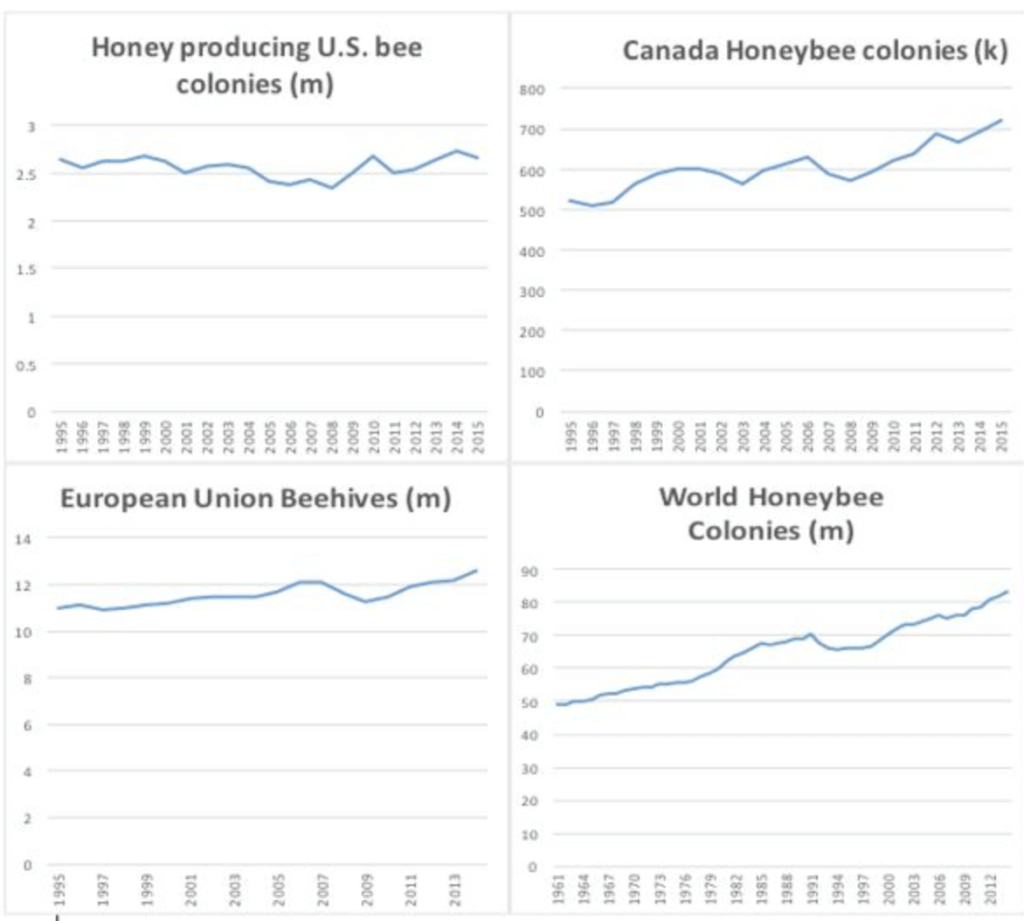 As the GLP has reported, according to Michael Burgett, professor emeritus of entomology at Oregon State University and co-author of the recent USDA report, “The honey bee is in no way endangered.” Entomologists say there are multiple factors contributing to bee health issues, but Varroa destructor mites and the viruses they carry are likely the leading drivers. Nutrition is another big factor. While still an issue, pesticides including neonics have become much less of a hazard in recent decades.

“If there’s a top ten list of what’s killing honey bee colonies, I’d put pesticides at number 11”, Burgett said. As a result of this research, scientists and government officials are targeting a range of actions to control bee diseases and stressors on colonies.

But the narrative about bee health and what should steps should be taken emerging from the European continent is at odds with these views. France, reflecting its hostility to many pesticides and over the opposition of its farmers, is pressing ahead with a full ban on neonics. The European Union is debating a field ban after the European Food Safety Authority concluded in a February 2018 report surveying some 1500 studies that some honeybees and managed bumblebees faced “high risk” from three neonicotinoid insecticides.

EFSA itself did not recommend an EU-wide ban; it’s a risk assessment body, not a regulatory agency. The EU has enforced a temporary ban since 2013 on crops such as sunflowers, oilseed rape (canola) and corn based on a preliminary EFSA assessment. That may now become permanent and extended to other crops. No such ban is under consideration in major agricultural markets anywhere else in the world.

Considering the portentousness of such a decision to bee health and the many crops that rely on the use of neonics because of their effectiveness and low toxicity to beneficial insects compared to the pyrethrins and the organophosphates they replaced, it would be illuminating to review what science, rather than politics, says about the EFSA’s controversial analysis.

The EFSA alarm bells were widely reported by the press and were echoed by environmental advocacy groups as the definitive ‘final word’ on neonics and bees.

“New EFSA reports confirm high risk posed by neonicotinoids to bees,” headlined the Pesticide Action Network, Europe, within hours after the release of the study.

Many EU legislators immediately voiced their support for a permanent ban. A “Total ban on bee-harming pesticides likely after major new EU analysis,” noted the Guardian.

Yet few reporters appeared to have looked beyond the press release. And indeed delving deeper into the EFSA assessments is a daunting and ultimately frustrating experience. To give a sense of the complexity involved, consider the assessment framework EFSA laid out to demonstrate the thoroughness of its evaluation:

According to EFSA, the agency assessed all these exposure modes and crops for the three bee species at three different levels: Tier I screening assessments; Tier II studies that partly field and partly caged; and Tier III full field studies. EFSA also said it conducted a comprehensive survey of all the published scientific literature addressing each of these various permutations. It sounds systematic, and the avalanche of data is certainly overwhelming. Let’s take a closer look.

To begin with, consider this: Only a small fraction of the 1705 assessments reflect partial or full field assessments. The overwhelming majority are based solely on Tier I screening assessments.

Why is this important? “Tier I” studies are “caged bee” studies that examine artificial and often unrealistically high doses of neonics on individual bees. Even when done right (and they often are not) Tier I studies are not designed to give a final answer to a pesticide’s safety. Regulatory scientists use them as a first step that demonstrates whether higher tier testing is needed. The next stage, Tier II or semi-field experiments, are often conducted in large tents and may also feed bees artificially.

For the overwhelming majority of EFSA’s assessments, no Tier II or Tier III data were given. This is especially true for the most important ‘treated crop scenario’—in which neonics are actually applied to crops as coatings on seeds, or “seed-treatments.”

The top tier of bee research, as I’ve written about before (‘Gold standard’ assessing neonicotinoids: Field bee hive studies find pesticides not major source of health issues), are the Tier III, full field studies which look at whole-hive outcomes in bees’ natural environment. There are in fact many high-quality field studies. They are the only studies that even get close to determining how bees are affected in the real world.

These studies have consistently shown that neonics, when examined in real life context in the field, pose few or none of the problems that show up in laboratory studies. Only one—by Sweden’s Maj Rundlof and her team—has ever claimed to have shown an adverse effect on wild bees, and her attempt to repeat the experiment after questions were raised about her methodology and numbers was unsuccessful.

How EFSA, managed to ignore or discount all this information—which ran so contrary to the prevailing narrative—is where the politics may come into play. The central issue is a document called EFSA Guidance on the risk assessment of plant protection products on bees. Known in common parlance as the Bee Risk Guidance Document, or BRGD for short, it lays out how EFSA should conduct its assessment of the environmental safety of neonics.

Science writer and Times columnist Matt Ridley has described it as “a bizarrely one-sided piece of politicised science, written mainly by activist researchers with a conflict of interest.” Professor, columnist and frequent contributor to GLP, David Zaruk, has detailed how the document appears designed to disqualify realistic studies conducted in the field and force regulators to rely more heavily on lab studies instead, as it seems EFSA has done. Three examples of how the BRGD appears to have excluded or discounted field studies:

Inflammatory media stories, lobbying by organic groups and the NGO social media echo chamber appear to have won the day in Europe. It is well known that if the BRGD were applied consistently, no pesticides would ever be allowed, including organic ones. That’s one reason why EU Member States called for revisions to the document in 2013 when the temporary ban was put in place. At the time, EFSA and the Commission acknowledged the need to amend the BRGD.

But 5 years later, they used the outdated document for the massive EFSA review and as the basis for considering making permanent a ban they know full well, from their own investigation, is already forcing farmers to switch to older, broadly sprayed pesticides that are much worse for bees and have to be used in much greater quantities.

Politicians appear poised to expand the ban to almost all uses, even on crops bees never visit. When that happens, and it appears a near certainty, the greatest victim will be the continent’s bee population, which has been on an upward trajectory the entire time neonics have been on the market.

Global environmental advocacy groups—and of course the media—continue to exert enormous political pressure in the United States to follow suit.

A version of this article previously ran on the GLP on April 26, 2018.