This article or excerpt is included in the GLP’s daily curated selection of ideologically diverse news, opinion and analysis of biotechnology innovation.
Each year the California Department of Pesticide Regulation (CalDPR) collects produce samples from multiple steps between the farmers and consumers. They recently released their results for 2018. They tested a total of 3,666 samples of 140 different crops grown in California, other US states and items that were imported from 25 different countries. For each sample they analyzed for 400 different pesticides or their known breakdown products.  This is also part of an enforcement program, so it is great that they are still so transparent with their findings. 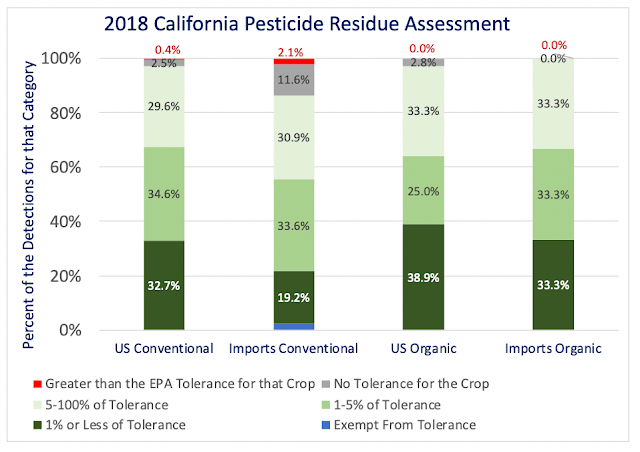 As with previous surveys, the results document the fact that the growers who produce our food are following the EPA label requirements that are designed to insure that by the time it gets to consumers, produce is quite safe.  That safety standard is based on national standards set by the EPA. For 78% of the crops there we either no detectable residues or residues below the legal limits. Few of the remaining examples were at all problematic

Particularly for the US grown samples, excessive concentrations were very rare. There were some residues of chemicals found which are not technically supposed to be used on a particular crop, and as in the past, most of these “no established tolerance” cases involved the imported items. 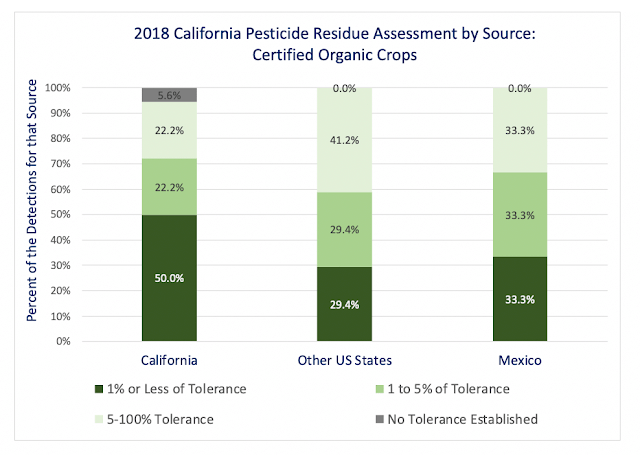 The residue issues varied quite a bit by source. Those from different parts of the US were similar, but those from China, Mexico and Central America had more cases of “no tolerance.” Perhaps the best profile was for crops imported from South America. 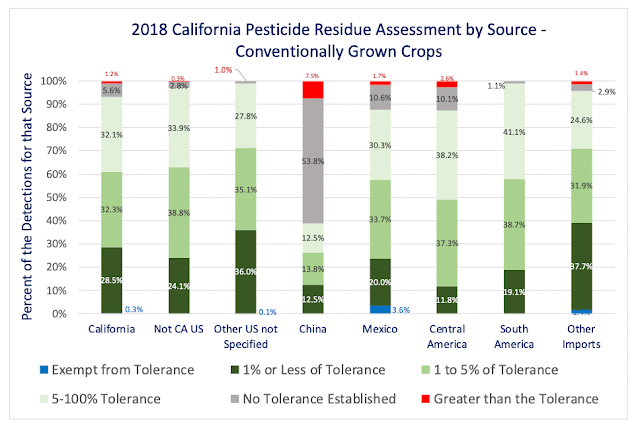 301 of the items were being sold as “Organic.” The rule for organic set by the USDA is that no detected residues should exceed 5% of the EPA tolerance. In 2018, only 55.4% of detections from organic samples met that standard so they should not have been sold as “USDA Organic Certified.” Imported organic residues over 5% of the tolerance made up 66.7% of detections, which is very similar to that same measure for domestic conventional produce. 55.4% of the detections on imported conventional crops would not have disqualified them if someone was trying to sell them as organic.  Below is the list of specific pesticide residues that were found on organic samples.:

Those who think they are buying something safer by spending more for organic might want to rethink that logic. Only the 16 spinosad detections represent something allowed for use on organic, and organic still has the legacy of residual DDT metabolites like DDE.

While CalDPR made it very clear that this report was good news, they called out seven commodities for which they thought the residues could be a legitimate health concern. These are Dragon Fruit (Vietnam), Chayote (Mexico), Lychee (China), Cactus Pear (Mexico), Star Apple (Vietnam)m and Tomatillo (Mexico). They also added Star Apple from Vietnam and Guaje from Mexico because of products in those countries for which there is no set tolerance. 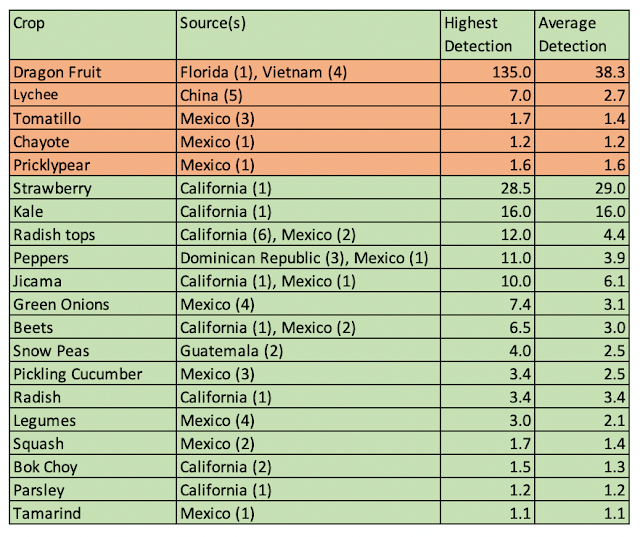 Once again this is evidence that our food supply is safe and also incredibly diverse. This testing program is different from the USDA’s Pesticide Data Program (PDP) in that it includes a number of more exotic items. However it also includes many more mainstream fruits and vegetables and among those there were no above-tolerance detections. But in both cases the takeaway is that we should enjoy our fruit and vegetable options and consume them as part of a healthy lifestyle.

Steve Savage is a plant pathologist and senior contributor to the GLP.  The Pop Agriculture podcast is available for listening or subscription on iTunes and Google Podcasts. Follow him on Twitter @grapedoc