Do GMO foods or glyphosate cause gluten allergies?

This article or excerpt is included in the GLP’s daily curated selection of ideologically diverse news, opinion and analysis of biotechnology innovation.
The internet is exploding with stories about the supposed dangerous link between one disease or another and genetically modified foods. One of the more intense debates revolves around what appears to be a recent surge in gluten allergies. Merely typing in “GMO and gluten” into Google yields more than 500,000 mentions, with most of those generated by various “green” and anti-GMO groups.

The claims can be traced to an obscure essay, “Glyphosate, pathways to modern diseases II: Celiac sprue and gluten intolerance,” published in 2014 in a Slovakian predatory ‘pay for play’ journal by two scientists—MIT computer researcher Stephanie Seneff and Anthony Samsel, who identifies himself as an “independent scientist and consultant”. Neither has any known expertise in genetics or toxicology. They speculated that trace exposures to the common herbicide glyphosate, which is used in conjunction with some GMOs, could account for what they claim is a rise in celiac disease and gluten intolerance. 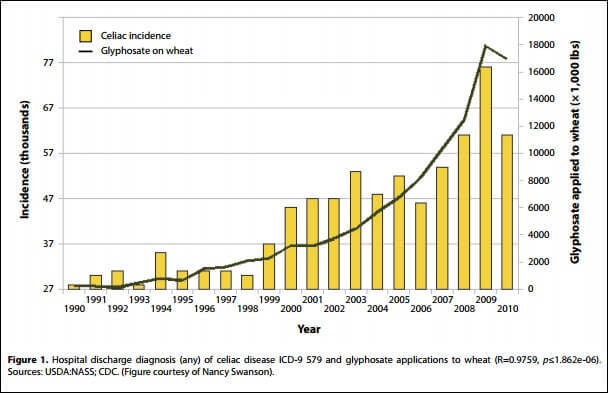 The essay, which received no attention in the mainstream science community when it was first released, was then circulated far and wide in a press release issued by the Institute for Responsible Technology, a one-person NGO founded by Jeffrey Smith. Before becoming an anti-GMO activist, Smith studied business at Maharishi University of Management in Iowa, which bases its curriculum on transcendental meditation. He has developed an international following promoting two self-published books and multiple appearances on the Dr. Oz show criticizing crop biotechnology as dangerous.

Do GMOs or the herbicide glyphosate create gluten allergies, as these scientists and many green groups allege?

To investigate these claims, it is necessary to understand the difference between gluten sensitivity and Celiac disease, and to determine whether there has been an increase in the incidence of these conditions. Gluten is a protein composite found in wheat and other grains. It helps dough rise and gives it that delicious chewy texture, and has been in our diet for over 10,000 years. Individuals who have autoimmune reactions to gluten have Celiac Disease, which is characterized by irritation in the small intestine. Over time, the condition leads to the loss of the lining of the gut and patients may lose the ability to absorb nutrients. There are both environmental and genetic factors that play a role in susceptibility to the disease.

There are two additional categories to gluten allergies: allergies to wheat, and the newly labeled “gluten sensitivity”. The former is what you might consider a “standard allergy”: skin reaction, wheezing, etc. The latter consists of cases in which there is neither an allergic nor an autoimmune reaction, but individuals experience “distress” when eating wheat and other grains. They might have some of the symptoms of celiac disease (such as bloatedness or diarrhea) and feel better when they cut gluten out of their diets. A key distinguishing characteristic is that their small intestine is usually normal. It’s difficult to diagnose because there’s no real immune response and it’s subject to a placebo effect. In addition, there’s a whole slew of symptoms for “gluten sensitivity” (also known as “non-celiac gluten sensitivity“), including eczema, headaches, fatigue, depression, anemia, joint pain etc.

The stats for Celiac disease seem to be scattered. Two decades ago, it was considered to be extremely rare in the United States (1:10000). But more recent studies, with more accurate methods of detection, place the incidence rate as high as 1:33 or 1:57. So, it seems like the increase in incidence may have to do with our methods for diagnosis and definition of the disease. Additionally, and as mentioned above, “gluten sensitivity” is a category that has only recently been added to the medical lingo. Its diagnosis is most accurately done through a “double-blind, placebo-controlled gluten challenge test“, which is not easy to do, so it’s possibly being over-diagnosed (and in many cases self-diagnosed). In a double-blind test, 68% of patients receiving gluten had clinical symptoms, versus 40% of those receiving the placebo.

A review in late 2015 in Nature pointed out that our change in diet may also be a cause for the increase in gluten-related disorders. The authors note that the spread of the Mediterranean diet, increase in the amount of gluten used in the production of bread, mechanization of farming and overall increased use of wheat, may all be contributing to “gluten-related pathology”. A paper published in 2010 in Theoretical and Applied Genetics identified that the variety of wheat we use today has more gluten than varieties that were cultivated over 100 years ago. As such, traditional plant breeding may be a contributing factor to the increase in gluten-related sensitivities.

So now we get to the key question: do GMOs have anything to do with the “increase in gluten allergies”? 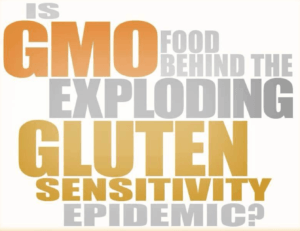 Despite the sheer volume of hits on Google, a search in PubMed found zero studies linking the two. Anti-GMO campaigners postulate two primary hypotheses as to how GMOs cause gluten sensitivity. The first is that glyphosate may kill the healthy bacteria in the gut, leading to a bacterial imbalance. The second is that the Bt-toxin, found in Bt-resistant GM crop, punctures holes in human cells (in this case, the gut), leading to a leaky gut.

The Celiac Disease Foundation (CDF) challenged the hypotheses propagated by the Institute for Responsible Technology, stating that it was speculation. The scientists at CDF pointed out that patients with Celiac Disease or gluten-sensitivity feel better when they cut gluten out of their diets. If the cause of their sensitivity were GMOs or glyphosate, then they’d have to cut out a lot more than just gluten.

But in my mind, the greatest evidence that GMOs are not tied to gluten allergies is that GMO wheat is not on the market. Seneff and Samsel’s paper shows a graph in which an annual increase in the rate of Celiac Disease since 1990 loosely correlates with increase in the amount of glyphosate applied to wheat. However, wheat is not a glyphosate resistant GMO. 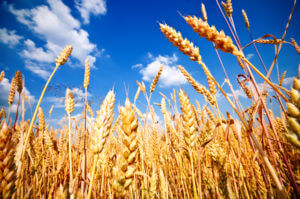 Genetically modified wheat has never been commercialized. Seneff and Samsel postulate that the increase in glyphosate use on wheat is due to pre- and post-harvest uses of glyphosate, but the authors cherry-pick data from global statistics to support their claims and to ensure that the numbers match their model.

The Seneff and Samsel paper was hyped in a credulous report by Reuters by former reporter Carey Gillam, who subsequently was forced out at the news service; she now writes for the organic industry-funded US Right to Know, which attacks scientists and journalists engaged in the crop biotechnology debate. But because Reuters is perceived as a credible news outlet, the Gillam puff/scare piece led to thousands of additional web stories, before mainstream scientists began to weigh in. Many scientists and journalists have since highlighted additional flaws in the paper–which really isn’t a paper since it lacks any real data.

If I write an article suggesting how a unicorn could arise, would anyone state that a unicorn exists? In fact, here’s my hypothesis: “The evolution of species suggests that mammals arose through a common ancestor forming the basis of the Laurasiatherian clade. Due to the commonality of their lineage, the narwhale (Monodon monocerus) and the horse (Equus ferus caballus) possibly share over 80% of their genes. We propose that the mythical Unicorn (Unicornus ficticious) may arise through the in vitro fertilization of an equine egg and a narwhale sperm.” My paper will have a lot of information on how whales and horses are related and even show an amazing graphic of a gene where nearly 100% of the amino acid sequence is conserved, and it will be brimming with information from papers that have tried interspecies in vitro fertilization.

An interesting side tidbit is that if the gluten-free trend continues, there may be financial reasons to produce low-gluten GMO wheat. According to gmoanswers.com, there are two papers that have been published where they’ve managed to decrease the amount of gluten produced in wheat (one in 2010 and the second in 2011). It would be a crazy random happenstance if we had to turn to GMOs to address an issue that may have arisen through traditional plant breeding.

A version of this story originally appeared on the GLP in December 2016.

Layla Katiraee holds a PhD in molecular genetics from the University of Toronto. All opinions and views expressed are her own. Follow her on Twitter @BioChicaGMO