This article or excerpt is included in the GLP’s daily curated selection of ideologically diverse news, opinion and analysis of biotechnology innovation.
To meet a growing global demand for wheat, scientists and policy makers are calling for wider use of new breeding techniques in a quest to increase yields and fight pests, disease and climate change.

While other key commodity crops – including corn, soybeans and cotton – have been tweaked and improved through genetic modification, wheat has largely been left in the hands of conventional breeding techniques. The last major improvement in the wheat sector came during the Green Revolution of the 1970s, according to a March 2019 paper by a group of researchers from China, Ukraine, Australia and Kazakhstan. They wrote:

The Green Revolution of the 1970s achieved enormous yield gains via the introduction of disease resistant semidwarf high yielding wheat varieties developed by Dr. N.E.Borlaug and colleagues. Since that time, however, global wheat production has stagnated, and current trends show that yields will not be sufficient to meet growing market demands.

That needs to change, according to a group of 900 scientists and policy makers from 50 countries gathered in Saskatoon, Canada, in late July to discuss the progress of wheat breeding across the globe. The meeting was organized by the International Maize and Wheat Improvement Centre (CIMMYT) in Mexico in partnership with the International Centre for Agricultural Research in the Dry Areas (ICARDO) based in Morocco and the University of Saskatoon.

Among other prominent topics for discussion wheat breeders apart from application of other technologies which have so been used in wheat breeding is gene editing the way to go now.

If nothing is done, current breeding techniques may begin to lose their effectiveness, said Dr. Martin Kropff, CIMMYT’s general manager. 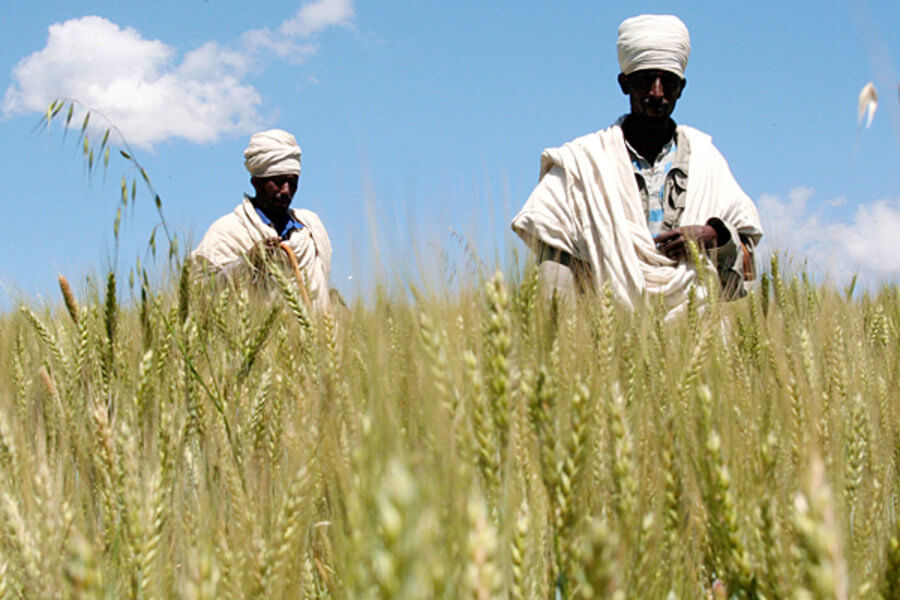 He explained that in spite of its key role in fighting hunger and malnutrition, wheat faces a threat from droughts, flooding, pests and diseases, including the UG99 virus discovered by Ugandan scientists in 1999 and now threatening to spread across the world.

The development in molecular genetics in wheat has been relatively slow especially when compared to other crops such as maize and rice, Kropff said. This is mainly because of the complexity of its genome.

He said the techniques scientists are using in wheat breeding now involve the application of molecular markers used in assessing genetic variability between genotypes in plant DNA. Scientists are applying mutation breeding where they apply X-ray lights to irradiate seeds to get desirable traits. And DNA analysis is helping breeders identify which varieties hold the most potential:

This already has an impact because scientists have been able to breed varieties which are disease and pest free including varieties that can with stand notorious climate change effects.

This has helped western countries, where consumers are able to consume wheat containing essential nutrients such as vitamin A, iron and zinc. This is seen, he said, in the way scientists in the Western world advise people to eat whole wheat grain and half-processed wheat products in order to attain folic acid efficiency.

CRISPR/Cas9 is now the technology to adopt in the 21 century. It is precise, scientists can use it to delete add genes within the plant to develop varieties with appropriate zinc, iron and vitamin A content suitable for human body, disease and pest resistance and drought tolerant varieties for increased yields.

The use of CRISPR has allowed researchers to accelerate the breeding process. What once took 12 years, now takes two years, he said.

Thus far, Montana Bio Agriculture has edited three genes in wheat varieties in the quest to develop drought-tolerant strains. Thus far, these have only been grown in greenhouses, though the eventual goal is move them to African soils to test against heat stresses.

On the disease front, Budak said breeders are working on a solution to stem rust disease, which has been hurting crops in the US, particularly in Colorado. His team is working on editing genes in wheat varieties grown in this region to resist the disease.

CRISPR represents one of the more promising tools available to fight many of the obstacles and challenges facing wheat production, said Dr. Dave Hodson, a breeder at CIMMYT.

He said the first successful genetic transformation of common wheat was conducted at the University of Florida, where researchers supported by Monsanto bred the first GMO wheat in the early 1990s.

Monsanto attempted to commercialize GMO wheat in the early 2000s, but backed off after meeting resistances from US farmers, who feared rejection by international markets. In the past decade, interest in GMO wheat has been rekindled, with US farmers asking for the development of varieties similar to those created for corn and soybean farmers.

As CRISPR gene editing grows in popularity, it’s not surprising that breeders would look to this as another tool – instead of relying on the transgenic techniques responsible for most of current GMO crops. Said Hodson:

Scientists in the medical sector have used this technology in developing vaccines and this is now moving to crop breeding because it an evolutionary technology application to modern plant breeding.

Lominda Afedraru is a freelance science journalist in Uganda who specializes in agriculture, health, environment, climate change and marine science. Follow her on the Daily Monitor web site www.monitor.co.ug, Facebook or Twitter @lominda25