If we want to go to Mars, we’ll need to figure out how to feed our astronauts. Synthetic biology can help.

Space tourism, once the domain of science fiction writers, is now an active pursuit of space-tech entrepreneurs. It’s the most likely place that any of us non-astronaut humans will spend any extended time away from our home planet— especially if we could still order from Amazon on the moon. But beyond the thrill of peering at Earth in the distance while tottering along in one-sixth Earth’s gravity, the moon is a barren place with little to recommend it prolonged human presence.

Enter Mars. It was once a wild fantasy to think of Mars as a human destination. At an average of 140 million miles from Earth, it’s not easy to get to. And sustained living there isn’t easy either. There’s no breathable air or liquid water, and the atmosphere is a brisk -80 degrees Fahrenheit. These conditions may not appeal to many. But to the intrepid explorer, Mars is the new frontier. 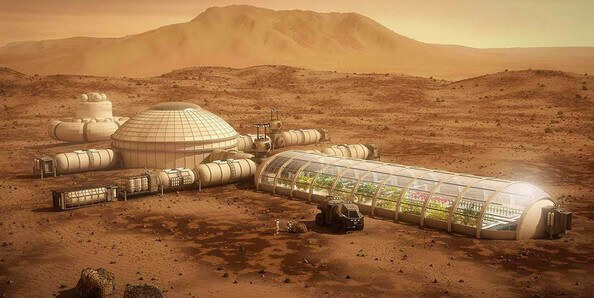 Is space really the answer?

Some of you may be thinking, “Should we be spending time and money sending humans to Mars when our home world is in crisis?” This is a fair and necessary question. The technology needed to live off-world is critical to help us survive the climate emergency on this one. For Adam Arkin, Director of CUBES (the Center for the Utilization of Biological Engineering in Space), the solutions to living on Mars and adapting to climate change are essentially the same.

“Mars is an example of an already desertified planet. If you look at our planet, temperatures are rising at extremely high rates. Our job now is to build a technology that can work on both new planets and [Earth] as it evolves,” says Arkin.

Luckily, CUBES doesn’t need to reinvent the whole wheel. When it comes to life-support, NASA already has over 60 years’ experience making the best air and water filtration systems in existence. But there’s one critical system no one has ever built: food production.

No Mars mission can get off the ground lugging multiple years’ worth of food from Earth. The current shipping cost to Mars is $10,000 per pound. Besides being scientists and engineers, early Mars explorers will also need to be farmers. But it’s not enough to send microbes in a packet and grow protein blocks. The food also needs to taste good.

Space is a difficult and isolated environment, so a little comfort food goes a long way.

“The psychology of food matters, variety matters, taste matters, texture matters,” says Arkin. Crews on the International Space Station have regular pizza parties. Arkin says ice cream is a popular request. “The fact is, one simply does not leave [Earth] without [the ability] to produce these things.”

Of course, it’s not all about pizza and ice cream. Though they are important, the central focus is growing vegetables — on a planet where nothing grows. Mars may be hard on humans, but it’s even harsher on plants. It’s further from the sun than Earth, meaning there’s less light for photosynthesis. To address this, a CUBES task led by Bruce Bugby is engineering crops that can use a broader range of light to convert CO2 and water into food. This same project also works to reduce the water needed by crops while increasing their overall harvest. The early results are promising. If it pans out, farmers and consumers alike would benefit from crops that produce more food using less water and light.

Of course, these kinds of advanced crops don’t just benefit Mars, and the implications for Earth are clear. Earth’s population is projected to reach 10 billion by 2050. But without significant changes to our current food production methods, we will face severe food shortages by mid-century. Crop engineering is a critical tool for closing the growing food gap.

But food is only one challenge. What happens if you get sick on Mars, where the nearest pharmacy is 130 days away by space shuttle? Hippocrates suggested we let food be our medicine — and that, indeed, may be the solution to living healthily on Mars. Karen McDonald’s CUBES team, the Food and Pharmaceutical Synthesis Division, is working on making food pharmaceutical as well as nutritious and mood-boosting.

Martian astronauts will need a whole host of medications to stay healthy, particularly for bone density and immune system response. But it’s not practical to bring along hundreds of pill bottles. Besides the transport costs, Mars’ elevated radiation levels decay medications more quickly. There’s also no way of knowing exactly what astronauts will need.

Using gene-editing techniques like CRISPR, McDonald’s team aims to produce lettuce that’s also an antibiotic or a pain killer. Once grown, astronauts could extract medication from the plant, or just simply eat it with dinner. Here again, this kind of synthetic biology innovation has tremendous potential on Earth. Medically functional food has the power to democratize access to medicine and nutrition, especially in underserved communities and developing countries.

Closed-loop is the way of the future

CUBES’ food production plans are exciting on their own. But they are part of a much greater whole. The zero-waste system will also be able to transform rocky Martian dirt into fertile soil as well as produce biofuels, microbial feedstocks, and 3D printed biopolymer tools. It’s not just about closing the loop for space travel. As resources dwindle, closed-loop systems will be essential for our survival on Earth.

“The [CUBES] system should be able to support nine astronauts for their food and pharmaceutical needs over nearly a year on-planet using nothing but sunlight and carbon dioxide. Imagine if you had those [systems] here,” says Arkin.

Integrated bio-factories and aspirin-lettuce may sound like the stuff of science fiction. But then again, so did space travel itself not too long ago. True, the technology is years from actualization, let alone broad market reach. But it’s this kind of integrated thinking and innovation that can solve the most critical challenges humanity has ever faced, both on Earth and amongst the stars.

John Cumbers is the founder and CEO of SynBioBeta, the leading community of innovators, investors, engineers, and thinkers who share a passion for using synthetic biology to build a better, more sustainable universe. He is a former bioengineer at NASA and earned his PhD in Molecular Biology, Cell Biology, and Biochemistry from Brown University. Follow him on Twitter @SynBioBeta or @johncumbers

A version of this article was originally published at Forbes and has been republished here with permission.