This article or excerpt is included in the GLP’s daily curated selection of ideologically diverse news, opinion and analysis of biotechnology innovation.
Author and animal-rights activist Jonathan Safran Foer [author of the book Eating Animals] recently argued in a New York Times essay that the COVID-19 pandemic represents a turning point in society’s attitude to eating meat. “Animal agriculture is now recognized as a leading cause of global warming,” writes Foer. “A quarter of Americans between the ages of 25 and 34 say they are vegetarians or vegans, which is perhaps one reason sales of plant-based ‘meats’ have skyrocketed… Our hand has been reaching for the doorknob for the last few years. Covid-19 has kicked open the door.”

I agree the pandemic presents the best opportunity in a generation for animal-rights advocates to win over skeptics. But if and when vegetarian and vegan diets become truly mainstream, it will not be for the reasons Foer emphasizes.

Foer provides three main rationales for rejecting meat: (1) “We cannot protect our environment while continuing to eat meat regularly,” (2) we can live “longer, healthier lives” without animal protein, and (3) many forms of animal farming are both cruel and unhygienic. These are valid arguments that inspired my own conversion to veganism a decade ago. But I’ve learned that such stories as mine are relatively rare. Indeed, my own experience suggests that, ironically, turning animal rights into a truly mainstream phenomenon will require that we reject, rather than embrace, the movement’s activist roots. 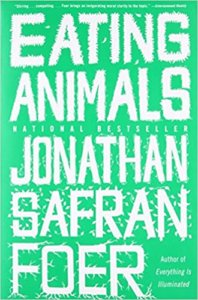 For decades, the animal-rights movement has approached the public with the aforementioned evidentiary trifecta of environment, health, and animal suffering. But polling data suggests that this pitch has serious shortcomings. According to a 2016 Pew report entitled The New Food Fights, at best one-tenth of American adults claim to be nominal vegetarians or vegans. And even that estimate overestimates the true number, because, as the report notes, “some people who consider themselves either vegetarian or vegan are ‘flexible’ about what they eat and at least occasionally veer from these eating principles.” The share who call themselves “strict” vegetarians or vegans is only about three percent.

As Foer notes, the vegetarian demographic skews heavily toward younger survey respondents. But it also skews toward bicoastal and liberal. (According to Gallup, “11% of self-identified liberals identify as vegetarian, compared with 2% of conservatives and 3% of moderates.”) Gallup data suggest that the overall share of Americans who say they avoid meat has been somewhere in the mid-to-high single digits over the last two decades, despite growing public consciousness in regard to vegetarian/vegan diets and plant-based alternatives. Yes, greater knowledge of the health risks associated with meat consumption has led most Americans to express a greater desire to cut back on meat consumption. And many have done so, but few have abandoned meat entirely.

A more promising route lies with the group dubbed “flexitarians,” the category name sometimes applied to partially lapsed vegetarians, or to those who depend on plant-based food for daily sustenance but consume meat on special occasions. (Other terms include “semi-vegetarian diet” or SVD.) As a 2019 report published by Barclays revealed, 92 percent of plant-based meals in the UK are consumed by such flexitarians. Pollsters at YouGov report that flexitarians comprise 14 percent of Brits sampled, nearly quadruple the number of strict vegetarians and vegans combined. This is the core group, both financially and demographically, that will help us enlarge the animal-rights tent.

Unfortunately, many activists within the movement too often rely on public shaming as a means to win over the public. Flexitarians often are scorned within vegetarian/vegan social-media circles, rather than welcomed. “The Amazon rainforest is aflame, and flexitarians want a cheat day?” a headline from PETA proclaimed. Such messaging may please purists, but will do little to convince those who are still on the fence.

Foer is correct that COVID-19 presents an opportunity, because the effect of a crisis is often to encourage people to reassess their life choices. As has been widely noted, COVID-19 may have crossed over to humans through a live-animal market in China. As the chief communications officer for Impossible Foods (creator of the plant-based “Impossible Burger”) told Vox in early May, “people don’t like to be contributing to climate change and biodiversity collapse and pandemics. It feels icky, so we try not to talk about it. [But] in these moments, when the gruesome reality of animal agriculture pierces into our consciousness—because of COVID or whatever else—that we start to wake up.”

Of course, zoonotic diseases—infectious agents that make the jump to humans from animal populations—have become a too-common feature of modern society. But COVID-19 has led to a pathogen-related global disruption not witnessed since the Spanish flu a century ago. More people are eating at home, enjoying meals with their family, learning new recipes, and rethinking food choices in the process.

At least 20 meatpacking plants closed in the United States following disease outbreaks, leading to scores of dead employees. Such shutdowns have reverberated throughout the supply chain. The consequent supply backlog, as Foer writes, has led to slaughterhouse workers now injecting pregnant sows to induce abortions, with some even euthanizing whole herds. The closing of borders has left the international meat trade log-jammed as well, causing rising prices. American consumers could face a meat shortage, and turn to plant-based alternatives by necessity. Over time, some may conclude that they should have made the switch a long time ago.

Indeed, the effect of COVID-19 is already in evidence. According to Gardein, a producer of fish, chicken, and beef alternatives, almost 40 percent of recent purchases have been driven by “first-time customers.” Nielsen, a market research group, notes that plant-based meat alternative sales have increased nearly three-fold since this time last year. Impossible Foods, which began selling its Impossible Burger earlier this year in just 150 grocery stores, has just announced the expansion of its retail presence to over 1,700 Kroger-owned outlets.

Foer’s descriptions of factory farming aren’t wrong. But we may have already reached the saturation point in regard to how much these descriptions can move the needle on public attitudes. As one movie character famously remarked, “Just cause people wanna eat the burger doesn’t mean they wanna meet the cow.” Most of us are driven by our taste buds, and the drive to produce plant-based products that please the palate is really the final frontier in this battle. A recent report published by Deloitte concludes that a fifth to a quarter of “non/infrequent” eaters of meat alternatives would migrate to these products if they “taste like meat,” offer “more exciting flavours,” and “have the same texture as meat.”

All of these improvements are starting to happen. Even back in 2018, vegan steaks created by the Dutch firm Vivera sold out 40,000 units within a week of hitting supermarkets. The following year, KFC premiered a plant-based chicken alternative at a location in Atlanta. According to one company representative, the restaurant sold “as many plant-based boneless wings and nuggets [in a single day] as it would sell of its popular popcorn chicken in an entire week.” I can attest that just a decade ago, most vegetarians and vegans would have struggled to find much in the way of appetizing fare at Subway or Burger King. Today, that isn’t a problem. What the purists sometimes forget is that people simply love meat. And it’s hard to recruit them to your cause if you make them feel like monsters for doing so.

Even prior to the pandemic, Barclays was predicting that the alternative-meat industry could grow ten-fold by the end of the next decade. And COVID-19 will accelerate this shift. But it will not take place overnight, and it will be a battle won more through delicious, meatless meals than through strident rhetoric. Though I understand why Foer is in a big hurry, the most effective approach will be to welcome new adherents—be they vegan, vegetarian, or merely flexitarian—without insisting that everyone else is doing something wrong.

Ari David Blaff is a freelance journalist and graduate student based out of Toronto. His writings have appeared in National Review, Tablet, and Israel Studies. Follow him on Twitter at @ariblaff.

This article originally ran at Quillette and has been republished here with permission. Quillette can be found on Twitter @Quillette