Even though the average life-expectancy for humans continues to rise, living longer is often associated with age-related health issues.

Now, a group of researchers from Switzerland have identified new approaches to improve health-span in a fast-growing aging population. For many years, scientists speculated that chronic low-grade inflammation accelerates aging processes and the development of age-related disorders. An international team of researchers has now demonstrated that visceral adipose tissue, known as belly fat, crucially contributes to the development of chronic low-grade inflammation.

Their work is published in the paper, “Eosinophils regulate adipose tissue inflammation and sustain physical and immunological fitness in old age,” in Nature Metabolism.

The authors noted that adipose tissue eosinophils (ATEs) are important in the control of obesity-associated inflammation and metabolic disease. However, the way in which aging impacts the regulatory role of ATEs remains unknown. In this work, the team shows that certain immune cells play an essential role in regulating chronic low-grade inflammation and downstream aging processes. And, that restocking fat tissues of old mice with eosinophils prevents age-related declines in physical and immunological functions.

As a consequence, aged animals showed significant improvements in physical fitness as assessed by endurance and grip strength tests. Moreover, the therapy had a rejuvenating effect on the immune system manifesting in improved vaccination responses of aged mice. 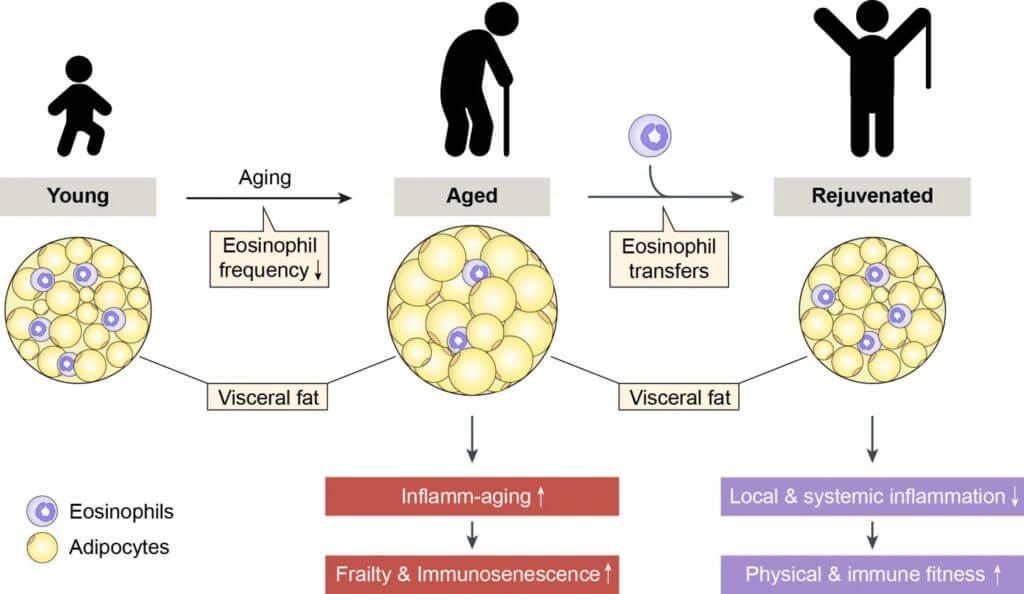