Viewpoint: Fast-growing GMO salmon poised to hit US stores in 2020, but why did it take 30 years?

This article or excerpt is included in the GLP’s daily curated selection of ideologically diverse news, opinion and analysis of biotechnology innovation.
In a few months, the first transgenic (GMO) salmon will be sold in the US, produced in an AquaBounty farms facility in Indiana. The story will go unnoticed, buried by the infodemic related to COVID-19. However, it is an announcement that the biotech community has been awaiting for 31 years.

Aquaculture operations produce 2.5 million tons of salmon annually and the main producers are Norway, Chile, the United Kingdom and Canada. In general, fish farms are responsible for producing more than 50% of all the fish we consume. Imagine you have an idea to double the growth rate of farm-raised salmon through a simple genetic modification, getting it to market size in half the time (18 months vs. 36) while consuming fewer resources.

Imagine doing all possible tests, for more than 20 years, to show that the only difference between transgenic and non-transgenic salmon is the intended difference: their growth rate. There are no organoleptic differences (flavor, texture) or variations in the composition of the meat, nor is there any problem when consuming it.

Suppose you also do all the necessary biosecurity testing to confirm that production is sustainable and safe for the environment, making an escape into the wild practically impossible. This is achieved through the introduction of multiple geographical barriers: farms on land, far from the sea or any river or lake; redundant physical security measures; and facilities that only produce sterile, female salmon. Even assuming there were any leaks, multiple studies and the FDA review itself indicate that there would be no significant impact on the environment.

Imagine that you finally get official authorization to produce and sell these GM salmon. Now imagine that all this started in 1989 and you’ve had to wait 31 years to bring this biotech product to US consumers, which looks like it is going to happen this fall. What company is capable of waiting 30 years without being able to place its product on the market? How many rounds of investors will it have to organize to keep confidence alive and contain the impatience of successive boards of directors? This is what AquAbounty has had to face.

Europe will have to wait

In Europe, with regulations that usually limit biotechnological advances, we are still much further from achieving this. We will have to content ourselves with reading this news in the papers and waiting to make a trip to the US to taste the first transgenic animal authorized by the FDA—quite possibly the most analyzed food to ever be sold in grocery stores.

The history of transgenic salmon (which now have the trade name AquAdvantage) dates back to 1989. It was then that the first specimens were born using a very ingenious gene construction, all fish. This means that all their genetic elements came from similar fish, without including segments from unrelated animals. The publication of these results would not take place until 1992 , 28 years ago. The researchers reported very significant increases in growth rates, between 2 and 13 times faster than normal. The initial authorization to produce these fish for food was not granted until November 2015.

How to make a transgenic salmon

The transgene that was microinjected into Atlantic salmon embryos ( Salmo salar ) in 1989 was called opAFP-GHc2 and consisted of three DNA fragments, all derived from other fish.

First, the promoter of the gene encoding the antifreeze protein (AFP) was obtained from a benthic fish from the Atlantic Ocean called Macrozoarces americanus. This promoter directed the expression of a cDNA (complete copy of the RNA of a gene converted to DNA thanks to reverse transcriptase) of the gene that encodes the growth block of the Pacific salmon ( Oncorhynchus tshawytscha ). Finally, this gene construct included a transcriptional terminator similarly derived from Macrozoarces americanus. 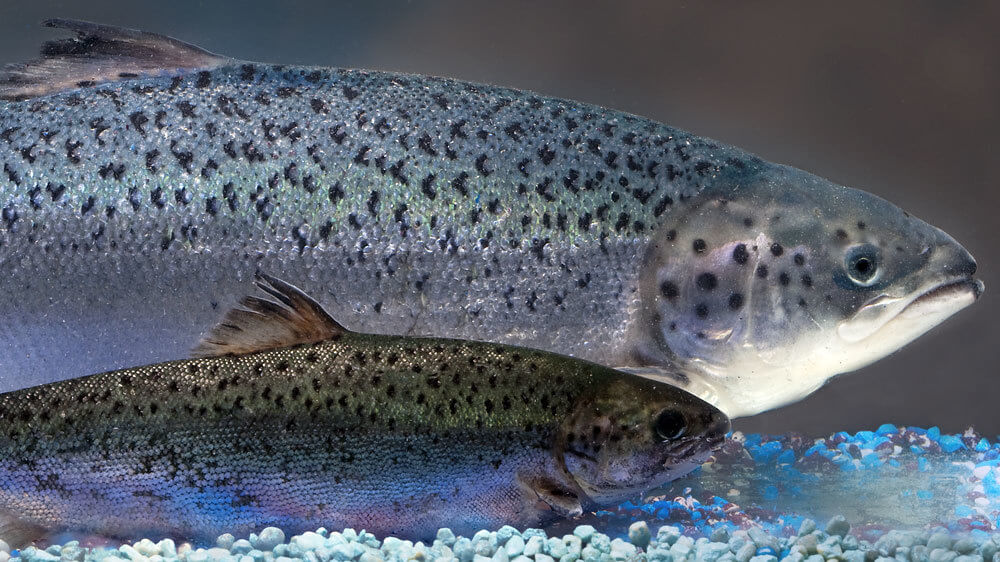 The gene for the AFP antifreeze protein turns on in the cold and allows these fish to survive in icy waters below freezing temperature. It acts as a natural antifreeze for these animals. Here, only the regulatory elements of the AFP gene are used to activate the expression of the Pacific salmon growth hormone gene in cold weather.

The idea is to take advantage of this genetic trick to maintain a constant supply of growth hormone throughout the year. In general, Atlantic salmon only grow in the warm spring and summer months, when they activate their own growth hormone gene. But in the fall and winter this gene is turned off and the animals stop growing. With this transgene, the production of this second source of growth hormone is activated during the cold months.

This ensures that there is enough growth hormone throughout the year to allow a sustained increase in size. This reduces the time it takes to reach commercial size from 36 to 18 months, half the time, with lower feeding costs (25% of what it would cost to feed non-GMO salmon).

Naturally, these salmon have had to face terrifying smear campaigns referring to them as  “frankenfish.” The FDA received more than 1.8 million letters opposing its approval of the GMO salmon. Politicians were influenced, for example, by traditional Alaskan salmon farms that saw their business model threatened by a company able to put salmon on the market in half the time and with considerable savings in production costs. Many lies have been told to negatively influence the opinion of Americans, despite initiatives that debunk such fears with scientific evidence and corroborate the safety, for consumers and the environment, of the production of these transgenic salmon. 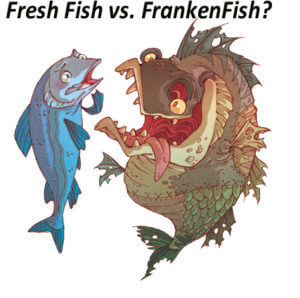 After approval by the FDA , Canada also approved the marketing of these salmon, and as early as 2017, it was announced that AquaBounty had sold the first 4.5 tons of salmon in the country. These first salmon came from the fish farm that AquaBounty established in Panama, which was authorized by the FDA after the company produced the sterile (triploid) eggs at a facility on Prince Edward Island, Canada. A production facility in Indiana was approved by the FDA in 2018. It is from this fish farm that the first genetically engineered salmon will come, which can now be sold in US supermarkets.

Finally, the carbon footprint left by salmon farming is ten times lower than that derived from beef production (2.9 kg of CO₂ per kg of salmon produced compared to 30 kg of CO₂ per kg of meat cow). The need to produce food for a growing world population will double by 2050, when it is expected that there will be nine billion people on the planet, according to the FAO. Traditional agriculture, livestock and fish farming will be unable to produce all the necessary food. That is why it is necessary to utilize biotechnology, both for animals and plants.

It would have been nice if transgenic salmon could have reached consumers sooner than 31 years after it was developed. Hopefully, the next genetically modified ( or gene-edited ) product intended for consumption doesn’t have to wait that long to hit American tables.

In the meantime, Europeans will continue to read the news from across the Atlantic and watch, once again, as the trains of innovation and progress go by—trains that go at full speed and, for the moment, still have no stop in Europe.

Lluís Montoliu is a molecular biologist at the National Center for Biotechnology in Spain. Visit his website. Find Lluís on Twitter @LluisMontoliu

This article originally ran at The Conversation and has been republished here with permission. It has been translated from Spanish and lightly edited for clarity. Find the Conversation on Twitter @ConversationUS