This article or excerpt is included in the GLP’s daily curated selection of ideologically diverse news, opinion and analysis of biotechnology innovation.
Summer is a great time to grill steaks and hamburgers…they were definitely featured in our Fourth of July BBQ! We enjoyed them with a variety of tomatoes and lettuces from our garden. But hearing about the perils of consuming red meat on various podcasts, websites, and interviews quickly detracted from its home-cooked deliciousness. What is the truth when it comes to red meat and cancer? And how do we wade through all this information?

Spurring many of the articles we read today on this topic is from a 2015 study by the International Agency for Research on Cancer (IARC), which stated that if you ate a lot of meat, your chances of getting cancer increased by 18%. The IARC deemed red meat ‘probably carcinogenic to humans based on limited evidence’ and that processed meat is ‘carcinogenic to humans based on sufficient evidence’. Colorectal cancer was the most noted type, but they indicated that processed meat also triggers pancreatic and prostate cancers.

The Global Burden of Disease Project, funded by the World Health Organization (WHO), is cited in the IARC report stating that 34,000 deaths per year are attributable to diets high in processed meat and 50,000 to red meat. Compared with 1,000,000 deaths due to tobacco; 600,000 to alcohol; and 200,000 to air pollution, it’s hard to determine the urgency of the situation.

First, let’s put this in perspective. The average person whose diet includes red meat, fish, chicken and other protein sources has a 1% chance of getting pancreatic cancer, 4% chance of colorectal cancer, and 9% of prostate cancer. If you eat a diet high in red and processed meats, the IARC reports that your chances of getting these cancers would increase by 18%. While it is still not great, it brings the risk to 1.2%, 5%, and 11%, respectively.

How did the IARC come to this conclusion? It is a bit of a mystery. The America Institute for Cancer Research does not know, either:

“It’s not yet clear exactly why these meats increase risk for colorectal cancer. It may be the added nitrites and nitrates, the smoking and/or high temperatures used in some processing, or the heme iron in red meat.”

We first need to distinguish processed meat, such as hot dogs and bacon, from non-processed meat like flank steak or tenderloin. Each one digests differently and thus has different effects on the body.

The culprits are nitrates and nitrites – both are found in red meat and both are compounds with nitrogen and oxygen structures. Nitrates are found in the soil and help plants absorb nitrogen, which is essential for plant growth. Interestingly, vegetables are the biggest source of nitrates in the human diet, accounting for at least 85% of our nitrate consumption. Compare this to processed meats that account for only about 6% of nitrate consumption.

Wait…if vegetables are good for us, then how are nitrates harmful in processed meats? The conversion happens when the bacteria in your mouth and enzymes in your body convert nitrates into nitrites, which has one less oxygen atom. Although this seems like a very small difference, it can lead to completely different effects.

That one less oxygen atom turns nitrates into nitric oxide, which is essential for our bodies. But nitrites turn into nitrosamines in our bodies, which can be harmful. There are many kinds of nitrosamines, and some of them can increase cancer risk. For example, nitrosamines are some of the main carcinogens in tobacco. But can these cancerous types be formed in our food, and if so, how?

The reason we eat red meat, besides its taste, is that it’s full of amino acids – in other words, protein. But when there is exposure to high heat through cooking, the amino acids combine with the nitrites and create the perfect condition for nitrosamines to form.

“It’s not so much nitrates/nitrites per se [that are carcinogenic], but the way they are cooked and their local environment that is an important factor”, says Kate Allen, Executive Director of Science and Public Affairs at the World Cancer Research Fund. She says that we need to consider how we are cooking these meats because that could manipulate their carcinogenic properties. “Nitrites in processed meats are in close proximity with proteins, specifically amino acids. When cooked at high temperatures, this allows them to form nitrosamines more easily, the cancer-causing compound.” 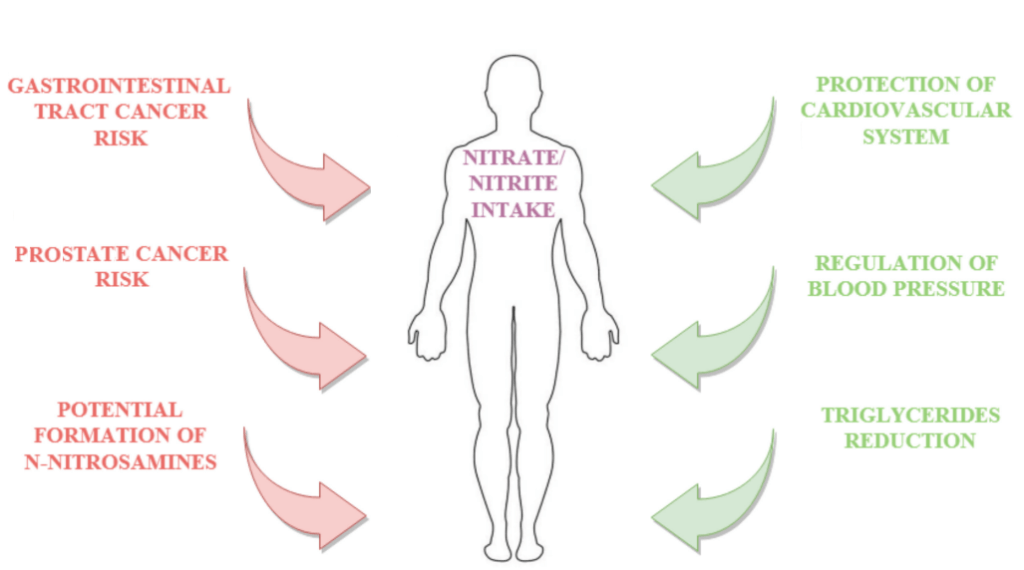 This could be why we don’t see these same carcinogens in vegetables, even though they also contain both nitrates and nitrites. Vegetables are undeniably good for us, and are typically not cooked at the same high temperatures or for as long as meat is, making nitrosamines less likely to form. Plus, vegetables do not contain the same amount of amino acids, making the formation of nitrosamines less likely to occur.

However, nitrosamines are not inherently carcinogenic. There needs to be enough of a chemical reaction to induce a mutation in DNA. Cancer ultimately forms from DNA mutations, including those caused by nitrosamines, which is why red meat is considered potentially harmful by some. But how your DNA reacts to meat also has to do with your epigenetics, which is affected by your sleep, your overall diet, and your exercise.

In addition to nitrosamines, other compounds are up for debate regarding their cancer-causing effects. Substances called heterocyclic amines form when meats are cooked at high temperatures and become blackened or charred. In animal studies, heterocyclic amines are carcinogenic. But what about human studies?

In Pursuit of a Valid Study

To complicate matters further, there is considerable disagreement about the various meta-analyses reporting on the relationship between meat consumption and cancer. Last fall, the Annals of Internal Medicine stated that “the dietary guidelines recommending limited red and processed meat was based on unclear evidence”. Harvard School of Public Health countered with a disagreement on how the Annals of Internal Medicine conducted the meta-analyses. They mentioned that the studies can be cherry-picked to obtain the desired result:

At D2D, we did not conduct our own meta-analysis…we just want to apply some common sense here. So, perhaps between these two studies, we can find a solution that works for most of us.

The variables associated with each human are tremendous. We know that smoking increases your chance of getting cancer and damages almost all the organs in your body. All a study must do is compare smokers with non-smokers to see the effects on one’s body.

But separating out one specific food and studying its effects on the human body is almost impossible. The only way would be to put two separate groups in the exact same living conditions. They would have to follow the exact protocol with exercise, stress levels, living conditions, family life, and diet and then give one red and processed meat and none to the other group. Since cancer takes years to develop, the isolation would have to be for at least 20 years. Honestly, this does not sound very feasible.

The IARC deemed the link between red meat and cancer as having limited evidence so they understood that “other explanations for the observations (chance, bias, or confounding) could not be ruled out.”

So, what is the answer?

The two leading causes of death are heart disease and cancer. It is well understood that the leading cause of these diseases is diet. We have written extensively about the importance of diet, exercise, sleep, and stress management to maintain a healthy life. At this point, we are aware that eating a diet low in saturated fat, trans fats, sodium, and sugar improves our overall health. Furthermore, including 5-7 servings of fruits and vegetables, whole grains, fish, and nuts every day will make a considerable difference in your life.

Red meat includes important nutrients. A lean piece of red meat has protein, niacin, vitamin B6, B12, phosphorus, zinc, iron, and vitamin D and must be consumed as part of a balanced diet to reap its benefits.

Like everything we discuss at D2D, eat in moderation. Will bacon on a Sunday morning and a hot dog at a baseball game give you cancer? No. Would you really want to eat bacon and hot dogs every single day? Probably not. Would you eat a steak every day? Not if you are eating a diet with lots of variety.

While the conclusion of various studies differ in whether meat causes cancer, the fact is that we have a small degree of risk for everything. To avoid increasing that risk, be sure your diet includes lots of fruits, veggies, whole grains, and various sources of protein. Like everything in life, if you overdo any one thing – you’ll get into trouble.

Lucy M. Stitzer is a regular contributor to Dirt to Dinner, covering sustainable farming and biotechnology. She served on the board of directors at Cargill inc. for many years.

This article was originally published at Dirt to Dinner and has been republished here with permission. Follow Dirt To Dinner on Twitter @Dirt_To_Dinner.