This article or excerpt is included in the GLP’s daily curated selection of ideologically diverse news, opinion and analysis of biotechnology innovation.
Though a ban on maize imports could accelerate Nigeria’s adoption of genetically modified (GM) TELA maize, it may be two years before the insect-resistant variety is approved, creating severe hardships for the country’s poultry industry in the meantime.

Confined field trials of TELA maize, which offers resistance to drought and certain insect pests, are currently underway in Nigeria. Scientists are optimistic that the tests will ultimately result in the improved seed becoming available to maize farmers around the country, increasing yields and providing climate resilience in drought-prone areas.

“The TELA maize project has brought new and sustainable innovation to the management of the biotic and abiotic constraints to the production and productivity of maize,” said Prof. Rabiu Adamu, principal investigator of the project at the Institute for Agricultural Research (IAR) in Samaru, Zaria. “Nigerian maize farmers should expect in the next two years, high-yielding, stem borer-, fall armyworm- and drought-resistant maize hybrids in the Nigerian markets.”

But in the meantime, the nation’s poultry industry seems to be the worst hit as it struggles to source maize to feed its livestock in the face of the import ban.

“The policy that banned maize importation has completely and negatively affected the poultry industry worse than anybody expected… this took most of the poultry farmers unawares…most of the poultry farms are closing down now because they cannot afford to feed their birds,” lamented Mr Onallo Akpa, the director-general of the Poultry Association of Nigeria (PAN), during a webinar on the ban’s impact.

Apart from Nigeria’s poultry industry, the common masses on the street are also feeling the pinch of the ban. Speaking exclusively to our correspondent, Hannatu Sanni, a small-time corn hawker, said hawkers now find it difficult to buy corn to sell on the streets because it has become scarce.

Rationale for the ban

In the wake of the COVID-19 pandemic, the Nigerian government revised its foreign exchange (forex) policy to ban maize importers from accessing forex through the Central Bank of Nigeria (CBN).

The policy was received with mixed feelings, as a cross-section of Nigerians believe it was ill-timed. But the government explained the move was made in a bid to increase local production and stimulate a rapid economic recovery.

Dr. Ozoemena Nnaji, the CBN official who signed the circular conveying the government’s decision, said the move was intended to safeguard rural livelihoods and increase jobs lost to the ongoing COVID-19 pandemic.

According to Nnaji, the bank believes smallholder farmers can meet the nation’s demand for maize if given enough support and the right conditions to succeed by the government.

However, maize farmers are facing serious production challenges due to numerous insect pests, including stem and ear borers, root worms, beetles and most recently, the fall armyworm (FAW).

How TELA maize can help

Nigeria awoke to a nightmare in 2017 as farmers watched helplessly as the FAW invaded the nation and devasted maize fields in the country’s five corn growing zones. With over US$268 million lost from the 7.8 million hectares of farmland damaged by the pest, as reported by the United Nations Food and Agriculture Organization (FAO), the government called for an emergency meeting with agricultural commissioners from all the states in the country. Though the pest infestation was later contained, it still remains a viable threat to maize farming in the country. 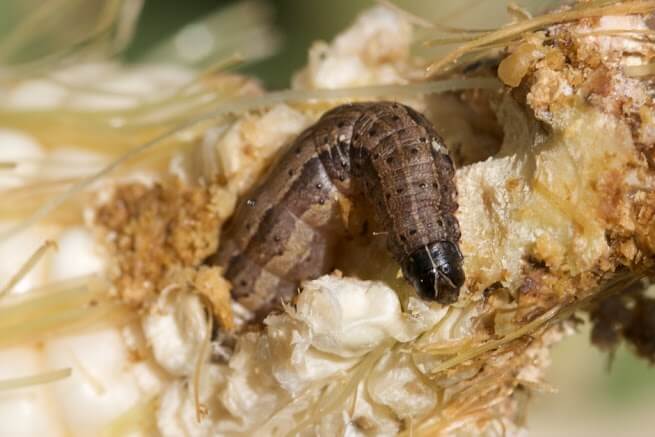 The government and stakeholders are always looking for solutions to the constant challenges associated with maize farming in the country, which resulted in Nigeria enlisting as one of seven African countries participating in the TELA maize project. The project is being carried out by the African Agricultural Technology Foundation (AATF) in partnership with the IAR in Samaru, Zaria.

Preliminary results from the confined field trials (CFT) are very promising, according to a statement released by Alex Abutu, AATF’s communications officer in charge of West and Central Africa. Initial findings indicated that the GM TELA varieties gave over two tons yield advantage under stem borer and fall army worm infestation, compared to the best varieties currently being grown by Nigeria’s farmers.

“These promising preliminary findings from the first phase of the trials have shown that maize farmers in the country stand to benefit immensely when the maize is commercialized as the varieties will save farmers production costs up to hundreds of millions of naira from pesticide applications to control stem borer and the fall armyworm,” Abutu said.

His statement pointed out that the CFTs are being repeated for the second season to confirm the performance in compliance with Nigeria’s biosafety regulations. If the National Biosafety Management Agency (NBMA) approves, the varieties will be evaluated in multiple locations starting in 2021, with farmers participating in the selection of the preferred TELA maize varieties.

Dr. Issoufou Kollo, the AATF regional director, told the Alliance for Science that the TELA maize project holds a lot of potential for the nation, in terms of developing seeds resistant to pests and drought.

However, he cautioned that the long-term project — which has the capacity to help the federal government achieve its dream of making the nation self-sufficient in maize production — must go hand-in-hand with good agronomic practices in order to be successful.

“It is very possible for the nation to be self-sufficient in maize,” Kollo said. “We have land and water and oil to make fertilizers. Projects like TELA maize that are resistant to insect borers and fall armyworm can boost our production a lot. But they cannot do this single-handedly by themselves. They still need good soil management, agronomic practices and fertilizer. It is like a system; you take one unit out and the system breaks down. So, you need good varieties like the TELA varieties, but you also need good agronomic practices to go with it.”

Nkechi is a deputy editor with Leadership Newspaper, a national publication headquartered in Abuja, Nigeria. She frequently covers biotechnology and biosafety issues. Follow her on Twitter @enkaybc

This article ran at Cornell Alliance for Science and has been republished here with permission. Follow the Alliance for Science on Twitter @ScienceAlly
The GLP Needs Your Help
It is easier than ever for advocacy groups to spread disinformation on pressing science issues, such as the ongoing coronavirus pandemic. No, vaccines are not harmful. Yes, the use of biotechnology, GMOs or gene editing to develop antigens for treatments including vaccines are part of the solution. To inform the public about what’s really going on, we present the facts and challenge those who don't. We can’t do this work without your help. Please support us – a donation of as little as $10 a month helps support our vital myth-busting efforts.
DONATE
Share via