This article or excerpt is included in the GLP’s daily curated selection of ideologically diverse news, opinion and analysis of biotechnology innovation.
Norman Ernest Borlaug [who died in 2009] was an American agronomist and humanitarian born in Iowa in 1914. After receiving a PhD from the University of Minnesota in 1944, Borlaug moved to Mexico to work on agricultural development for the Rockefeller Foundation. Although Borlaug’s taskforce was initiated to teach Mexican farmers methods to increase food productivity, he quickly became obsessed with developing better (i.e., higher-yielding and pest-and-climate resistant) crops.

As Johan Norberg notes in his 2016 book Progress:

After thousands of crossing of wheat, Borlaug managed to come up with a high-yield hybrid that was parasite resistant and wasn’t sensitive to daylight hours, so it could be grown in varying climates. Importantly it was a dwarf variety, since tall wheat expended a lot of energy growing inedible stalks and collapsed when it grew too quickly. The new wheat was quickly introduced all over Mexico.

In fact, by 1963, 95 percent of Mexico’s wheat was Borlaug’s variety and Mexico’s wheat harvest grew six times larger than it had been when he first set foot in the country nineteen years earlier.

Norberg continues, “in 1963, Borlaug moved on to India and Pakistan, just as it found itself facing the threat of massive starvation. Immediately, he ordered thirty-five trucks of high-yield seeds to be driven from Mexico to Los Angeles, in order to ship them from there.” Unfortunately, Borlaug’s convoy faced problems from the start; it was held up by Mexican police, blocked at the US border due to a ban on seed imports, and was then stalled by race-riots that obstructed the LA harbor.

Eventually Borlaug’s shipment began its voyage to India, but it was far from plain sailing. 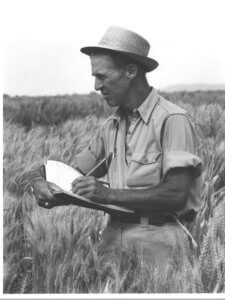 Before the seeds had reached the sub-continent, Indian state monopolies began lobbying against Borlaug’s shipment and then, once it was
ashore, it was discovered that half the seeds had been killed due to over-fumigation at customs. If that wasn’t enough, Borlaug learnt that the Indian government was planning to refuse fertilizer imports as they “wanted to build up their domestic fertilizer industry.” Luckily that policy was abandoned once Borlaug famously shouted at India’s deputy Prime Minister.

Borlaug later noted, “I went to bed thinking the problem was at last solved and woke up to the news that war had broken out between India and Pakistan.” Amid the war, Borlaug and his team continued to work tirelessly planting seeds. Often the fields were within sight of artillery flashes.

Despite the late planting, yields in India rose by seventy percent in 1965. The proven success of his harvests coupled with the fear of wartime starvation, meant that Borlaug got the go-ahead from the Pakistani and Indian governments to roll out his program on a larger scale. The following harvest was even more bountiful and wartime famine was averted.

Both nations praised Borlaug immensely. The Pakistani Agriculture Minister took to the radio applauding the new crop varieties, while the Indian Agriculture Minister went as far as to plough his cricket pitch with Borlaug’s wheat. After a huge shipment of seed in 1968, the harvest in both countries boomed. It is recorded that there were not enough people, carts, trucks, or storage facilities to cope with the bountiful crop.

This extraordinary transformation of Asian agriculture in the 1960s and 1970s almost banished famine from the entire continent. By 1974, wheat harvests had tripled in India and, for the first time, the sub-continent became a net exporter of the crop. Norberg notes, “today they (India and Pakistan) produce seven times more wheat than they did in 1965. Despite a rapidly growing population, both countries are much better fed than they used to be.”

Borlaug’s wheat, and the dwarf rice varieties that followed, are credited for ushering in the Green Revolution. After the Indo-Pakistani war, Borlaug spent years working in China and later in life, Africa.

In 1970, Borlaug was awarded the Nobel Peace Prize for his accomplishments. He is only one of seven to have received the Congressional Gold Medal and the Presidential Medal of Freedom, in addition to the Nobel Peace Prize. It is said that he was particularly satisfied when the people of Sonora, Mexico, where he did some of his first experiments, named a street after him.

Norman Borlaug’s work undeniably changed the world for the better, and in saving approximately one billion lives, he truly deserves to be our first Hero of Progress.

Alexander C. R. Hammond is a research associate at the Cato Institute’s Center for Global Liberty and Prosperity and a senior fellow at African Liberty. Follow him on Twitter @AlexanderHammo

This article originally ran at Human Progress as Heroes of Progress, Pt. 1: Norman Borlaug and has been republished here with permission.

This article originally appeared on GLP on July 19, 2019.