This article or excerpt is included in the GLP’s daily curated selection of ideologically diverse news, opinion and analysis of biotechnology innovation.
Climate change and agriculture appear joined at the hip. Agriculture—through methane, carbon dioxide, and land use—has had an impact on the global climate. And climate change—through drought, heat, and pests—will have an impact on agriculture, reducing yields and making farming more difficult.

But is there one type of agriculture—conventional, organic, “agroecological,” or with the use of genetic engineering—that’s more sustainable? Considering that all agriculture involves land use changes and other environmental alterations that lead to climate change, the answer is—yes, but with caveats.

Editor’s note: This is part one of a two-part series on climate change and agriculture. Read part two here: Agriculture and climate change: Taking the best of all farming systems could tip the carbon scale in the right direction

The Intergovernmental Panel on Climate Change (IPCC) has reported that between 1850 and today, “Human-induced warming reached approximately 1°C (likely between 0.8°C and 1.2°C) above pre-industrial levels in 2017, increasing at 0.2°C (likely between 0.1°C and 0.3°C) per decade.” The IPCC recommends that further increases be held so that the earth’s overall temperature increases to no more than 1.5° C. However, climate scientists (including the IPCC) estimate that under current industrial (and agricultural) activity, global temperatures could rise between 1.5° and 5.5° C over the next 50 to 75 years. The Paris Agreement has a goal of keeping the temperature rise between 1.5° and 2.0° C. 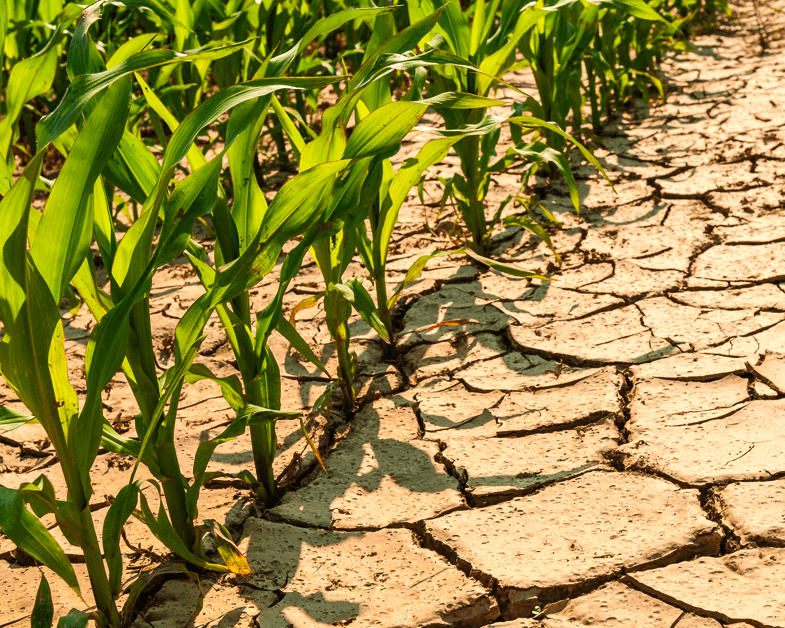 In the US, the federal Department of Agriculture predicts that, in turn, climate change will have an overall deleterious impact on crops and livestock. According to the USDA’s Fourth Annual Climate Assessment:

While some regions (such as the Northern Great Plains) may see conditions conducive to expanded or alternative crop productivity over the next few decades, overall, yields from major U.S. crops are expected to decline as a consequence of increases in temperatures and possibly changes in water availability, soil erosion, and disease and pest outbreaks.

For small-scale farmers in developing countries, the effects of rising temperatures look worse. “Extreme weather events such as droughts, heat waves and flooding have far-reaching implications for food security and poverty reduction, especially in rural communities with high populations of small-scale producers who are highly dependent on rain-fed agriculture,” wrote an international team from Cornell University, CIMMYT in Mexico, the USDA and the World Bank. “Climate change is expected to reduce yields of staple crops by up to 30% due to lower productivity and crop failure.”

Moreover, the Paris goal of 1.5- to 2.0-degree temperature rise may be impossible without changes in food supplies, including agriculture. An Oxford University-led study published in Science stated that major changes in the “food system” will be necessary—the main components they identify as part of this system are:

So, what’s a poor farmer to do? Or even a rich one?

Obviously, it’s necessary to modify production and farming management to mitigate the contribution of greenhouse gases. These modifications may include, as the Cornell-led team wrote:

There are three basic ways farmers can achieve these, and politics has started to make them mutually exclusive: organic, conventional (with genetic engineering), and conventional (without GMOs). Another category, “agroecology,” is either a real, science-based approach or “fightin’ word,” depending on whom you ask.

Related article:  Plight of the monarch: Threatened by more than the loss of milkweed food supply
Follow the latest news and policy debates on agricultural biotech and biomedicine? Subscribe to our newsletter.
SIGN UP

A recent paper in Nature Communications by a German team claimed that, once its products are priced correctly, organic methods are just as sustainable (in terms of reducing greenhouse gas emissions) as conventional farming, particularly when discussing livestock. Animal products, the authors noted, produced the highest “external” greenhouse gas costs, both for organic and conventional methods, and the lowest costs were organic plant-based products. So, is organic better for GHG overall? The paper implies “yes.”

But other scientists say, “Except for animals, probably not.”

The Nature paper, along with other non-academic initiatives such as the European Union’s “Farm to Fork” and “Green” efforts, which are supportive of organic over conventional (and GMO) for reducing greenhouse gas emissions, ignore several key elements of GHG emission:

But some more scientifically tested aspects of agro-ecology (or, as some call it, “regenerative ag”) could help blunt the production of GHGs—reduced tilling, cover crops, rotation of crops and targeted planting of perennials.

Just how much can any new techniques—genetic engineering and editing, conventional farming, and even agroecology–improve agriculture’s carbon footprint? We’ll cover that in Part 2.

Andrew Porterfield is a writer, editor and communications consultant for academic institutions, companies and non-profits in the life sciences. He is based in Camarillo, California. Follow Andrew on Twitter @AMPorterfield