It’s a five–hour drive into the western part of Uganda to Kachwekano Zonal Agricultural Research and Development Institute (KaZARDI), where GM Irish potatoes are being bred. Visitors are welcomed by healthy looking plants, the centerpiece of the country’s ongoing potato field trial.

The group of farmers engaged in potato farming and seed production came for a tour at the institute. KaZARDI director Alex Barekye explained to the farmers that the plants are still being researched and are likely to be released next year, but only if the government gives it a green light.

Some of the visiting farmers interrupted him, at times demanding more immediate availability of the genetically-engineered potato seed. Charles Byarugaba, a commercial potato farmer and leader of potato seed multiplication famers in Kabale, Uganda, challenged the scientists.

“We want the GMO potato seed right away,” he said. “You can go ahead to follow those legal procedures but it must not affect us farmers because we are in need of varieties resistant to potato blight.” His fellow farmers said that if they are not given the resistant seeds, there will be no option but to acquire them illegally.

Unfortunately, the politics of farming in Uganda, particularly when it comes to advanced biotechnology, has all but scuttled the implementation of cutting edge technologies. The country’s farmers face daunting challenges.

“Our crops are facing extinction and there are no known ways of effectively dealing with the new pests and diseases other than the use of biotechnology,” Dr Wilberforce Tushemeirwe, a prominent scientist, has said. Food crops such as cassava, bananas and sweet potatoes  face extinction due to incurable crop diseases. Maize is under attack by the fall army worm. Cotton which is a cash crop has proven difficult to grow in Uganda because of the cotton bollworm pest infestation, which GM technology contains in many other countries.

The Genetic Engineering Regulatory law, formerly referred to as the National Biotechnology and Biosafety bill has twice come close to being signed into law.  It would allow for regulated production and use of genetically modified crops in the country, and would pave the way to biotech solutions in use in dozens of other countries, including in other African countries.

However, anti GM groups have been working to ensure the GERA law is not passed. Speaker of Parliament Rebbeca Kadaga supported the law and has on two occasions tried to form a quorum of members of Parliament but to date no action has been taken.

Irish potato a food and commercial crop in Uganda

The latest crop under siege is the Irish potato, a food security crop and is grown in the highland areas of southwestern Uganda in Kabale and Kisoro. For communities in this part of the country, it is considered staple food and a primary source of income.

The country relies on supplies of potato from farmers in the southwest, who contribute 60% of supply, and those in the Eastern highlands of Uganda, who contribute the other 40%. As a result of increased demand from urban areas, production has intensified and is spreading into other areas of Uganda.

The economic value of potatoes

Currently, 300,000 metric tons of potato are produced each year in Uganda, where farmers earn market prices ranging between 33-50 cents per kilogram or USD $1,500 -2,000 per hectare, depending on the season.

The Irish potato is growing in popularity, with great potential for income generation and improving nutrition. The Ugandan government has declared it a key crop for the country. Farmers grow potatoes at about 1,800 meters above sea level in areas that border with Rwanda and Congo, as well as the eastern part of the country around Mt. Elgon. Farmers currently average seven metric tons per hectare, but with improved varieties and best farming practices, they could produce up to 40 metric tons per hectare.

“From my perspective, I see potatoes changing lives of farmers in Uganda who specialize in growing the crop and with the profits obtained, farmers can afford to build new homes. They use potato as a food security crop for their families. Nationally, potato has played significant role in feeding rising urban populations. The market is also growing,” Barekye noted.

Abel Arinatwe, a potato breeder at KaZARDI, said that agricultural scientists in the country started breeding local varieties in the 1970s. These varieties include Rutuku and Victoria, and have been widely adopted. 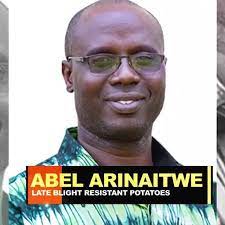 Although in 1997 scientists at the National Agricultural Research Organisation bred and released an improved Victoria variety which was resistant to pests, in early 2004 farmers began experiencing massive challenges of late blight destroying potatoes in all fields in the country.

GM breeding work started in 2012 in collaboration with the International Potato Center (CIP) in Lima, Peru. More than 10 experiments have been conducted since then to prove genes actually do provide complete resistance to late blight. According to Arinaitwe, KaZARDI has been developing a new version of the Victoria variety by adding three resistance genes (3R) obtained from wild potato varieties acquired from the CIP:

The process that we used to develop the bioengineered potatoes is genetic engineering in which three genes from wild relative varieties Solanum venturi and Solanum balbocastanum known to offer resistance were identified, cloned and transferred in to the local variety Victoria using agrobacterium mediated transformation protocols in laboratory. This was followed by rigorous tests in the lab, green houses and in the field to confirm that the gene transferred were able to provide protection.

Victoria plants were left to grow for nine weeks and those with 3R genes showed 100% resistance to late blight and those without were wiped out. Upon completion of their growth period in 18 weeks, the harvested tubers were completely healthy. Unlike the conventional variety with the highest yield potential of 20 tons per hectare, the GMO variety yields up to 35 – 40 tons per hectare, depending on farming practices.

Since delays in passing Uganda’s GERA law affects when the new GM potato might be released,  the US Agency for International Development (USAID), in its “feed the future” project, is currently collaborating with NARO to involve the private sector to develop the product.

Simon Byabagambi, program management specialist at USAID in Kampala, said that “No obstacle must stop a technology to be adopted in a country such as Uganda. My team is engaging the private sector companies dealing in processed food to start processing and packaging GMO potato products. This can be in form of crisps and packaged flour for baking and making porridge for breastfeeding children. The supermarkets are filled with imported processed GMO foods which people are purchasing and consuming, why not our own products.” He contends that a few selected farmers can team up with the scientists to grow GM potato which can be supplied to food processors.

What are the deliverables for the GMO potato

Barekye noted that resistance to the same blight that introduced the Irish potato famine could prevent the same famine from Africa:

Resistance to late blight in the field marks an important milestone in the development of biotech potato varieties to farmers in Africa that will reduce losses and cost of production significantly. Late blight disease is well-known for its devastating impact on potato farms worldwide. In the 1840s it caused the Irish famine leading to 1.5 million deaths in Ireland and likely more deaths on the European continent. Since then, this disease has been responsible for production losses and high cost of fungicides used by farmers almost everywhere where the crop is grown which is costly to farmers in Africa.

The GM seeds have taken on an intensified urgency as concerns about climate change have increased. Barekye noted the myriad ways scientists in Africa have recognized the severe impact climate change is having on Irish potato production:

Scientists have been collecting wild varieties of Irish potato, which yielded 39 species from six nations: Peru, Brazil, Ecuador, Guatemala, Costa Rica and Chile. This collection will help breed new varieties across the continent and elsewhere. Uganda’s GM potato breeding technology is now being adopted where permitted — in Kenya, Ethiopia, Egypt and South Africa.

While wild type varieties are valuable for selecting breeds that can withstand the current climate and environmental conditions in Uganda, genetic modifications can bring many more traits to potatoes, in time for farmers to reap their benefits. The barriers to introducing these disease-fighting seeds are no longer technological; they are entirely political.

Lominda Afedraru is a freelance science journalist in Uganda who specializes in agriculture, health, environment, climate change and marine science. Follow her on the Daily Monitor, Facebook or Twitter @lominda25