A burning issue in the world today is climate change. Across Africa, the effects are complex. They range from the Sahara – world’s largest desert  – to famines caused by warming oceans to islands across Western Africa’s coasts at risk of being submerged as a result of rising sea levels or vast swathes of lands being encroached by desertification in Southern Africa. Some effects of this human and environmental catastrophe include but not limited to the privation of most countries on the continent, low levels of adaptive capacity, excessive dependence on the ecosystems thereby leaving them susceptible to aftermaths of climate change.

Businesses, corporate leaders, philanthropists, governments and civil groups have raced to find solutions to climate change as the effects rage on especially amidst a global pandemic which has divided attention and resources.

Although most discussions about reducing GHG emissions have been about electrification and transportation, another sector  is agriculture (forestry and land use) – responsible for 24% of all GHG emissions.

There have been various solutions aimed at reducing carbon emissions in the wider agriculture industry. These include:

These and many strategies by consumers and organisations are aimed at reducing carbon emissions from animal sources. A 2016 study by the OECD showed that an average American consumes 215 pounds of meat (includes pork, beef and poultry). Cutting back on this by a quarter according to Richard Waite, a senior associate at the World Resource Institute, will free up about 23 million acres of land of arable land, roughly the size of Indiana.

Africa, however, is excluded from such surveys and discourse even though the continent is projected to have 1.7 billion inhabitants in 2030, less than nine years’ time, and more than 4 billion by 2100.

Due to this astronomical growth, the continent will have the world’s youngest population by 2100. These humans will eat meat regardless of the impact it has on climate change, and for many of the right reasons. People need proteins to maintain health and meat is an easy source that poor countries simply can-and could-not afford. Moreover, more than a quarter of the world’s hungriest live on the continent—thus, more than eight million children suffer from the effects of acute malnutrition across Sub-Saharan Africa. Thus, nutritional content consumed by the average African is the world’s lowest, although as the population rises, so will its consumption. 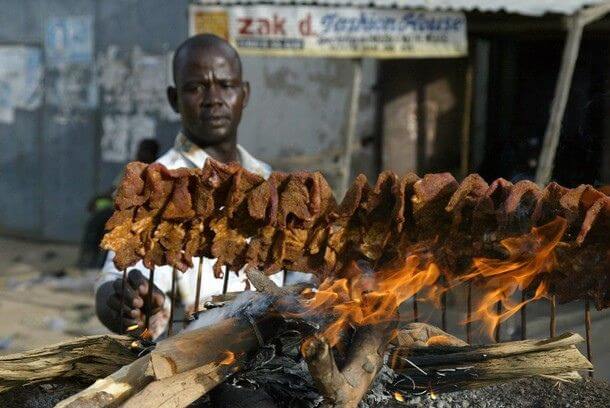 Africa, specifically Sub-Saharan Africa, is home to the largest number of poor people globally mostly in the most populous country – Nigeria, often described as the world’s poverty capital. As its population increases, economy expands and inhabitants become prosperous, they will crave for more beef (includes chicken, lamb, mutton, chevon etc.) and its derivatives. Moreover, due to high unemployment and poverty rates coupled with nutritional benefits of meat and acute malnutrition on the continent, most Africans cannot afford to let go of consumption. Already, Africa imports more meat than China, even though most of the continent’s meat is home-grown. Expecting these people, most of whom have not eaten adequate quantities of meat – a protein – to let go or reduce its consumption as a means to fight GHGs emissions reeks of moral arrogance.

Industrialisation leads to a more prosperous society, reduction of poverty and unemployment rates, this is a phenomenon that Sub-Saharan Africa has not experienced as it is home to the highest number of less industrialised countries globally. This has led to high unemployment and poverty rates, the highest globally. Animal husbandry is a source of employment and revenues for many people and governments in Africa. Reduced consumption of meat and its ideological propagation by richer countries are bound to affect the beef and dairy industries in say Namibia and South Africa respectively.

African farmers are working on raising meat sustainably via improved breeding techniques. This no small undertaking, as 300 million cattle are currently raised in Africa, totaling 20 percent of the world’s beef livestock. However, the efforts are a work in progress as the continent grapples with lack of expertise and a young history in the organised meat production industry. A recent review noted the challenge of “defining realistic breeding objectives and securing the involvement of stakeholders. All the strategies reviewed here have been funded externally within development or research projects that are often too short to yield tangible genetic improvement.” Additionally, notwithstanding its novelty within the continent, lab-based meat is being produced by entrepreneurs on the continent.

Although Africa will be severely affected by climate change across many sub-regions, Africans are not responsible for it.  Africans should not be saddled with the responsibility of partaking in certain solutions. The truth is that Africans need to consume meat like other citizens of the rich world as a source of protein and employment. Africa’s population is increasing astronomically and so will its incomes, urbanisation and living standards. It is pragmatism, not moral arrogance and hypocrisies that will ensure Africa handle meat consumption and fulfil its climate change obligations.

Uchechi Moses is an aspiring plant scientist based in Akwa Ibom State in Nigeria. He holds a BSc in genetics and biotechnology and writes about how capitalism and science can provide food security and prosperity for the next generation of Africans. Follow him on Twitter @Uchechi59