Can consumers trust voluntary labels such as “non GMO”? Apparently not, writes Consumer Reports, at least in the case of a popular junk food brand, Xochitl, that targets the high-priced ‘natural’ foods market.

The magazine tested Xochitl Topos de Maiz corn chips labeled as “No GMO” on the front of the bags, finding genetically engineered (GE) corn, averaging 75 percent in each of six bags. It also tested a different Xochitl product labeled “organic” and found they contain no GMOs. (No organic food can legally be made with GMOs but crops that are non-GMO are not automatically organic, as certified organic products must be produced following strict guidelines). Here is what CR wrote: 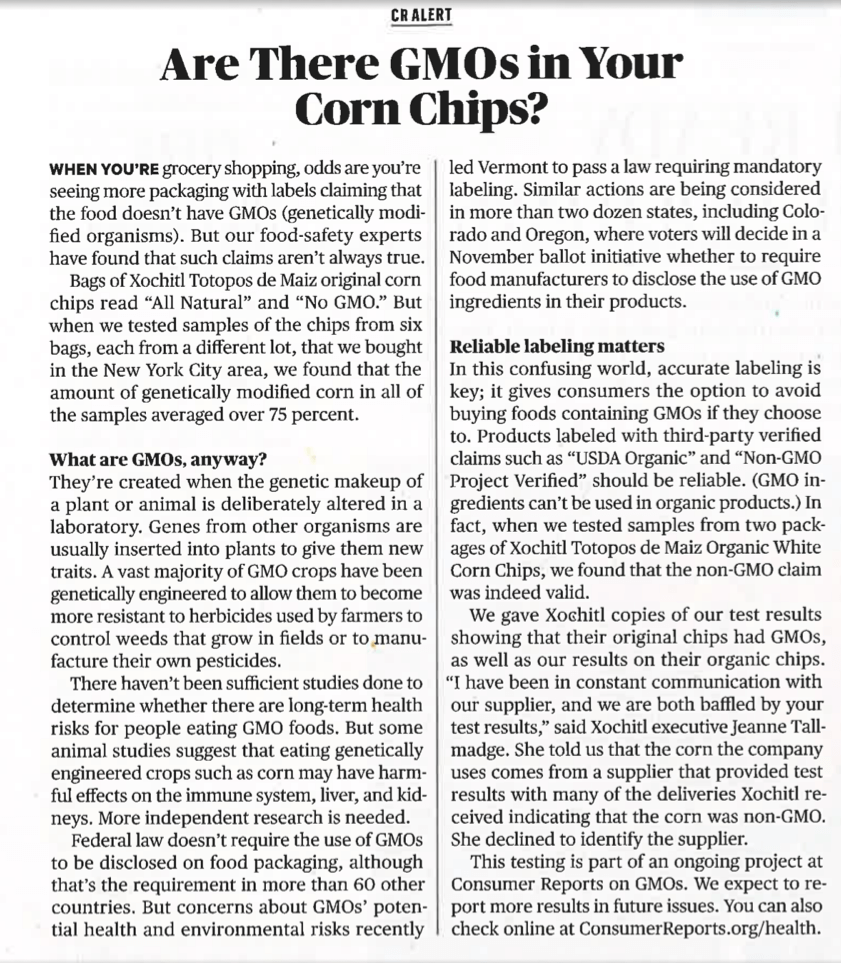 The mislabeling alert is of value to those consumers who are more concerned that they are eating chips made from GE corn than they are worried about eating junk food. But CR does nothing to dampen that hysteria surrounding GMOs and in fact goes off the science rails by frightening consumers about GMO safety:

There haven’t been sufficient studies done to determine whether there are long term health risks for people consuming GMO foods. But some animal studies suggest that eating genetically engineered crops such as corn may have effects on the immune system, kidneys and liver. More research is needed.

This is just wrong. There have been plenty of long term term studies on the health effects of GE crops. As GLP’s Jon Entine noted in his recent talk to the National Academy of Sciences, an updated review published last December of 33 studies—17 long-term and 16 multigenerational (from two to five generations)—by a team of scientists including Chelsea Snell and Agnès Ricroch found, “Results…do not suggest any health hazards…and there were no statistically significant differences within parameters observed. …The studies reviewed present evidence to show that GM plants are nutritionally equivalent to their non-GM counterparts and can be safely used in food and feed,” the researchers added.

A separate study released in early September looked at massive amounts of data on the health of livestock fed GE crops over almost two decades:

What did they find? That GM feed is safe and nutritionally equivalent to non-GMO feed. There was no indication of any unusual trends in the health of animals over 18 years since 1996 when GMO crops were first harvested.

The animal studies that CR references which supposedly hint at health concerns have all been discredited for poor design and not one has seen its data replicated–a basic hallmark of good science. There really isn’t an scientific basis to believe that food made from GE crops would pose any unusual health issue. There simply isn’t a biological hypothesis to test as to how GE crops might cause harm or pose more risks than conventional crops.

This backhanded attack on GE crops and food is par for the course at Consumer Reports, which has been openly hostile towards the technology and deceptive in its reporting. As we reported at the GLP in August, in an article headlined “Milk Alternatives: Should You Sip or Skip,” Consumer Reports urged its readers to avoid perfectly healthy soy milk for fear that it might have been made using GE soy.  “Look for brands with the USDA organic seal or the non-GMO verified label,” it wrote.

There is not one published study that suggests that GM soy products are any less nutritious than alternatives; nor are they, or any approved GMO food, harmful in any way.

Who is steering this anti-science trend on CR? The key driver is almost certainly Michael Hansen, a senior staff scientist long known as a rogue outlier on the GM issue. Hansen is notorious for hyping the alleged potential dangers of GMOs in contrast with every major independent global science oversight committee in the world. Geneticist Val Giddings has provided a comprehensive analysis of Hansen’s disinformation strategy at state legislatures where he is often asked to speak because of his connection to CR.

Hansen’s director, Jean Halloran, is little better. She long ago embraced the style views of the activist Organic Consumers Association, referring to GM crops as “Frankenfoods,” and claiming that the U.S. food regulatory oversight of GMO safety is a “fraud. CR’s evidence free stance on GE crops undermines its hard won credibility for empirical reporting and venerable reputation.

This gets at something that I think the advocates of mandatory GMO labels miss (at the state level especially). What isn’t taken into account is the incentives for accountability in accurate labeling. Xochitl had “mandated” that the supplier ship them non-GMO corn, but there isn’t necessarily the buy in from the supplier, or the accountability that comes from third party certification. A food manufacturer or supplier that seeks out, commits to and pays for third party certification has a self-selected, highly motivated reason to live up to the label. That label is enforced by an organization committed to the label’s integrity. Why anyone would want to switch to an expensive and inevitably patchwork system of government bureaucrats trying to police businesses that are not committed to labeling, and have in fact been fighting it, is a head scratcher. It’s all the more confusing that people who don’t trust the FDA or USDA on the safety of GE crops want to put them in charge of verifying the presence of GMOs in on supermarket shelves.

Marc Brazeau is a writer and agriculture editor for the Genetic Literacy Project. He blogs at Food and Farm Discussion Lab. Follow Marc on Twitter @realfoodorg