Last week I was alerted by a South Florida farmer that the South Florida Science Center and Aquarium (SFSC) was hosting a “Science on Tap” talk, held at a local bar. The topic was entitled, “GMO’s (sic) Exposed” and was to be delivered by Michelle Parenti Lewis, a local dietitian. I wondered what she might be exposing.

The original story was posted on my blog, Illumination, and summarized at the Genetic Literacy Project. A Google search revealed that the event was being billed to show “dangers in your food”, 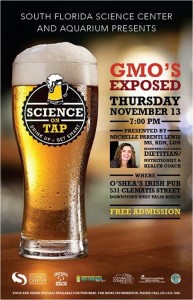 and likely would be an anti-GMO fear fest. Which is fine. Anyone that wants to make crazy claims is welcome to do so, and do it with a bullhorn and on a high mountaintop.

The problem here is that what appears to be a veiled political endorsement of food labeling is being billed as a scientific event. Worse, it is being endorsed by SFSC. Hitching their wagon to a presentation not backed by science is a dangerous place for a scientific venue to go. My blog detailed the problem with a science center sponsoring a political event masquerading as a scientific talk.

Within hours social media carried the story and several folks from the SFSC reached out. They noted how important it was to “hear all sides”, in essence, let someone provide a non-scientific viewpoint because it is important to the debate (that those of us in science know does not exist).   You know, “Teach the Controversy”. Creationists must be salivating.

I recommended it be cancelled until they were sure it was a scientific event. After a few polite exchanges and some good dialog they did not cancel the event, but agreed to change the name. Yes, the SFSC will still allow what likely will be a biased talk that uses fear and uncertainty to promote an agenda to label foods. That’s just my guess from her previous talks and posts.

The science center did reach out and asked me to join, but I’m busy with a visiting speaker in Gainesville and “Science on Tap is four hours away.

Luckily others have been identified to step in. Chris Miller, an outstanding extension agent from Palm Beach County will be in attendance. Chris has seen my recent presentations and he knows farming. While molecular biology and transgenic crops are not his specialty, he’ll keep it real. A number of faculty from the Biotechnology Program at Palm Beach State University will be in attendance also, and they have been excellent communicators of the technology.

The presentation will be posted online, and I’m going to make a prediction here. Her talk will mirror those from Michael Hansen of the Consumer’s Union. She’ll talk about the technology with some accuracy and then key on the vague language that can be twisted to satisfy agenda. Watch for:

My discussion with SFSC has been pleasant and I’m grateful that they’ve attempted some corrective action. Maybe Ms. Parenti-Lewis will nail the science and give an evidence-based presentation on transgenic plant technology, why farmers use it, and a complete coverage of benefits and limitations.   That would be great.

On the other hand, if she uses the credibility of SFSC to make sweeping generalizations to build fear of sound science, it will be a major fail for SFSC. My prediction- they’ve been duped, and are now attached to an Earth and Water Watch surrogate using this opportunity to misrepresent agriculture, twist science, and trivialize a rigorous approval process. She’ll promote a position of denigrating transgenic science and push for food labeling that is not supported by science and reason.

I would love to be proven wrong.

Kevin Folta is professor and chairman of the Horticultural Sciences Department at the University of Florida, Gainesville. Dr. Folta researches the functional genomics of small fruit crops, the plant transformation, the genetic basis of flavors, and studies at photomorphogenesis and flowering. He has also written many publications and edited books, most recently was the 2011 Genetics, Genomics, and Breeding of Berries.