Battle over Biotechnology: Pro and anti GMO scientists square off

Wednesday, December 3, Intelligence Squared will be hosting the first high profile debate among scientists over genetically modified food in years. The event, held in New York City, will be streamed live on the Genetic Literacy Project website beginning at 6:45 PM ET, and viewers can vote which side “won” the debate on the hosting site.

Here is how Intelligence Squared describes the event:

Genetically modified (GM) foods have been around for decades. Created by modifying the DNA of one organism through the introduction of genes from another, they are developed for a number of different reasons—to fight disease, enhance flavor, resist pests, improve nutrition, survive drought—and are mainly found in our food supply in processed foods using corn, soybeans, and sugar beets, and as feed for farm animals. Across the country and around the world, communities are fighting the cultivation of genetically engineered crops. Are they safe? How do they impact the environment? Can they improve food security? Is the world better off with or without GM food?

The two scientist opponents of GM crops and foods are Margaret Mellon, a molecular biologist formerly with the Union of Concerned Scientists, and Charles Benbrook, an organic foods advocate with the Center for Sustaining Agriculture and Natural Resources. Debating on behalf of agricultural biotechnology: Alison van Eenennaam, genomics and biotechnology researcher at the University of California-Davis, and Robert Fraley, microbiologist and biochemist who is also the chief technology officer for Monsanto.

What can we expect? Kevin Folta, head of horticultural sciences at the University of Florida, wonders in his blog post whether those stridently aligned against the technology will stick to the science or play the fear card. He is not optimistic.

My prediction is simple. Benbrook and Mellon will speak of “imprecise, unproven science” that could cause “allergies and other issues”. Margaret used to work for Union of Concerned Scientists, and her recent post showed that she’s the clueless shell she’s always been in this arena. She has no idea what RNAi is, what the new products are, or how they work in practice. Benbrook has a YouTube video where he connects GMO foods to autism and arthritis  where he scares viewers of all of the “unknowns”.

This is what Benbrook and Mellon have. Fear of the Unknown. There is no evidence, none, that these technologies are dangerous. It is fear of the unknown. This is their argument.

To underscore his skepticism, Folta provides the reader with a GMO Bingo card highlighting many of the misleading fear-related claims commonly made by Mellon, Benbrook and dedicated anti-GMO ideologues. “So have fun with the BINGO card,” Folta writes, “and have fun charting that Benbrook and Mellon rely heavily on the argument from ignorance….. “We just don’t know…” 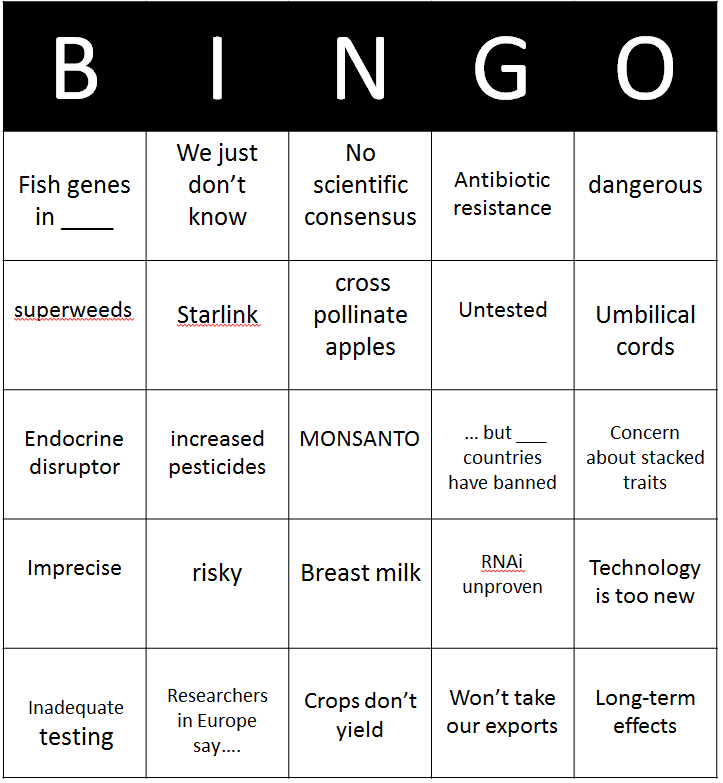