A new wave of genetically engineered crops is dawning but the shadow of a publically divisive debate over GMOs may hamper the technology’s potential. The story of two potatoes illustrates how the technology’s use depends on the understanding of “foreign” genes within the regulatory environment.

J.R. Simplot’s new Innate potato, approved by the USDA in November, and a blight-resistant potato developed in the United Kingdom both challenge anti-GMO activists notion of “foreign genes” in

Frankenfoods. The two potatoes use the same gene pool as conventional breeding but are regulated the same as transgenic technology.

Cis/intragenic approaches have been first attempted on crops that contain widespread clones, such as potatoes, apples, strawberries and grapevines, but has also been attempted on alfalfa, wheat, barley, rye and poplar trees. The Innate potato is the first to be approved for commercialization. More are in the pipeline, including the Arctic apple, which is developed by a small Canadian company using gene silencing—a type of 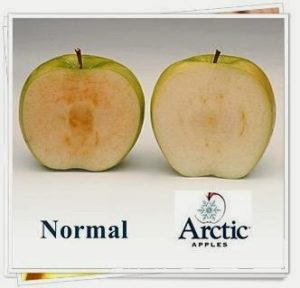 These newer methods differ from transgenic techniques, which anti-GMO activists began calling “Frankenfoods,” to describe the use of “foreign” genes in crop breeding. The term started in 1999 when a Greenpeace activist dressed as “FrankenTony,” a play on the Kellogg’s mascot Tony the Tiger, to protest the company’s use of genetically modified grains. He and his fellow activists called the crops a “monstrous experiment,” and the British press began using the term Frankenfoods.

A whole visual genre of Frankenfood images has cropped up on the Internet. Images of fish with pig heads or cows with chicken heads has filled the imaginations of anti-GMO activists trying to convey ethical concerns to the public. Nancy Dreyfus writing on the Green Divas says, “Think of it as interspecies rape.”

Wow. That sounds quite sinister. It was supposed to.

This colorful spin has led to a legacy of poor public understanding, which is still haunting politics and hampering the fate of crops like the U.K.’s blight-resistant potato. There are a couple of approaches to deal with this.

One approach has been to educate the public. Scientists have done this for years by disputing the Frankenfood myth, explaining that “foreign” genes are a misnomer.

According to Curtis Hannah, a University of Florida molecular biologist and plant geneticist, when genetically modified foods were first introduced in the mid-90s, scientists didn’t completely understand how the genome works. He draws on an article in the journal Plant Cell, which analyzes the corn genome, to explain that we now know that all members of a family do not contain the same genes.

He explained, “DNA naturally moves around the genome and inserts at random into the genome-actually pick up pieces of old genes and put these pieces together to make brand new genes.” Called chimeric genes, these are quite similar to the ones scientists synthesize in the lab and insert into plants.

He concludes that either “new non-GMO or conventional varieties of food crops appearing on the market this year likely contain genes that were not in those same crops the year before.”

More recently, scientists have found that plants do their own genetic engineering of sorts. Genes move from one species to another in nature. In April, scientists presented evidence to the National Academy of Sciences on the natural transfer of a gene from a fern to a hornwort, reported Cosmos. They expect to find more cases of the same thing.

Further, even human genome shares genes from plants and other species. We share genes with species as diverse as zebra fish, mice, and even yeast.

So, while a better understanding of “foreign” genes may change acceptance of biotechnology in crop breeding, some scientists have taken a second approach to the public’s unease over what they understand to be “foreign.” These are the scientists who are bringing us the blight-resistant potato and the Innate potato.

This new approach further bucks the misnomer of Frankenfoods.

This is bolstered by the risk assessment by the European Food Safety Authority (EFSA), which studied both cisgenic and intragenic plants concluding that cisgenesis contains no more hazards than does conventional breeding.

Yet, the fate of the cisgenic blight-resistant potato has thus far meant its rejection in the U.K. causing scientists to license the technology to the American company J. R. Simplot.

To be clear, the EFSA assessment also found that like transgenesis, intragenesis could introduce novel hazards, which may warrant other considerations in regulation.

But, ultimately, it is clear that newer methods and newer knowledge of genomes could change the public discussion and ultimately regulatory considerations, if people are educated about the science.