Scientists engineering synthetic dairy products and most vegans—those who abstain from eating food made from animal products–are on the same page about some things: Reducing harmful emissions from animals, such as methane gas from cows, and preventing the inhumane treatment of animals in large-scale commercial farms should be a priority.

However, many vegans also choose what they view as “natural” foods—there is no clear definition of course what that means–over foods they consider to be processed or use certain chemicals. Burt new food technology is bringing some vegans to a crossroads. Will a new wave of eco-consciously produced dairy-free milk and cheese shake up vegan’s “natural” inclinations or face a marketing flop? 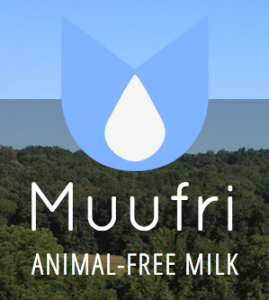 Our solution is to make real milk from the bottom up. It’s a fairly simple mixture: six key proteins for structure and function, eight key fatty acids for flavor and richness. In different ratios, these components give us cow’s milk, goat’s milk, or even buffalo milk – all suitable to become countless products, from toppings to cheeses to desserts.

Using the same principles of biotechnology behind beer or vegetarian rennet, Muufri will make milk that tastes and functions just like animal-produced milk, but without the problems associated with industrial animal facilities.

Created by synthetic biology, the techniques used could face the same fate as the polarizing GMO debate if communication isn’t done with care. Synthetic biology is the next new biotechnology. As NPR reporter Eliza Barclay put it: “GMOs are old hat.” She writes:

While genetically modified seeds typically contain genes from another organism that bestow a plant with a new defense mechanism, making synbio food involves taking genes from a plant and giving them to yeast to make the same compound the plant makes, but much more efficiently, via fermentation. 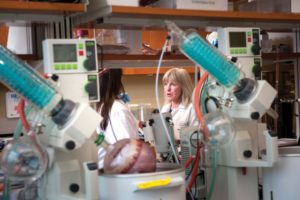 In Muufri milk, for example, the yeast used in the process is genetically modified but it’s not actually used in the final process. Other than synthetic meat and dairy, the Swiss company Evolva has also developed synbio vanilla and synbio saffron. Luc Henry of the Swiss Federal Institute of Technology in Lausanne writes in Discover:

Engineered yeast has a significant advantage over crops or their genetically modified copies. Not only does it not require any land, but also the final products, such as Evolva’s vanillin, are chemically identical to the one isolated from natural sources and do not need to be labelled as “GM.” Finally, microbial factories are contained in reactors, effectively removing the risk of environmental contamination that open-field genetically-modified cultures represent.

But, how will consumers growing increasingly uncomfortable with GMOs respond to synbio? Well for starters, most activists have ignored the fact that genetic engineering is used to make almost all the cheese and beer, using GE rennet made in the world today. But a new product coming into the marketplace might not fare so well, especially because many of the same people that are skeptical about GMOs seem repulsed by the linking of synthetic biology with food.

But there is a small group of technology-embracing vegans in support of GMOs who might provide early cover for the roll out. These pro-GMO vegans see the potential for genetically modified crops and foods to create acceptable alternatives to animal products and also to nutritionally enhance foods with nutrients that may be lacking in a vegan diet. They also believe the lack of appealing vegan alternatives may be hindering others from choosing a vegan lifestyle. They are attempting to reach a wider audience via Facebook. They seem like a target market of potential early adapters in the vegan community to synbio milk and cheese products.

Unlike transgenic GMOs, the federal government’s regulation of food products produced using genetically modified rennet or products involving synthetic biology can be less involved though varies by prodcut. This may seem convenient for scientists and entrepreneurs, but that relative anonymity could backfire if the public feels that “untested” products snuck their way past regulators and onto grocery store shelves.

How the new companies position their products is key. How to play the “natural” card is the most difficult challenge. Synbio dairy companies could learn from Evolva, which started marketing its synbio vanilla as “natural” because it is produced using fermentation. Evolva saw this as a marketing opportunity because artificial vanilla is produced with petrochemicals and paper mill waste. But the wording caught the attention of activist organizations Friends of the Earth, Organic Consumers Association, Center for Food Safety and others, who wrote a letter in 2013 to Haagen-Dazs urging the company to reject using synbio vanilla in its ice cream, saying the product is not “natural.”

Friends of the Earth also called out synthetic biology, claiming it was “unsustainable”. Sugars are used to feed the yeast cultures used in synthetic biology, and demand for sugar could put pressure on sugar cane production, which already threatens rainforests, it argued. Most other scientists would argue that synbio products are far more sustainable as a class than alternatives.

Yet, appealing to consumers’ concerns for sustainability seems to be the clearest message from scientists creating synthetic dairy products. According to Muufri, globally, dairy cows contribute to around a quarter of these greenhouse gas emissions. Producing a dairy-free milk will help to reduce emissions. 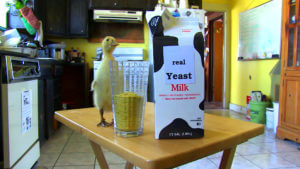 Synbio dairy products are also being developed by small companies that will ultimately need to compete with Big Dairy. This competition could benefit a company like Muufri in the long run, as its future customers, presumably those concerned about the predominant food system, will be more than ready to buy into the disassociation with industrialized dairy farms.

Ultimately, though, scientists face the taste test. Environmental leanings aside, consumers will want to it to taste as good or better than dairy.

It is, with incredibly rare exceptions, a losing proposition to attempt to get people to switch from a product they already like by offering a product that you advertise as “just as good.” Imitation is simply not a successful marketing tool, no matter how impressive.