The “eco warrior goddess” has returned to Hawaii, and that’s not good news for those committed to science literacy and sustainability.

I’m referring to Vandana Shiva, the Indian anti-GMO crusader who kicked off a five-day blitz through Hawaii with a talk-and-music fest at the Capitol Building on Wednesday. Anti-activist groups wearing chemical suits tried to make the case to state legislators that seed company research centers in Maui and elsewhere on the islands are endangering Hawaiians by using chemicals in their test plots—despite studies by the state and federal government rebuffing those claims.

She’s on a grand tour, marked by private fund-raising pitches to wealthy locals and wannabees from the mainland who view the limited role of biotechnological research in modern agriculture as an anathema—Hawaii is a world center because of its favorable climate. 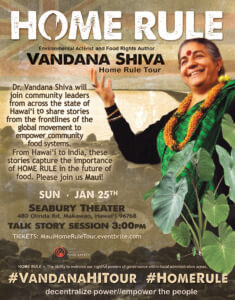 Campaigns, like this tour aimed at shutting down nursery centers, most based in Maui, could send the seed giants fleeing to Puerto Rico or the Philippines, costing Hawaii hundreds of millions of dollars and hurting the cause for sustainability in the process.

Shiva’s visit caps off with a Sunday afternoon rally at the Seabury Theatre on Maui with headlined demands for what the prime organizer—Washington, DC-based Center for Food Safety (CFS)—calls “home rule”. While polls show a majority of Maui farmers and residents oppose the effort to shut down the seed nurseries and research labs, anyone but diehard opponents of modern agriculture will be personae non grata at this rally.

Shiva is reprising her 2013 tour, also led by CFS, which oversees scheduling of her $40,000-a-pop promotional speeches. A Brahmin who professes to stand with the downtrodden, Shiva maintains her goal is “giving voice to those who want their agriculture free of poison and GMOs.”

On her arrival two years ago, Shiva was an exotic unknown—a “rock star in the global battle over genetically modified seeds”, in the words of journalist Bill Moyers. Here in Hawaii, she was treated as a foreign dignitary. No one dared criticize her.

Now, two years later, as more details of her philosophy and background have emerged, a darker picture has emerged. She leverages her claim as an expert at every stop. “I am scientist… a Quantum Physicist,” she claimed, until recently on her website and in many books, a claim repeated by journalists, even prominent. But she’s not. He degree was in humanities—she’s a philosopher of science, but has no professional hard science background or writings.

To her followers? Details, Details. She is fiery and charismatic Beware of Big Ag and the health dangers of GMOs and pesticides. Take back Hawaii!

Veteran of thousands of anti-GMO speeches, Shiva has developed a polished script: with key talking points.

The Green Revolution? The introduction of modern agricultural techniques, particularly in the developing world beginning in the 1950s promoted high-yielding varieties of cereal grains, expansion of irrigation infrastructure, modernization of management techniques, distribution of hybridized seeds and making available advanced nitrogen fertilizers and pesticides to farmers. It’s credited by the United Nations with saving more than one billion lives.

But Shiva believes the Green Revolution has been a sham. By 1991, she was publicly calling it “a failure,” that has led to diminishing productivity and kills farmers.

“Until the 1960s, India was successfully pursuing an agricultural development policy based on strengthening the ecological base of agriculture and the self-reliance of peasants,” Shiva has written, framing the past as an Eden-like wonderland of equality and agricultural fertility. Facts: During the 1960s, India faced mass starvation and imported most of its grain—11 million tons in mid decade. Frail Indian children dying of malnutrition filled the pages of global magazines. Fifty years later India produces 250 million tons annually. The Green Revolution has increased world food production more than 300 percent since 1950, all on about the same amount of land. Certainly there have been some negative consequences from industrial agriculture, especially in its early years when scientists beginning to master the complex chemicals needed to jump start yields. But to call it a failure is demagogic.

What about Shiva’s claim that the introduction of GMOs in India in the early 2000s has spurred mass suicide by farmers? It’s one of her most popular applause lines, one that stirs the hearts of her dedicated followers.

“Suicides have intensified after the introduction of GMO Bt cotton [in India],” she has written. Again and again, a trope disseminated even by mainstream publications such as The Guardian, without fact checking. “…[S]eed monopolies… the collection of super-profits …has created a context for debt, suicides and agrarian distress which is driving the farmers’ suicide epidemic in India.”

Facts: Shiva’s claims are false. She alleges a link between farmer suicides and the adoption of Bt cotton in India when no causal link exists. The International Food Policy Research Institute (IFPRI) reviewed the government data, academic articles and media reports about Bt cotton and suicide in India in 2008 and 2010, concluding that farmer suicides predated the introduction of GMOs, reflect the broader trend in suicides in the general population and have in fact leveled off in the agricultural sector in recent years. 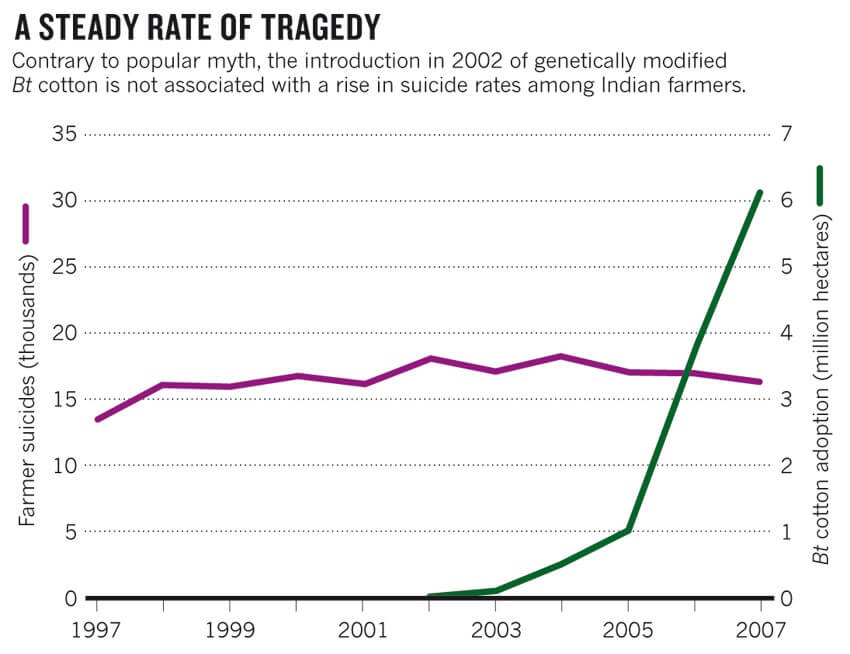 “[I]t is nonsense to attribute farmer suicides solely to Bt cotton,” wrote Dominic Glover, an agricultural socio-economist at Wageningen University and Research Center in the Netherlands in an article in Nature two years ago. “Although financial hardship is a driving factor in suicide among Indian farmers, there has been essentially no change in the suicide rate for farmers since the introduction of Bt cotton.” 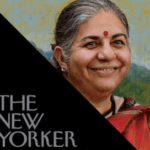 These misrepresentations are just the tip of the Shiva fear-generating iceberg. For background, readers could check out this Forbes analysis and the award-winning profile, “Seeds of Doubt”, by Michael Specter for the über -liberal New Yorker published last summer, a scathing rebuttal from Shiva and a reply to Shiva by Specter’s editor, David Remnick.

Perhaps the most frightening consequences of this kind of misrepresentation is that it helps sow doubt about applications of agricultural biotechnology that almost everyone agrees is beneficial: tweaking crops to protect them against deadly diseases (the Hawaiian papaya) and insects (Bt crops) or adding nutritional elements, such as in cassava, an African staple, or rice, an Asian staple.

Almost 700,000 children under the age of 5 die every year from Vitamin A deficiency disease. Golden Rice, in development in the Philippines, has been genetically engineered with enhanced production and accumulation of β-carotene in the grains. It was developed independent of major corporations and patent free by Ingo Potrykus of the Swiss Federal Institute of Technology and Peter Beyer of the University of Freiburg. Shiva calls Golden Rice a hoax, a myth and a false solution referring to it as “a blind approach to blindness prevention…..”

“The Golden Rice pushers are in fact worsening the crisis of hunger and malnutrition,” she writes on her website, Navdanya. “Promoters of Golden Rice are blind to diversity, and hence are promoters of blindness, both metaphorically and nutritionally.”

But the people who come to her events by and large are already persuaded by her anti-corporation, enviro-romantic view of the world. She holds the crowds in thrall The soaring rhetoric resonates with many in Hawaii who see themselves as idealists, Davis vs. Goliath.

In overstating her credentials and spreading an ideological agenda as if it is fact, Vandana Shiva asks the public to believe she is an expert in farming, chemicals, biotechnology, global politics and poverty. She has indeed evolved into a rock star— a major influencer and one of the central fundraisers for the anti-biotechnology cause. Vanda Shiva’s prescriptions for Hawaii and global food security deserve to be judged based upon the integrity of her arguments and the empirical evidence, not on the raw emotion that she can stir in a crowd.

Jon Entine, executive director of the Genetic Literacy Project, is a Senior Fellow at the World Food Center Institute for Food and Agricultural Literacy, University of California-Davis. Follow @JonEntine on Twitter.