What turned the organic movement against GMOs?

The idea behind the organic movement has some virtues: using fewer chemicals that might be more dangerous, reducing logistics and trying to protect diversity. Unfortunately, it has been pretty badly perverted. The organic movement has been convinced that having plants produce their own Bt (and thus not spraying it into the air or onto the soil) is somehow worse than literally spraying it onto the plants (which is allowed in organic farming).

But the movement has gone from one based on a valid idea to something completely different, shunning targeted changes but pretending as if using ionizing radiation on seeds is somehow safe… without testing. Rejecting progress, rejecting and banning things like golden rice (that are literally offered for free to poor farmers in regions where vitamin A is difficult to become in one’s diet) based solely on the argument that it isn’t “natural,” all while using radiation to create unclear changes that will not be tested for their safety.

There is nothing about genetic engineering that makes it inherently risky, and in many ways it is less risky than current mutation breeding practices. 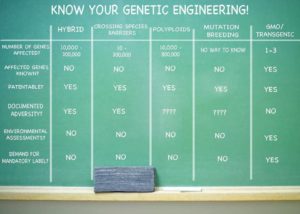