The fierce public relations war over genetically modified food has a new front. A nonprofit group opposed to GM products filed a flurry of freedom of information requests late last month with at least four U.S. universities, asking administrators to turn over any correspondence between a dozen academic researchers and a handful of agricultural companies, trade groups and PR firms.

The scientists—many of whom have publicly supported agricultural biotechnologies—are debating how best to respond, and at least one university has already rejected the request. 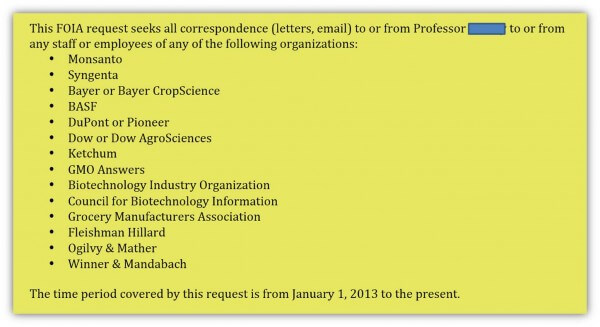 “It seems like a fishing expedition to me,” says geneticist Alison Van Eenennaam of the University of California (UC), Davis, one of six UC researchers targeted by the requests. “I am very worried [the correspondence] is going to be used to sully the reputations of scientists.” The tactic is familiar in another controversial area, climate science, where researchers have faced an avalanche of document requests from climate change skeptics.

The group, U.S. Right to Know (USRTK) of Oakland, California [whose founders led the failed campaign in California to pass a GMO labeling law], says … It has targeted only researchers who have written articles posted on GMO Answers, a website backed by food and biotechnology firms, says Executive Director Gary Ruskin.

USRTK is … “especially looking to learn how these faculty members have been appropriated into the PR machine for the chemical-agro industry.” USRTK’s website says its sole major donor is the Organic Consumers Association, a nonprofit group based in Finland, Minnesota, which has donated $47,500. [Editors’s note: Read GLP’s profile of the Organic Consumers Association]