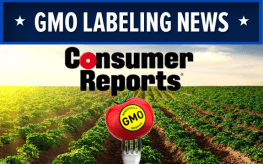 Consumers Union, whose magazine Consumer Reports has built a reputation for impartial and reliable reviews of everything from household cleaners to SUVs, has hardened its stand against GMOs, further distancing its views from the mainstream science community.

In its latest blog post, the consumer organization claims that genetically modified food hasn’t been proved safe, could “introduce toxins or new allergens,” and “might cause damage to the immune system, liver and kidneys.”

Consumer Reports then quotes Robert Gould, pathologist and president of Physicians for Social Responsibility (an advocacy group known for its opposition to nuclear energy and with no expertise in food, agriculture or genetics), who claims that “studies have measured a time frame too short to determine the effects of exposure over a lifetime.”

But wait, there’s more danger! Consumer Reports claims that growing genetically modified food could be bad for the environment, creating “an epidemic of super-weeds,” choking American farms and requiring an ever-escalating need for more herbicides.

In addition to its blog posts, the organization’s increasing stridency shows up in responses to consumers who sent letters or emails requesting the scientific evidence supporting CR’s anti-GMO positions. One frustrated consumer shared his exchange with Consumers Union with the Genetic Literacy Project. When Erasmo Salazar, a food safety specialist for Lloyd’s Register, asked for evidence to back up CR’s safety warnings, he received this response from Consumer Reports Customer Relations Representative Evelyn Lopez–almost a word-for-word parroting of the ‘warning’ posted in a Consumers Report blog posted last fall that ominously warned that GMOs were “lurking” in our food supply:

I have forwarded your inquiries about GMO safety to the appropriate experts in our lab. To help answer your question, I have included an excerpt from one of our articles:

You may be surprised to know that the federal government has not mandated that genetically modified organisms be proved safe before they’re used in your food. But safety assessments are mandatory in other major developed countries, including China, Japan and the countries of the European Union. Some animal studies suggest that GMOs may cause damage to the immune system, liver, and kidneys. ‘There hasn’t been enough research to determine whether GMOs are harmful to people,’ says Michael Hansen, Ph.D., senior scientist at Consumers Union and an authority on genetic engineering. ‘But scientists around the world agree that GMOs have the potential to introduce allergens and create other unintended changes that may affect health.’

The use of genetically modified seeds has steadily growth over the last two decades. That has led to about a 10-fold increase in farmers’ use of glyphosate, a weedkiller better known as Roundup…because the herbicide won’t harm their GMO crops. But that…has created a new problem…a rising number of “superweeds” that have now become immune to glyphosate.

Consumers Union concluded its letter by asking for a donation to support its $27 million investment “into our product testing program.”

Consumers Union has also posted a video on YouTube promoting the discredited research by French Science Gilles-Éric Séralini, who had published a study that purported to show rats who got cancer for consuming GMOs. The study was eviscerated by mainstream scientists, reviewed and rejected by independent food safety authorities around the world, and subsequently retracted–yet it remains one of the talking points for Consumer Reports. French scientist

How much are any of CR’s dire warnings are true? Here’s a scientific review of the organization’s claims:

1. “No evidence of harm isn’t the same as saying they’ve been proved safe.”
No scientist worth his or her lab coat would ever say something’s been proven. Any scientific inquiry carefully examines the evidence at hand, creates a hypothesis against which to test, and concludes with something along the lines of “this is what we know so far.” In the case of GMOs, there have been thousands of reviews and studies on the possible health affects of GMO foods, including this Italian study from 2012 that looked about 1,800 other studies over 10 years. Their conclusion? “(research)…so far, has not detected any significant hazards directly connected with the use of GE crops.”

At this point, animal studies on GMOs have reached 25 years, and involve at least 130 research projects involving 500 researchers, without finding a scrap of evidence toward GMO’s harm, said a report from the European Commission, of all places.

Conversely, no known studies that indicated a link between GMOs and harm to health have withstood any scientific scrutiny. From the still-touted studies by Seralini and Judy Carman, which quickly lost credibility due to poor methodologies, to a 2011 study linking RNAi (a short strip of RNA, which can silence and otherwise regulate other genes) to GMO-induced harm, which couldn’t be replicated, no evidence of harm from GMOs has yet to be found.

Ironically, the most common hazard found in foods is pathogenic bacterial contamination, introduced by mishandling of food, said Val Giddings, senior fellow at the Information Technology and Innovation Foundation, a “think tank” in Washington, D.C. that focuses on introducing technology to society.

Giddings also pointed out that FDA regulations do not require that any food is “proven” safe (including organic or conventionally grown food, of course). “They’re applying a standard for crops derived from biotech that they would never apply for other foods,” he said. “Meanwhile, we have done more detailed compositional analysis of biotech foods than any other foods in history,” said Giddings.

2. “The contention that GMOs pose no risks to human health can’t be supported by studies that have measured a time frame that is too short to determine the effects of exposure over a lifetime,” said PSR’s Gould.

This claim appears to have more in common with “moving the goalposts back” than with presenting any scientific evidence. “After hundreds of studies, including multigenerational studies, the proper studies have failed to show any risk,” said retired food chemist Bruce Chassy.

However, in an interview with the Huffington Post, Consumer’s Union Michael Hansen insisted that the Seralini study still had merit, because it continued a Monsanto study for another two years to find those tumors (the actual results, as we know, did not actually show evidence of anything that was significant, except that some rats may have emerged healthier).

Meanwhile, GMOs have been consumed, tested and subjected to regulatory review for about 30 years now, without evidence so far of harm to consumers.

3. Genetic modifications can introduce previously unseen allergens and toxins.
To date, no such hazards have been reported. In addition, the risk of introducing such allergens and toxins is infinitesimally small, said Giddings. Even in conventional food, such allergens exist, but are rare and tested for. “Peanut allergies, for example, can be fatal but they are rare.”

Comparative assessments of biotech, conventionally grown and organic food have had consistent results: biotechs are the safest, followed by conventional food, with organics quite far down the safety list. “Recalls of organic food are common, mostly because of microbial contamination.” When you consider where and how organic food is grown, this is not too surprising. But this fact appears to have escaped Consumer Reports’ extensive product testing, given their recommendations toward organic food.

4. The FDA only does “voluntary” reviews, which means that the US doesn’t require safety testing on GMOs.

“This is truth pulled in a way to convey a lie,” said Giddings, in a GLP article that accuses Hansen and Consumers Union of making false claims. The FDA in fact requires that all foods placed on the market in the United States to be safe. Violators are subject to criminal penalties. The issue being brought up here is the word “voluntary.” The FDA relies on tests from submitters for all foods, not just GMOs; this way, it’s up to the submitter to pay for the proper testing, which the FDA approves or disapproves (or sometimes asks for more information). Even Hansen, in an interview with Nathanael Johnson of Grist, could not identify a GMO submission that was not made with safety data to the FDA. In addition, all agricultural products must pass field testing required by the US Department of Agriculture, and allergen testing required by the US Environmental Protection Agency.

“To believe these claims, means you’re saying the regulatory system is corrupt, and incapable of discerning science,” said Chassy. Meanwhile, studies from the National Science Foundation, Great Britain’s Royal Society, expert panels in every country, from academe, industry, and non-profits, and 88% of members of the American Association for the Advancement of Science (PEW study released in later January) have reached a consensus that approved foods made from GM crops are as safe or safer than conventional or organic foods.

Consumers Union’s Michael Hansen, however, is one of 93 signatures of a document avowing “no consensus” among scientists and physicians about the safety of genetically modified foods. The document, also signed by Seralini and well-known anti-GMO activist Vandana Shiva, is part of the European Network of Scientists for Social and Environmental Responsibility (ENSSER), a group with a clear anti-GMO agenda.

5. Invasion of the Superweeds.

Finally, the Consumer Reports post (and letters to consumers) claimed that introducing such genetic modifications as glyphosate resistance is harmful for the environment, creating a generation of weeds that themselves become resistant to glyphosate.

Resistance to pesticide can happen with any weed, and any plant, Chassy points out. That’s one issue that farmers and Consumer Reports could agree upon. But is glyphosate safe? Consumer Reports’ latest post skirts the issue, instead focusing on the increase in glyphosate-resistant weeds.

But according to the USDA, while glyphosate use has risen, the overall use of herbicides and pesticides has declined—the peak use of each was in 1982. And so far, no credible studies have shown toxicity of glyphosate in humans. “Glyphosate is safer than most other herbicides. If a farmer has to use an herbicide (and they’d rather not), they’re better off with glyphosate,” said Chassy. However, anti-GMO activism has helped prevent other resistance varieties of crops to be approved, making things easier for weeds to resist the few existing herbicides that can be used on crops, Chassy noted.

The Consumer Reports article also claims that resistance to glyphosate is making farmers turn to the use of 2,4-D, a herbicide that has been used on residential lawns for decades. In this case (unlike glyphosate), the organization cite studies that link 2,4-D to non-Hodgkins Lymphoma, birth defects and reproductive problems. However, three EPA reviews (in 1998, 1992, and 2004), with no conclusive evidence of health problems so far.

Where is the independence?

Consumer Reports’ stance, responses to consumers and public statements appear strongly at odds with scientific consensus about genetically modified foods. While there may be ethical or ideological issues revolving around genetic modifications, none of these concerns arise from Consumer Reports’ blog posts, letters or testimony. In fact, the organization’s stance has been taken without even explaining why its “experts” think GMOs are harmful. For example, in a recent review of soy milks, Consumer Reports simply lists genetically modified soy as a “con,” with no rationale. Which makes one wonder about Consumer Reports’ request for a donation to support its “plan to invest $27 million in our product testing program” would actual help achieve.