What would you do if a biotechnology startup accelerator in another country offered to fund your personal project while you’re still in graduate school?

For Kevin Chen and Sarah Choukah, it was a world changing opportunity to follow their muse and to create something new and impactful. It also meant taking a big risk and putting graduate school on hold to pursue their unproven technology. 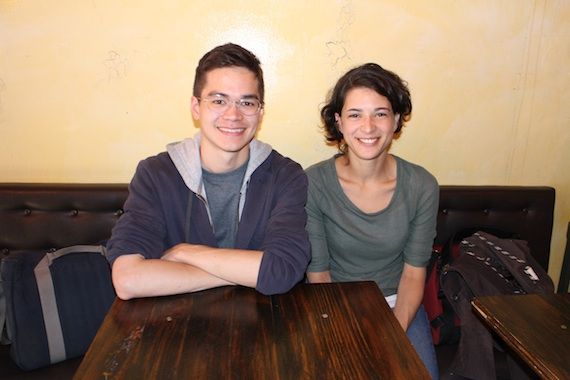 How did this all happen? It began with a Canadian citizen science lab, synthetic biology, and the Indie Bio Accelerator’s inaugural cohort in Cork, Ireland. The team first met in the summer of 2013 at Montréal’s biohacker group, Bricobio, and casually decided to apply for the synthetic biology startup accelerator program, Indie Bio.

“We didn’t expect this to take off so quickly. We both went into it ad hoc, to see what would happen,” said Chen, a graduate of Queen’s University, who was enrolled in a Master of Science program at McGill University at the time of his acceptance at Indie Bio.

Choukah, a PhD student in her final year at Université de Montréal, was studying emerging science in the Department of Communications. Her interest in biology emerged after spending a year in New York City’s community lab Genspace, where she took workshops in synthetic biology. She had no previous background in life science.

“I’m the product of the DIY bio community; the ability to meet people and work on projects in a non-institutional way was amazing,” said Choukah.

Enabled by the increasing accessibility of tools and knowledge, Do It Yourself Bio is part of a growing grass roots movement called citizen science that began half a decade ago to help spread the word about accessible biotechnology and to encourage the independent development of biological solutions.

When the news came out that team Hyasynth Bio was accepted into the inaugural Indie Bio program, things became real. Pack up and leave academia?

The lack of autonomy in academia was a major concern for Chen. “As a masters student, you tend to work on a pre-defined project for several years, whereas, I wanted to try new things, test new ideas, rather than use old ideas to tackle a problem,” he explained

There were also financial considerations. If hen remained as a masters student, he would earn approximately $18,000 annually in stipend and scholarships. That’s not much to live off of but he would be doing research and earn a degree in the end. Being a co-founder and shareholder of a company is quite different. Because he started the venture with Indie Bio, the salary was about the same but having equity in a company is a very different motivator, he said. “Also, the light at the end of the tunnel isn’t a piece of paper [diploma], it’s a great product, that hopefully makes the world a better place”.

While Chen’s earnings remained similar, Choukah’s declined. As a recipient of a prestigious scholarship for her Ph.D., she was granted $105,000 over three years —more than what she was earning at their start up.

“I saw this as a worthwhile kind of investment, not a loss,” she said. “There was so much potential to learn, grow, and make long term financial gains.”

Making a graceful exit from academia

Chen traded his master’s degree for a role as an entrepreneur, but with that came the painful task of informing his research advisor about this decision, which wasn’t easy, he says.

“He wasn’t in favor of me quitting or taking a break which was unfortunate,” he said of his advisor. “Universities are institutions that are supposed to provide students with knowledge to impact the real world; I was ready for that, but wasn’t supported. There could have been a lot of mutual benefit, perhaps a partnership, but that didn’t turn out to be the case.”

Choukah’s department was much more open-minded and she was encouraged by her advisor to pursue new opportunities. “This is [Sarah’s] decision, the degree can wait. As long as she finishes it one day,” said Bardin Thierry, her thesis advisor at Université de Montréal.

Choukah said she wants people like herself in PhD programs to make this jump without feeling hindered or guilty. She pointed out that at present there are a number of factors that push people outside of university and corporate walls.

“It’s hard to find jobs and funding nowadays, and the institution restricts originality overtime” she responds. The citizen science community is made of unconventional people, working in unconventional spaces, with unconventional tools—that’s the milieu that breeds self-driven innovation and fun.

Since their time in Cork, the two have moved back to Montréal to reunite with the rest of the Hyasynth team. They have raised additional funding which has equipped them with a similar order of funds as their professors and they can continue to build their vision of producing medical treatments using cannabinoids. Chen feels that what they’re doing now has a direct impact on cannabis, synthetic biology, and the pharmaceutical industries, whereas in academia, there’s a tendency to think less about the end application.

What’s the takeway for others interested in exploring the fast-expanding field of synthetic biology? Chen and Choukah recommend that if you:

Software development used to be the only low barrier entry point to the high tech-sector, but now is the time for life science and synthetic biology—bio-developers and bio-entrepreneurs.

‪Vipal Jain, who works for Synbiota, earned her degree in genetics and biotechnology at the University of Toronto. She is interested in the human and legal aspects of synthetic biology.