Pamela Ronald is at the global TED conference to talk about her work as a plant geneticist, about her quest to “study genes that make plants resistant to disease and tolerant of stress.”

Genetic improvement of plants isn’t new, she says. Ancient corn had a case so hard that it couldn’t be chewed; the ancient banana was full of large seeds; ancient brussels sprouts weren’t actually individual objects. “To create these crops, breeders used many kinds of genetic techniques,” says Ronald. “Today breeders have even more the options choose from. Some of them are extraordinarily precise.”

“A lot of people don’t mind genetic modification when it involves moving rice genes around,” says Ronald, “but when it comes to taking genes from viruses and bacteria and putting them into plants, people say ‘Yuck! Why would scientists do that?’”

Ronald’s answer: “Because sometimes it is the safest, cheapest and most effective technology to advance sustainable agriculture and enhance food security.”

In the 1950s, the papaya crop on the island of Oahu in Hawaii was threatened by a ringspot 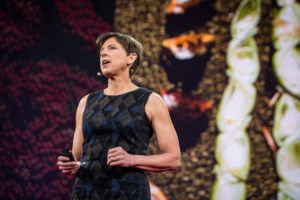 A local Hawaian plant pathologist named Dennis Gonsalves had an idea. He spliced a snippet of the DNA of the virus into the papaya genome — and it worked. It made the papaya resistant to the virus. “His pioneering work is credited with rescuing the papaya industry,” says Ronald. “Twenty years later, no other method is as effective.” 80% of all Hawaiian papaya is now engineered in this way.

Genetic engineering has been used commercially for 40 years in wines, cheeses and much more. And in that time, there hasn’t been a case of harm to human health or the environment, she points out. “Look, I’m not asking you to believe me. Science is not a belief system. My opinion does not matter.  Let’s look at the evidence. After 20 years of careful study and rigorous peer review by thousands of independent scientists, every major scientific organization in the world has concluded that the process of genetic engineering is as safe or safer as older methods of genetic modification.”

She ends: “What scares me most about the loud arguments and misinformation about plant genetics is that the poorest people, the people who most need the technology, may be denied access because of the fears and prejudices of those who have enough to eat.”