How to genetically engineer a better tomato

So, I think we’ve all seen this type of image from anti-GMO activists: 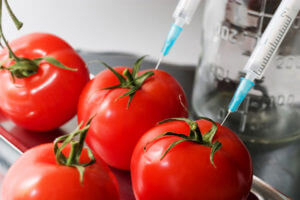 The irony is that this is so completely divorced from what one actually does to modify a tomato, or indeed any plant, that it only serves to polarize. Also, it allows people who study genetics to immediately identify someone with absolutely no knowledge in the area of genetics, or genetic engineering.

So how is it really done?

Well, there are a couples ways. One of the most common, and classic, is using Agrobacterium tumefaciens. This bacteria has the special ability to take a certain part of its DNA (TI plasmid) and insert it into plants, and have this same DNA gain access to the nucleus. It doesn’t work on every species or family, but it works on quite a few, including Solanum (which includes potatoes and tomatoes). When used, it is applied primarily to female reproductive cells, allowing the plants to pass it onto the next generation.

The most famous way is probably using a “gene gun,” which also leads to a random incorporation of the added DNA. Remember that prior to ever being reproduced, all GM crops are analysed on a genetic level to figure out not only how many copies of the added gene are there (they only take clones that have a single copy), but also to determine in which clones there was no interruption of normal genes.

Read full, original article: How do you actually make a GM tomato?