In BBC’s documentary, as well as previously in The New York Times and other publications, there’s been a dramatic change taking hold regarding the reporting of GMOs. Journalists no longer feel obligated to give equal time or weight to campaigning environmentalists and their extreme views when science is not on their side. And, in particular, there’s a firm rejection of activist claims that GMOs are unsafe.

“A new generation of genetically modified crops is emerging from the labs to reignite the arguments around GM foods,” reporter Tom Heap says introducing the documentary that featured a handful of scientists, former critics of genetic modification and current anti-GMO activists. The program features newly developed genetically modified crops that reduce chemical usage or increase nutritional content of foods and are mostly targeted for the developing world.

During the program, Heap asks Greenpeace UK’s chief scientist Doug Parr about why the organization opposed developing or eating GM foods, which led to a testy exchange about lack of evidence over claims surrounding safety:

“We can’t give any blanket assurance that GM foods are safe to eat,” Parr said.

Heap responds, “They’ve been eating them in America for close to 20 years, probably billions of meals, famously litigious society, no one’s brought a case saying it’s damaged their health.”

Revising his statement, Parr then says, “In a single instance where GM crops have been shown to be safe if indeed they have been, does not give any kind of blanket assurance that other unpredictable effects happen in other crops or other foods.”

Later in the video, Heap also says to Parr, “Surely the balance you got here is a certainty of using less pesticides and that is better for the farmer, better for the consumer, quite possibly better for the environment against these hypothetical kinda ‘what if risks’ that you’re throwing in.”

Former Greenpeace UK executive director Stephen Tindale, who led the organization from 2001 to 2005, also appears on the program, discussing his own conversion toward supporting GM crops. “In my view it’s unacceptable, morally unacceptable, to stand out against these new technologies,” Tindale says.

He adds, “I worry for Greenpeace and the other green groups because, by taking such a hard-line on GM, they could be seen to be putting ideology before the need for humanitarian action.”

The documentary features GMO potatoes that are being developed in the UK, as well as eggplant. known as Bt brinjal, developed by Cornell University researchers, which is commonly consumed in Bangladesh.

Bt brinjal is produced by inserting a gene from natural soil microbes, Bacillus thuringiensis, into the aubergine plant that acts as a pesticide for controlling against the fruit and shoot boring caterpillar, a known devastator of crops. Bt is widely used by organic farmers and has been used safely in agriculture for a thousand years. Bt crops have dramatically reduced the use of chemicals–US Bt crops have helped cut insecticide use by 10-fold over the past 10 years–and increase yields for Bangladesh’s 70 million farmers.

As a result of the use of Bt crops in Bangladesh, India, the Philippines and elsewhere, tens of thousands of farmers never see a doctor for their ailments related to insecticide use. When interviewing one of those farmers, Hafizur Rahman, who is part of a government project testing the new crop, Heap was told that the farmer used to spray insecticides twice a week and developed health problems. But after switching to Bt brinjal he no longer has to use pesticides to control the brinjal eating caterpillar.

“This has enormous international significance,” says Mark Lynas, a journalist and former anti-GMO campaigner who is now affiliated with Cornell University’s Alliance for Science, a Gates Foundation outreach project focused on helping farmers in the developing world, “because this is the first genetically modified food crop anywhere in the developing world to actually be in the hands of farmers and to be in the markets with people now eating it.”

Because the Bt gene has demonstrated a strong safety profile — it’s been added to corn and soybeans and safely eaten in the U.S. for nearly 20 years — Lynas sees it’s development in brinjal, and seeds given for free to Bangladesh farmers as part of a U.S. aid project, as a clear representation of why he chose to no longer oppose the technology.

“In my mind when I was an anti-GM activist this was only going to benefit big corporations,” Lynas says, “and here you have the exact opposite. It’s just a way of protecting a crop against an insect pest. There’s nothing that scary about it.”

Still the country has its own GM opponents, including organic farmers, one of whom says that she doesn’t want Bt brinjal in the country because “we don’t want to open the lock of the door” for other GM foods that could be unsafe. That’s the scare message carried by anti-GMO activists, including Greenpeace International, which strongly opposes BT brinjal. In 2011, activists destroyed a university trial on the crop in the Philippines that resulted in costly damage.

In explaining Greenpeace’s opposition to Bt brinjal, Parr says, “There’s reasonable evidence that the particularly modification could transfer to wild native relatives. There’s other evidence that suggests that there’s a health risk associated with it.”

“I’m sorry.” says Heap.” Where’s the evidence?” Mainstream scientists universally say there is no evidence that GM brinjal could cross with wild relatives and no evidence of any health or safety hazards.

Jonathan Jones, who once belonged to Greenpeace and is now a professor of plant science at Sainsbury Laboratory in Norwich, UK is featured working on the development of what Heap calls a potential “game-changing GM potato.”

Through insertion of a few genes into the potato, the technology could protect crops against round worms, bruising and late blight, a plant disease that costs 55 million pounds a year to British farmers each year.

But the technology may not ever come to fruition due to strict European Union regulations passed in part because of activist scare campaigns by Greenpeace and other anti-GMO campaigners. So the potato is being shipped abroad to the U.S. “We essentially have a broken market regulatory system here,” Jones says.

Former chief scientific advisor to European Union tells Heap, “There’s never been a technology which has had so much money spent on it in terms of looking at the safety. If politicians had the leadership, perhaps the bravery, to say that they had looked at the evidence and say we accept the technology is safe.” But leadership in seeking the approval of citizens tend to continue to vote against it. Independent science bodies in Europe universally have endorsed the safety of GM crops–including the European Commission, the European Food Safety Authority, and academies of science in France, Germany, Belgium and elsewhere– 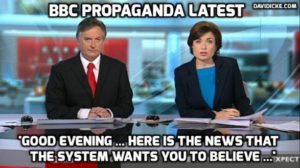 Not everyone featured in the Panorama episode was keen on the idea of having GM crops in the country either, despite their safety. “The technology is being used in the wrong way and we need to make sure that we have controls for what we want in the countryside—and at the moment GM fits nowhere into that picture,” said Helen Browning, chief executive of The Soil Association, a non profit that campaigns for organic produce.

The program has led to a predictable backlash from anti-GMO activists. They’ve taken to publicly shaming the BBC and Heap on Twitter for its apparent pro-GM reporting and its stance on GM safety. Anti-GMO journalists Lawrence Woodward and Pat Thomas have placed an identical article on numerous anti-GMO websites, calling the report unbalanced and questioning the ethics of the interviewer and the credibility of the interviewees.

Understandably for Greenpeace and other anti-technology green groups, the episode appears to be a public relations nightmare. Perhaps they’re right. Similar in ways to how The Guardian is now reporting on climate change and The New York Times on vaccines, the trends surrounding GMO stories look to be headed toward less “false balance” and more credible scientific write-ups by journalists and greater favorable acceptance of the science surrounding GM crops by the public.

Note: BBC’s Panorama may not be viewable for U.S. readers; however, an entire recording of the video has shown up on YouTube.

David Despain, M.Sc., is a science and health journalist based in Gilbert, Ariz. He is also Director and Managing Editor of Bionomics, Genetic Literacy Project. Follow @daviddespain on Twitter.