American attitudes toward GMO foods divides by education and gender, not politics nor religion

While the United States prepares for what promises to be yet another intense presidential election in 2016, science-related topics are once again expected to be at the forefront of political debate. In general, American attitudes toward science, such as climate change and evolution, tend to be strongly linked toward their political or religious views—and we can be sure that candidates will cater their rhetoric to whatever they believe will be most appealing to voters.

However, a new phone survey analysis by nonpartisan fact tank Pew Research Center (PRC) determined that political or religious affiliation matters a lot less when it comes to public attitudes toward other science-related topics. These include biomedical issues like whether vaccines should be required, modifying genes to reduce an infant’s risk of disease, use of animals in research, or the safety of genetically modified organisms (GMOs) or foods grown with pesticides.

With respect to food safety issues, the PRC survey found that acceptance of use of GMOs crops and pesticides depended far more on education and gender than on other factors including politics or religion. Moreover, the authors reported that the topic of GMO safety accounted for some of the largest differences between those with a “higher education and greater science knowledge” as compared with those without, and that men were more likely compared to women to consider GMO foods safe to eat. There were no significant differences found between Republicans and Democrats or those who lean to either party and attitudes surrounding GMOs.

Cary Funk, associate director for science research and lead author of the PRC study, said the findings on GMOs were “striking” because they demonstrated that politics doesn’t always influence attitudes toward science issues. Education, in the case of GMOs, was the most important influencing factor. “Those with more science knowledge are more likely than those with less knowledge to say eating genetically modified (GM) foods and eating foods grown with pesticides are safe,” Funk and her colleagues wrote in their final PRC report.

However, others warn against drawing conclusions too hastily from the PRC survey. While the margin of error was reported, the response rate for the survey and demographics were not reported, noted William Hallman, chair of the department of human ecology at Rutgers University. “This is potentially problematic because when response rates are low (which is often the case with telephone interviews) it is difficult to assure that you have a representative sample of the population,” he told GENeS, a journalist news service that solicits quotes from scientists commenting on the latest news in genetics and biotechnology, which was founded with seed money from the Genetic Literacy Project.

The section about GMOs is “particularly troubling,” Hallman added. In previous studies including his own he’d found that too few Americans know enough about the issues involved regarding GMOs to form any kind of informed opinion about them. Two thirds had reported never having a conversation about GMOs in their lifetime.

Yet the PRC results are similar in respect to an online survey performed more than a year ago that examined the effect of scientific information on belief and safety of GMOs. In that earlier research, questions were more directly related to the technology of genetic modification, according to Brandon McFadden, an assistant professor of the department of food and resource economics at University of Florida. “This indicates that some of the results are robust and stable. For example, we both came to the conclusion that people with more scientific knowledge were more likely to agree GM foods were safe to eat. We also both concluded that females were less likely to agree that GM foods are safe to eat,” McFadden told GENeS.

Most interesting about the PRC survey, McFadden said, was that there wasn’t any significant difference in attitudes between Democrats and Republicans. He found similar results, however, that changed when he further distinguished political parties by degree of affiliation—strong democrat, democrat, lean democrat, for example. Survey respondents who considered themselves “strong democrats” were more likely to agree that GMO foods were safe to eat.

Regardless of the differences on how the research was conducted, what the PRC survey results demonstrate is that it’s wrong to assume that all science issues are politicized. It can just comes down to personal decisions, according to Andrew Maynard, a professor of environmental health sciences and director of the Risk Science Center at University of Michigan.

“Overall, the survey counters simplistic narratives around politics and science, and lays a strong foundation for public engagement and dialogue around science and technology,” Maynard told GENeS. “By understanding better the factors that affect people’s attitudes toward science and technology, it becomes easier to engage them in meaningful dialogue around how they are developed and used within society.”

In summary, the Pew Research Center analysis reported the following on the topic of GMOs:

To read the full Pew Research survey report, click on this link (or image below) to access it in PDF format or on this link for the web interactive version. 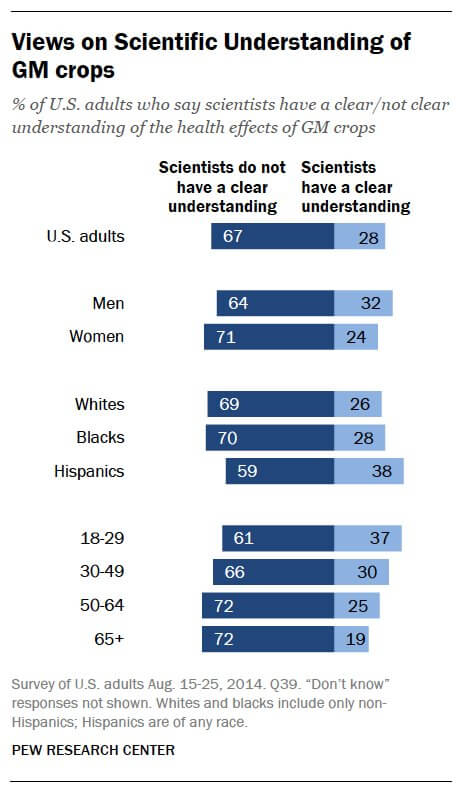 David Despain, M.Sc., is a science and health journalist based in Gilbert, Ariz. He is also director and managing editor of Bionomics and Genetic Literacy Project. Follow @daviddespain on Twitter.