Is there a genetic switch that causes ALS (Lou Gehrig’s disease)?

In the summer of 2014, the Ice Bucket Challenge, designed to increase the public’s awareness of amyotrophic lateral sclerosis (ALS), was started. It became a social media sensation. 440 million viewers watched videos 10 billion times of ice bucket participants. It has led to increase awareness about he disease, encouraged the ALS Association to triple its research spending and increased donations. This event will be repeated again in August (#ALSIceBucketChallenge). 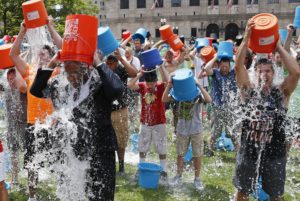 ALS is a neurological disease which affects the neurons that control voluntary muscle in the body. It is usually rapidly progressing, leading to death in an average of two to five years according to the ALS Association. Researchers still don’t know the causes of ALS in about 90 percent of patients, but about 10 percent of cases are thought to be due to heritable genetics.

The new line of research, published in the American Journal of Human Genetics, discussed primarily the gene C9orf72–mutations in this gene can be associated with an unstable DNA sequence that has repeats a sufficient number of times to be associated with the development of ALS. The newly-published research focuses on three-generations’ worth of a single family and focused in on the C9orf72 gene and these repeats. Interestingly, neither the grandparents nor the parents of the third generation in the study had developed ALS, yet four of the five offspring in the third generation had developed the disease.

The father in the study had 70 unmethylated repeats, and the affected children had a mutation that grew to over 1,000 methylated repeats. So part of the story developed by the researchers is that somewhere between the over- and under-expression of the C9orf72 gene and the 70 to 1,000 repeats, the father did not develop ALS and the adult children developed ALS. The suggestion is that there is some threshold where the genetic switch is flipped to such an extent that the disease materializes.

The transport of a protein known as TDP-43 is performed improperly in those who have ALS, and finding accumulation of TDP-43 in the intracellular fluid is a hallmark of ALS among other neural proteinopathies. TDP-43 (transactive response DNA-binding protein, 43 kiloDaltons — a measure of its size) has been known to be related to ALS and frontotemporal dementia proteinopathies for some time, but the suspected causal factor of the gene C9orf72 and associated gene expansion repeats are important new factors in the study of ALS. The study authors noted:

“The suggested C9orf72-related disease mechanisms are complex… individuals with expansions show ~50% fewer C9orf72 transcripts, possibly as a result of epigenetic alterations…Moreover, a higher degree of methylation was associated with familial ALS and shorter disease duration.”

Interestingly, the researchers have suggested that the epigenetic methylation changes “of the repeat expansion is a protective mechanism to minimize the production of toxic RNA and dipeptides, which lead to collateral damage,” and similarly, methylations were associated with decreased expression of the C9orf72 gene.

ALS typically isn’t associated with cognitive impair, and the famous example of ALS sufferer Stephen Hawking is often used to show that even though he has become physically debilitated, his mind still continues to function at an incredibly high level. There are however reports of memory impairment and depression resulting in some patients with ALS.

The difficult part in assessing the causality of depression or memory problems is that significant physical and psychological stress (as would be present in developing ALS) can both contribute to depression as well as memory impairment. Or there could even be a causal chain where the stress of the disease leads to depression, which is itself a well-known precursor or comorbidity of memory issues (or vice-versa where the disease robs the patient of cognitive resources due to stress and anxiety, and the disease and memory impairment lead to depression).

The next line of inquiry for this research would be to bolster the findings by looking at several generations of additional families to see how strongly these findings hold. This will also give researchers more data in the form of number of DNA repeats which are – or are not – associated with the presence or absence of ALS. This will allow us to identify a predictive range of repeats that would likely be related to developing ALS – at least some cases.

The riddle is not yet solved, but understanding the underlying genetic and biological mechanisms that are involved give us a chance to better prevent or treat the disease, as well as to improve diagnostics to give the public better opportunities to know how to face this disease.

Ben Locwin, Ph.D., M.B.A., M.S. is a contributor to the Genetic Literacy Project and is an author of a wide variety of scientific articles for books and magazines. He has worked in neuroscience and public health, and is a consultant for a many industries including statistical analysis, food and nutrition, pharmaceutical, psychological, and academic. Follow him at @BenLocwin.