Communicating science to lay people is hard to do well. Nassim Taleb should be very good at it, based on his book sales and enormous opinion of his own skills. But rather than encouraging a healthy discussion about science, Taleb’s declared all-out war on the people who disagree with him. His strategy is to prevent conversations by insulting people who question him, and encouraging his followers to join in. This strategy doesn’t help communicate science, resolve legitimate questions, or even address the supposedly evil motives of his critics. It just feels good. Nassim Taleb has chosen self-gratification over real engagement.

Taleb has been kicking up the dust lately on Facebook and Twitter, encouraging his readers to not even listen to people who disagree with his beliefs about GMOs. Recently he has attacked an agricultural scientist I follow, Kevin Folta, who used $25,000 of money from Monsanto’s to fund outreach– a serious crime in Taleb’s eyes. 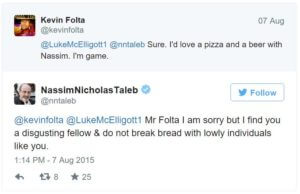 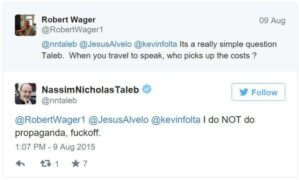 Taleb’s not going to take my advice on this. But you can protect science communication and just plain old civility. If you agree with Taleb’s overall position regarding GMOs, have a conversation about it. Don’t scream “shill!” to escape the conversation. Discuss the evidence. If you can’t have that conversation, you aren’t in a position to make an informed decision.