Designer viruses and precision medicine: New findings for the future of gene therapies

Precision medicine and personalized medicine have at their heart the promise of targeting diseases with specialized therapies specific to certain types of people with certain genotypes. Also, these therapies are designed to target the genotype in such a way that there are fewer adverse events and side effects because they’re not being broadly applied across the population. Certain individuals are more sensitive than others to certain drug treatments, and to apply the same treatment to everyone is like a painter with one color in his or her palette.

Seen in this figure below, the ultimate panacea for precision and personalized medicine is to contend with the two major goals: To address only the target (disease, gene, pathogen) while being tailored to patients in such a way that they minimize adverse effects based on one’s genome. 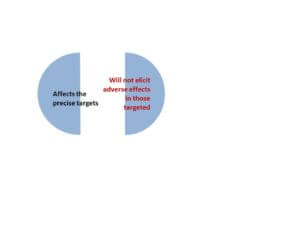 Part of building up this armamentarium for the future of personalized medicine has been the use of viruses to promote gene therapy. Adeno-associated viruses (AAV) have been used for targeted human gene therapies, and tobacco mosaic viruses (TMV) have been used in transgenic plants, including the ZMapp experimental drug therapy for Ebola, widely reported on in 2014. Broadly speaking, viral vectors are designed to have a virus introduced into a cell which inserts genetic material into the nucleus to then make the cell produce new protein which has been coded for. 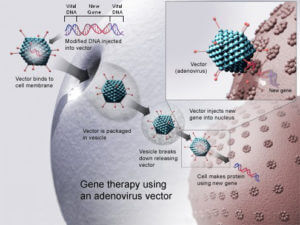 One of the difficulties in using this viral vectoring for genetic therapies is that the immune system can mount a response to viruses that have been seen before; when this happens, immunity can destroy the viral vector before it’s able to perform its work within cells.

In new research by members of Harvard Stem Cell Institute at Massachusetts Eye and Ear, the team was able to use computer modeling (in silico modeling) to work backwards through ancestral lineages of adeno-associated viruses to find a common ancestor candidate for AAV 1, 2, 8, and 9, named Anc80 (see ancestrality in the figure from the research itself). 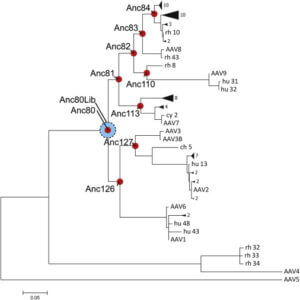 This work has allowed the researchers to understand how AAV has evolved over time, and to learn more about how the viral structure is built. Senior author Luk Vandenberghe noted “From this knowledge, we hope to design next-generation viruses for use as vectors in gene therapy.” Using what has been learned can allow scientists to engineer more benign and unrecognizable viruses, which will not trigger the same immune response as some viral vectors which are derived from widely-circulating viruses. The level of targeting precision — and hence better precision medicine — can be enhanced as well, as we learn more about different and novel candidate viral vectors. When the candidate designed ancestor virus, Anc80, was injected into mice, it was able to target liver, muscle, and retina cells without creating observed toxic effects.

The ability to target specific cells using designer viruses which can be tailored to increase gene transfer or reduce immune recognition represents to of the most important challenges facing continuous progress in the direction of personalized and precision medicine with gene therapy.

Ben Locwin, Ph.D., M.B.A., M.S. is a contributor to the Genetic Literacy Project and is an author of a wide variety of scientific articles for books and magazines. He is a consultant for many industries including genetics, vaccines, pharmaceutical, psychological, and academic. Follow him at @BenLocwin.