GMOs in US vs. EU: United States regulates usage while Europe fears risks of technology

While the U.S. and the EU take opposing approaches in regulating GM foods, they use similar types of scientific data to reach decisions about approving products.

In the U.S., the same regulations apply to GM and conventional foods because despite the different processes used to make them, the final products are considered to be similar.

As illustrated in Figure 1, the regulation of GM foods in the U.S. is enacted by multiple agencies.  Regulations are based on the GM foods and how they are used, rather than the genetic engineering technologies that produced them. Additionally, it is relatively easy for companies to receive exemptions from the regulatory processes. 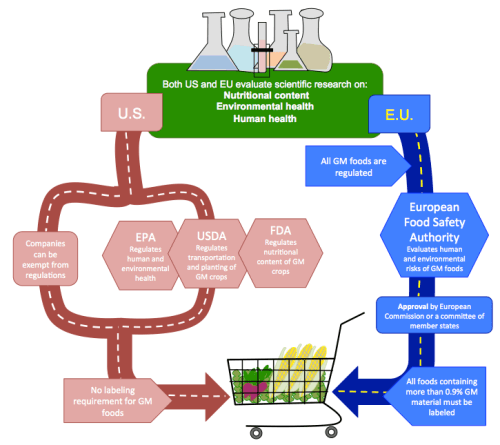 Compared to the U.S., the EU imposes strict regulations on GM foods. The EU’s tradition of risk-averse regulation means the precautionary principle became the central tenet for GM food regulation: since potential risks of GM foods are not completely known, regulatory decisions err on the side of caution and require a high burden of proof. All GM foods are regulated because they are made with processes different from those used to produce conventional foods.

The outcomes of the U.S. and EU regulatory regimes are distinct, with higher rates of GM food approval and use in the U.S. Despite the differences in their two regulatory approaches, however, the U.S. and EU evaluate similar types of scientific data and generally reach the same conclusions about the safety of GM foods.

Editor’s Note: This post is part of a series on GMOs in a special edition of the online magazine “Signal to Noise”, produced by Science in the News. You can read the entire series here: Signal to Noise Special Edition: GMOs and Our Food