Another bungled correlation study on bee health dangers of neonics

What would you say about a government study claiming to show a connection between coffee and cancer — but it didn’t take into account that most of its study subjects were chain-smoking uranium miners who preferred to sunbathe without sunscreen?

You’d probably think it wasn’t very credible; or maybe it was a story on the satirical news site The Onion.

But that’s little different from a recent report issued by the usually reliable Food and Environment Research Agency (FERA) in Britain. The study, “Evidence for pollinator cost and farming benefits of neonicotinoid seed coatings on oilseed rape,” published last summer in Scientific Reports, concluded that coating oilseed rape crop seeds with neonicotinoids (aka neonics), used as a pesticide, resulted in excessive bee colony losses—what the study called a “pollinator cost”.

First off, note that this was a correlation study, not a determination of cause and effect. Many studies note correlation “links” but further exploration usually confirms that other factors, often not measured or understood, caused the problem. We know for example that the rise in numbers of people eating organic food is highly correlated with increases in obesity and autism. In other words, be cautious about putting too much weight on correlation studies.

But there are other more fundamental concerns about this report. Its conclusions are strikingly at odds with real world experience in which we have extensive data accumulated over many years. In western Canada, where 100 percent of the canola (essentially equivalent to oilseed rape) seeds are treated with neonics, bees are thriving.

And more to the point, the association study conflicts directly with large-scale field studies, which have found that bees foraging on neonic-treated crops suffer no observable adverse effects. FERA admitted as much, acknowledging in the report that no study based on real-world experience has ever been able to link the use of neonics with bee declines.

Not surprisingly, this correlation study was widely reported. “Pesticides linked to bee decline for first time in a countrywide field study,” the Guardian headlined. The headlines were turned into scare memes and promoted heavily by activists who have been campaigning against neonics and celebrate each new study that contains even a sliver of bad news about bees as a plus for its cause. Their hyperfocus on this report is understandable, as they’ve had a rough year, as recent study after study has challenged the dogma that neonics are a primary driver of bee health problems. This FERA study, they claimed for the umpteenth time, was a game changer.

Note that this wasn’t based on field research as some activists sites claim. It was an epidemiological review that simply crunched numbers to try to find a correlation. But what the number crunchers left out is mind-boggling. One has to wade more than halfway into the text to uncover this all-important disclaimer:

Our data were not derived from a controlled experiment and so may be influenced by confounding factors not accounted for in our models, such as honey bee pests. However, controlled studies have severe logistical constraints because the required manipulations focus at the landscape scale.

That’s a starting statement, bordering on a confession that renders this research all but useless. Essentially what they are saying boils down to this: a rigorous study would have been really hard to do, so we just did what was easiest, and ignored the full picture. That’s confidence-building science?

No controls for bee pests

To translate what these scientists actually studied: they did not factor in what the European Commission (and United States government researchers) maintain are the main drivers of bee deaths: Varroa mites and the diseases it helps enable. The researchers allude to this: 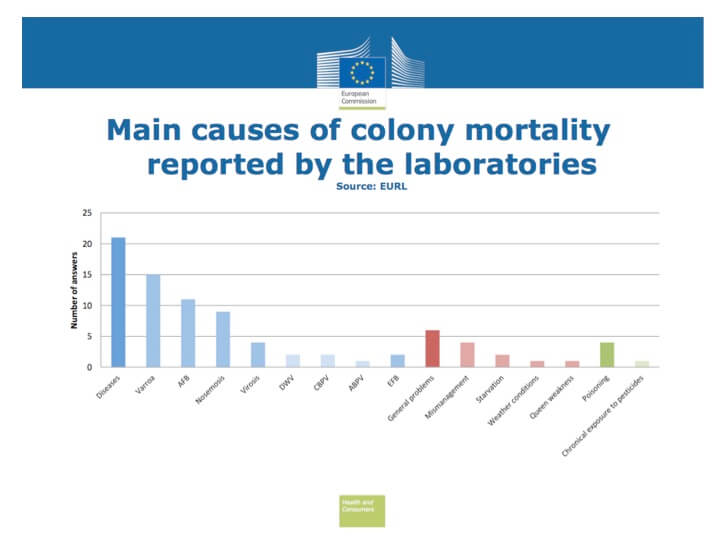 Whilst the ectoparasitic mite Varroa destructor and its associated viruses have been shown to cause honey bee colony losses, no records of these or any other honey bee pests and diseases were gathered systematically for the period of interest.

In other words: we didn’t have the information about Varroa and the myriad other bee diseases readily available, so we just decided to pretend these problems — the most important ones — don’t exist. But British beekeepers can’t afford to pretend; they know bee declines are much more likely to come from Varroa infestations hitting local farms. During the period explored in the FERA study, the British Beekeepers Association explained the seriousness of the challenge they faced from this menace:

Colony losses due to varroa infestation have increased since 2001. This is a result of the mites developing resistance to available pyrethroid varroacides and the limited alternative treatments.

The correlation study also appears to be an attempt to support the narrative of a ‘crisis’ that doesn’t exist. Bee health is an ongoing, challenging issue. But in overall numbers, bees aren’t declining; not worldwide, not in Europe, not in Canada, not in the United States. Wherever you look, honey bee hive numbers have been stable or growing since neonics came into widespread use. That’s not to say there are not increased stressors on bees and legitimate concerns about how commercial bee operations manage their hives. But those are different, although related issues.

There are some worthwhile findings from the report that comport with real world observations — and common sense — although these elements have largely been ignored by the media. The study showed that neonic seed treatments work in fighting off dangerous bugs to boost yield and profitability while reducing dependence on insecticide sprays:

We combined pesticide usage and yield observations from over 76,000 ha of OSR over five replicate years to provide the first evidence that farmers who used imidacloprid seed coatings consistently reduced the number of foliar insecticide sprays used in the autumn, but not during flowering (Fig. 4). Our observations fit well with the known efficacy of such seed coatings against cabbage stem flea beetle (up to four to five weeks) and peach potato aphid (up to 10 weeks), and demonstrate for the first time that farmers do alter their foliar pesticide application practices as a result of using imidacloprid seed coatings.

By selecting this more advanced pesticide—the one that activists love to hate—you end up using less pesticides overall. Are advocacy groups cynically ignoring the well-accepted fact that neonics decrease the overall use of pesticides? Are they, in effect, advocating for increased pesticide use?

From a scientific standpoint, the FERA’s conclusion that neonics forestall crop damage isn’t exactly groundbreaking. It’s common knowledge amongst farmers, which is one reason a number of European countries have requested derogations from the European Union’s ban on neonics instituted almost two years ago. In July, Britain claimed its exemption after crops began to be overwhelmed with flea beetles. Finland, Romania, Bulgaria, Estonia and Denmark have done likewise.

So, its unfortunate that while elements of the study might have contributed to a more nuanced understanding of the debate on neonics, it was the shoddy bee-decline correlation that grabbed the headlines, supplying fodder for the anti-pesticide campaigners.

Jon Entine, executive director of the Genetic Literacy Project, is a Senior Fellow at the World Food Center‘s Institute for Food and Agricultural Literacy, University of California-Davis. Follow @JonEntine on Twitter

Viewpoint: How Canada corralled COVID while the US failed