David Warmflash | November 17, 2015
This article or excerpt is included in the GLP’s daily curated selection of ideologically diverse news, opinion and analysis of biotechnology innovation.

If you want a clue as to whether somebody’s argument about genetics is likely not to be based in science, just look for the word “natural” to be repeated several times in their rationale. It happens in the case of vaccine-fearers, it happens with religious groups who reject commonly used, highly effective treatments like blood transfusions, it happens with white supremacists who reject interracial mixing, and it happens — as surely as the Earth orbits the Sun — with the activists who reject food grown from genetically-modified (GM) seeds because the ‘violate nature’.

In fact, there is even an anti-GMO website — Global Alliance for the Rights of Nature — whose whole premise is that Nature is a guided intelligence and human tinkering (since humans, they believe, are not of Nature) is ipso facto dangerous — of course unless its human tinkering that suits their ideology, such as blowing holes in the chromosomes of plant seeds using chemicals or radiation — mutagenesis — the source of organic Ruby Red grapefruits and the best organic Italian durum wheat and about 2,500 crops and plants, most of which can and are sold as organic. It’s faulty thinking, based on a belief that rejects anything that does not conform to an individual’s romantic notion of what is natural. To demonstrate their ire, this website is sponsoring a “Rights of Nature” tribunal in Paris to put on ‘public trial’ anyone brazen enough to support agricultural biotechnology. 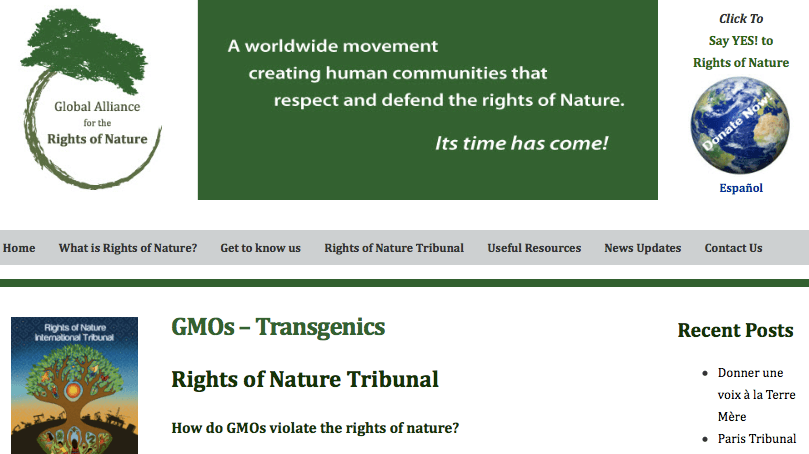 What’s most illogical with the “natural wing” of the anti-GMO activist community is not that it wants to be cautious about biotechnology. It’s not that it rejects the consensus evidence of professional organizations like the American Association for the Advancement of Science, the European Commission and 268 other global organizations that have endorsed the safety of genetic modification. What is most illogical is that anti-GMO groups embrace less precise types of human tinkering, hybridization in particular (also called grafting), while rejecting techniques that involve far less human intervention.

Unintentionally, humans have been hybridizing plants for 11,000 years or so. With the advent of domesticated agriculture, our ancestors began mixing the genomes of different plant varieties to create new varieties never found in nature. That changed what’s called the gene pool. Through artificial, human-guided selection, our ancestors created novel crops from old plants, just as they created dogs from wolves.

Over the centuries, people figured out that they could speed up the process by splicing plants together intentionally — in rudimentary laboratories. The process was made more efficient with the discoveries of Gregor Mendel, the 19th century monk, the father of genetics. This is biology at the high school level.

“But hybridization is not genetic modification!,” one woman commented to me on a Facebook thread following a comment that I had made explaining that our ancestors have been modifying plants genetically since Neolithic times.

I started to tell her that new plants made this way are GMOs. Indeed, they’re more GMO than the GMOs that are made with modern genetic engineering, since during hybridization numerous genes — hundreds or thousands — are moved among organisms, as opposed to just one or two very carefully selected genes. In the words of technology commentator Robert X. Cringley on the PBS program POV, “Hybridization is just crude genetic engineering”.

Crude means that tinkerers–farmers or scientists — don’t know which genes you’re moving, nor what they do. That may sound dangerous, but then nature does it all the time. All of life is genetically modified. That’s why we exist. Since the emergence of the the ribosome and the Genetic Code in the first cells, life forms have been genetically modified, for billions of years by nature, and then for the last eleven thousand years, a few species by intervention of our ancestors.

It also happens to our food, in and by nature. The first genetically modified crop wasn’t made by a megacorporation. Nope. Nature did it — at least 8,000 years ago. Bacteria in the soil were the engineers, just as many GMO seeds are created today using harmless Agrobacterium. And the microbe’s handiwork is present in sweet potatoes all around the world today.

“People have been eating a GMO for thousands of years without knowing it,” said virologist Jan Kreuze with the International Potato Center in Lima, Peru, the lead author in a study published earlier this year in the Proceedings of the National Academy of Sciences. 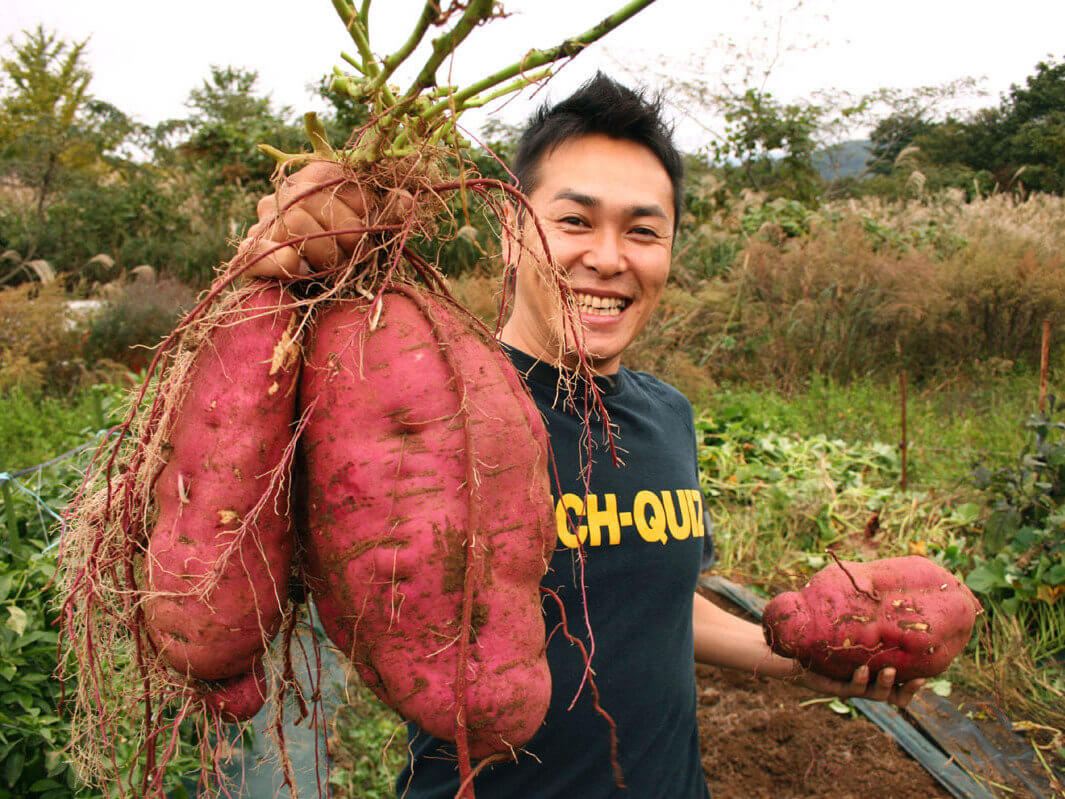 The woman on Facebook is not an isolated ccomplainer. Rather, she was repeating a typical anti-GMO mantra, which always incorporates the word “natural”, as in this post from an anti-biotech site called Mother Earth News. It attempts to draw a distinction between hybridization and true “GMOs”:

The term “hybrid,” which you’ll often see in seed catalogs, refers to a plant variety developed through a specific, controlled cross of two parent plants. Usually, the parents are naturally compatible varieties within the same species. Unlike hybrids, which are developed in the field using natural, low-tech methods, GM varieties are created in a lab using highly complex technology, such as gene splicing. These high-tech GM varieties can include genes from several species — a phenomenon that almost never occurs in nature.

Basically, the writer tried to distinguish between hybridization and GM technology based on the level of technology. But “naturally compatible” is a completely meaningless phrase. By “compatible”, the writer means alike, members of the same kind — eerily similar to what white supremacists of the American Civil War and Jim Crow eras meant when they insisted that blacks and whites were not compatible to marry and mate — in other words to exchange genetic material. Anti-GMO activists also employ the term “foreign genes”, which by their definition means genes from other kingdoms of domains of life, rather than merely similar species within the same plant genome. This concept is particularly irrational if we consider findings of genomic studies in recent years showing that plants, humans, indeed all life forms on Earth, contain genetic sequences from throughout Earth’s tree of life.

As GLP director Jon Entine noted recently, life on Earth is a web of genes that are constantly exchanged between organisms. It’s due to horizontal gene transfer. Our genome is not a fortress, protected by powerful walls or forcefields from contamination by “foreign DNA”. It’s full of sequences — so-called foreign genes — from millions of other species. We have bacterial genes, protozoal genes, dog genes, plant genes, you name it.

The so-called human genes in the cell nucleus constitutes a minority of the entire genome. Bits of DNA slip easily through the nuclear membrane from outside, because the membrane is NOT a fortress. It’s highly permeable and that’s why humans are no more immune to horizontal gene transfer than any other life forms on Earth are immune to it.

There’s nothing wrong with having a mix of genes from foreign organisms in our genomes. For the record, we share 24 percent of DNA sequences with wine grapes, 44 percent from honey bees, and 73 percent from zebra fish. The only thing that makes a gene human or plant is the fact that the human or plant shares the gene with other humans or plants. Whatever the gene codes for is the same gene product whether in a wheat plant, bacterium, or a mushroom, because the gene’s message is decoded by ribosomes that use the same Genetic Code. The very idea of “foreign genes” is foreign to the reality of how biology works.

While the mainstream anti-GMO activist don’t object to hybridization — if they did, there would be little left to eat — there actually are some legitimate concerns. Historically, the existence of religious prohibitions against grafting and mixing together just about anything suggests that there have always been people with disturbed about fusing life forms or their products. To this day, Orthodox Jews will not wear wool and linen together because of laws in the Torah stemming from agricultural practices in Iron Age Israel. They also won’t buy food unless it’s labeled with a hechsher, the seal of approval of kosher purity. Sound familiar?

Beyond cultural practices, because hybridization IS genetic modification, perhaps there could be some dangers. Researchers in China, published a study in the online journal PLOS ONE two years ago showing that grafting between plant species (species that anti-GMO activists consider naturally compatible) can cause heritable changes in DNA methylation in certain plants. Methylation is a process vital to gene regulation — turning genes on and off. This is not to say that there should be health concerns, but the study does illustrate a point that hybridization is not just mixing of genes, but is a process with potentially major consequences on cell genetics. It’s serious modification of a plant’s genome — no more or less so, necessarily, then precise genetic engineering.

And that makes embracing hybridization with exchanges of multiple, unknown genes, while rejecting carefully controlled transfer of individual genes with specific, traits illogical.