This is the third and final post in a series examining the topic of GMOs and patents.

This paragraph from the previous post in the series must be repeated here: “Most of this article will focus on Monsanto, primarily because it has been the target of many activist efforts (I have yet to see a March Against Syngenta). As you may know, the commonly repeated myth is that Monsanto has taken hundreds of farmers to court for inadvertent contamination or for replanting GE seeds. 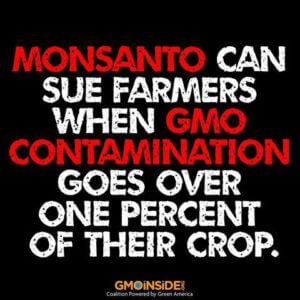 According to the company’s website, there have been ‘147 lawsuits filed since 1997 in the United States [and none for inadvertent contamination]. This averages about 8 per year for the past 18 years. To date, only nine cases have gone through full trial. In every one of these instances, the jury or court decided in our favor.’”

To determine if any of these cases was unfairly brought against a farmer (inadvertent contamination or unknowingly using GE seeds), I would have had to review each of these cases. However, I came across a story that had done all the work for me: a 2013 court case, known as OSGATA vs Monsanto.

Most of the information from this section is from the United States Court of Appeals for the Federal Circuit court documents.

In 2013, a coalition of organic farmers, seed distributors and anti-GMO organizations, including names such as the Center for Food Safety, Food Democracy Now!, and the Cornucopia Institute, joined forces and took Monsanto to court to invalidate 23 of the company’s patents, particularly surrounding Round-Up Ready seeds. The case is known as OSGATA v Monsanto. The case’s background states that these groups do not want to use/sell transgenic seeds or glyphosate. However, their concern is that if they do become contaminated they could “be accused of patent infringement by the company responsible for the transgenic seed that contaminates them”.

The intro to the court document explains that in 2011, Organic seed growers went before a judge in the Southern District of New York asking that the patents be judged “invalid, unenforceable, and not infringed”. They claimed that they had started growing conventional produce since the threat of contamination from GMO was so high. They had to take expensive precautions such as creating a buffer zone, so that they wouldn’t be sued by Monsanto. One grower testified to the fact that the only reason why he grows conventional seeds is the threat of a lawsuit from Monsanto, and if this threat didn’t exist then he would go back to growing organic seeds. So, in April 2011, these growers requested Monsanto to “expressly waive any claim for patent infringement [Monsanto] may ever have against [appellants] and memorialize that waiver by providing a written covenant not to sue.” OSGATA, et al claimed that they felt at risk of being sued by Monsanto if their fields were ever found to be contaminated with Monsanto’s patented GMOs.

At the heart of the issue was the fact that Monsanto’s promise to never sue a farmer whose fields have been (unknowingly) contaminated by their seeds was a statement on the company website. It wasn’t a law. It wasn’t something that they had sworn to under oath. It was just something on their webpage which, at the end of the day, could be false advertising or a PR gimmick. In back-and-forths between lawyers, Monsanto wrote that they have no reason to go after farmers for low level contamination because there’s no financial incentive, and that if the motives of the growers/farmers is true (i.e. that they don’t intend to use/sell transgenic seeds), then their fear of a lawsuit is unreasonable. The judge in the district court threw out the case in 2011 based on the fact that “these circumstances do not amount to a substantial controversy and . . . there has been no injury traceable to defendants”.

The case then went to the United States Court of Appeals for the Federal Circuit, whose court documents are the ones I’m summarizing. The discussion states that it isn’t sufficient to demonstrate that a patent is owned by someone and that there’s a risk of infringement: you have to actually demonstrate that there’s a substantial risk that harm may occur or that they have to go through expenses/costs to mitigate those risks. In other words, the judge asked the organic growers/seed distributors to demonstrate that there was the possibility that they might get sued for inadvertent contamination.

Organic growers/seed distributors (OSGATA) conceded that Monsanto had never threatened to sue them.

However, the court conceded that given the way patent laws are written, even using a small amount of a patented material without authorization could constitute patent infringement. For the purposes of the appeal, the judge proceeded with the ruling based on the assumption that inadvertent contamination, including cross-pollination, was inevitable (the court document clarified that this was an assumption, not a ruling).

The documents state that the whole argument was moot if Monsanto really didn’t intend to sue: the Supreme Court has recognized that a covenant not to sue nullifies a controversy between parties. Since Monsanto had a written policy on their website against inadvertent contamination, the court documents recorded Monsanto’s position on this whole argument. Monsanto and the organic growers agreed that “trace amounts” meant approximately 1 percent contamination. The ruling states that although this was not a covenant not to sue, it had a similar effect and constituted a judicial estoppel, which means that Monsanto could no longer contradict something that’s been established as truth by itself and by the court.

OSGATA stated that Monsanto’s refusal to provide a covenant had a “chilling effect” and that farmers/growers would have to forgo the activities that they would have otherwise liked to pursue. The judge stated that a “chilling effect” wasn’t something tangible, that the appellants needed to have something more specific than that, and that the future harm described was speculative and hypothetical.

The court ruling ends with this statement in the concluding paragraph: “the appellants have alleged no concrete plans or activities to use or sell greater than trace amounts of modified seed, and accordingly fail to show any risk of suit on that basis. The appellants therefore lack an essential element of standing.”

The organic movement considered this case to be a partial victory because they now had in writing that Monsanto would never sue them for inadvertent contamination. But I’m not sure I understand this… I think you’d have to be so paranoid about what Monsanto might do that you’d be willing to incur massive legal fees to make sure that a hypothetical never happens, even when you can’t produce proof that it might.

So how is it that this myth about Monsanto suing farmers still circulates? Based on the movie “David vs Monsanto” described in part two of the series, you could believe that Monsanto plants evidence and works with testing companies to ensure that you your testing is >1 percent. You could believe that the 700 court cases that were settled out of court were against farmers who were inadvertently contaminated, but just didn’t have the money to fight Monsanto in court. You could also believe that all the court cases had judges and witnesses who were paid off by Monsanto.

My perspective on this is that Monsanto is a huge company that has better things to do than to sue the small farmer who inadvertently uses their seeds. From a practical perspective, it would probably represent a greater expense to them in legal fees than what they would recoup through the settlement or a court case. As I described in the last post, even in cases where Monsanto has taken farmers to court for knowingly using Monsanto seeds without an agreement, there have been massive amounts of negative publicity for the company. Imagine the uproar if they took a farmer to court who genuinely had no idea that his/her field was contaminated.

To conclude this series, I have found no evidence that farmers are sued by Monsanto for inadvertent contamination. The lawsuits that I examined were for cases where farmers knowingly and admittedly used Monsanto seeds without licensing contracts. The fact that seeds are patented is not exclusive to GMOs: as outlined in the first post, many other traditionally bred seeds are patented. For some seeds, both genetically engineered and traditionally bred, farmers sign annual contracts with seed developers. However, farmers have many choices and in no way are forced to plant these seeds or sign these contracts.

Layla Katiraee, contributor to the Genetic Literacy Project, holds a PhD in molecular genetics from the University of Toronto and is a senior scientist in product development at a biotech company in California. All opinions and views expressed are her own. Her twitter handle is: @BioChicaGMO.