A series of journal articles published between 2006 and 2015 by an Italian research team led Federico Infascelli, an animal nutrition researcher at the University of Naples, are under fire for allegedly manipulating images and/or fabricating key data, according to Nature magazine. One of the papers published in Food and Nutrition Science, has already been retracted. News reports suggest that three other papers are under review.

The Infrascelli et al. articles have been widely and aggressively promoted by anti-GMO groups. Here are three examples:

What is really mind-boggling to me as a scientist is looking at the slideshow of allegedly manipulated images. They appear to show doctoring of images and, perhaps as troubling, the use of the same image in papers that were published years apart but with captions describing different experiments. I will leave formal judgement on the doctoring of images to the University of Naples, but remain incredulous at the apparent reuse of the same gel in multiple papers.

Anyone that has ever run an agarose gel knows they have unique irregularities that are akin to a fingerprint. Below is a copy of perhaps my favorite irregularity that unintentionally appeared on a Southern Blot transfer that was run by students at the University of California, Davis. It just defies reason that anyone would think such image duplication would go unnoticed, especially given the controversial nature of GMO research. And this really brings into question the veracity of the other data presented in these papers.

The results of these papers never quite made sense when considered in the context of the many other animal feeding studies in the scientific literature. There have been many studies looking at the performance of animals consuming GM feed and the fate of recombinant DNA and protein in the milk, meat and eggs derived from animals that have consumed GM feed. In fact, a list of such studies is maintained by the Federation of Animal Science Societies (FASS). The Council for Agricultural Science and Technology (CAST) has a report on it, as does the European Food Safety Authority (EFSA). Time and time again the findings were that researchers have been unable to detect fragments from naturally occurring plant-based (sin­gle-copy, endogenous) genes in food samples from farm animals.

This was summarized in a table in a chapter by independent German researcher Ralf Einspanier “The fate of transgenic DNA & newly expressed proteins” from a 2013 book by Gerhard Flachowsky entitled “Animal nutrition with transgenic plants.” 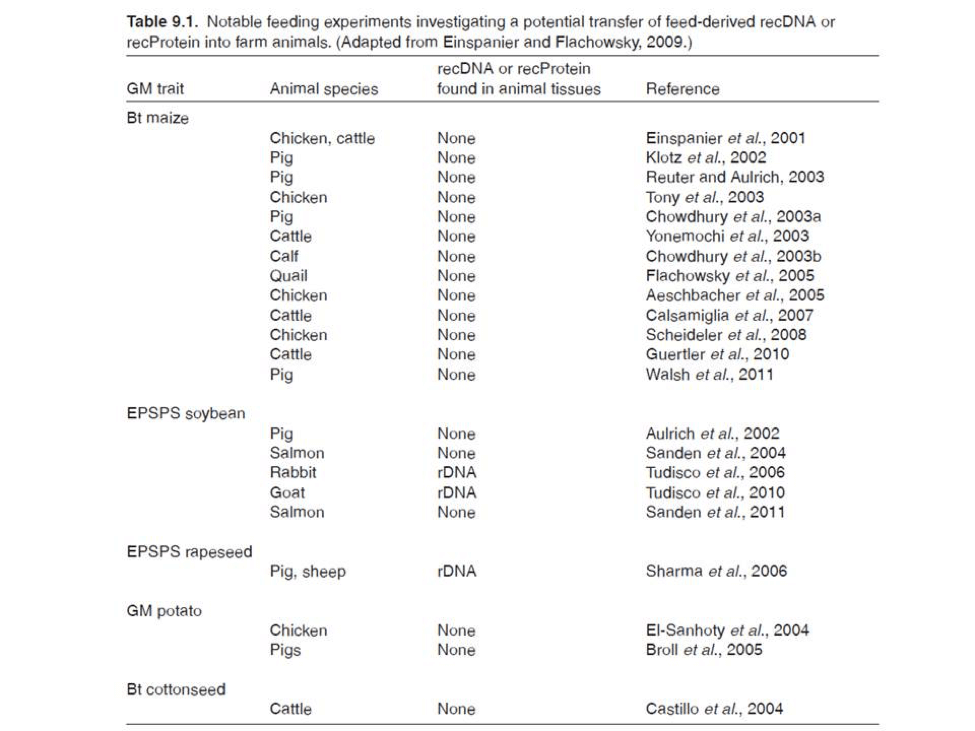 It shows how two of the papers authored by Professor Raffaella Tudisco discussed in the Nature article are outliers relative to many other studies. The authors of the other study that found rDNA in pig muscle (Sharma et al. 2006) concluded:

This study confirms that feed-ingested DNA fragments (endogenous and transgenic) do survive to the terminal GI tract and that uptake into gut epithelial tissues does occur. A very low frequency of transmittance to visceral tissue was confirmed in pigs, but not in sheep. It is recognized that the low copy number of transgenes in GM feeds is a challenge to their detection in tissues, but there was no evidence to suggest that recombinant DNA would be processed in the gut in any manner different from endogenous feed-ingested genetic material.

What is particularly unusual is the finding of recombinant DNA (rDNA) sequences in fresh milk from animals that have consumed GM feed. Multiple studies from around the world have tested extensively for this, and aside from this group only one other study has detected rDNA. In that case it was found in milk from both the control and group receiving GM feed leading the authors to conclude that “the detection of GM DNA in milk can be interpreted as an indicator of fecal or airborne contamination”, rather than from being from the feed consumed by the animal. There are however many, many studies that document no such finding. Bottom line is that there is a lot of data showing no transfer of feed DNA and proteins, whether endogenous or GM, into milk. In this regard, the studies from the Italian group are real outliers.

Why is this important? It is not from a public health standpoint. As the Einspanier (2013) chapter summarized:

However, from a labeling standpoint this is an important issue. Products such as milk, meat, and eggs that are derived from livestock fed transgenic feeds are currently exempt from EU-labeling laws. If rDNA can be detected in the milk, meat, and/or eggs of animal products then this could trigger mandatory labeling of animal products and a sizable proportion of imported EU animal feed is from GM varieties, two points not lost on those opposed to the use of GM in agricultural production systems.

Alison Van Eenennaam, Ph.D. is an animal geneticist and Cooperative Extension specialist in the Department of Animal Science at the University of California, Davis. My Twitter handle: @BioBeef