Why is your memory so bad when you’re hungry?

We all know the rule of thumb for going grocery shopping: Do not do it when you’re hungry; Hunger has an insidious way of making you put items in your shopping cart which otherwise would never have made it there.

Here’s another question about how hunger mechanisms impact how you function: When you’re hungry, have you ever felt like you have a harder time remembering things? There’s a simple biological explanation for this: When your body is priming itself for eating, it doesn’t want to expend unnecessary energy in intensive activities such as thinking.

But hunger in fact has a very subtle linkage with thinking itself, or more accurately, with memory. One of the ‘hunger hormones’ that triggers our appetite and metabolism is called ‘ghrelin,’ and is a stomach-derived hormone. When you go too long without eating, your body produces more ghrelin to stimulate the pursuit of food energy, and after you’ve eaten, ghrelin signals to the central nervous system the presence of nutrients in the digestive tract. Beyond increasing appetite, ghrelin is also known to be associated with regulating metabolism, modulating inflammation, increasing cardiac effectiveness, and increasing the growth hormone, insulin-like growth factor 1. It therefore principally works as an energy consolidation hormone.

Gene sequencing has identified 12 variants (single-nucleotide polymorphisms) in the gene which produces ghrelin, and eight known variants of the gene for the ghrelin receptor (a protein that exists on the target cell that allows ghrelin to ‘dock’ and work its effects). Taken as a suite of metabolic contributors (the things that help regulate our metabolism), there are associations between the genes for ghrelin and its receptor with eating behavior, storage of energy, and insulin resistance. Studies of individuals with genetic variation in ghrelin and its receptor show differences in eating and insulin behavior. This makes logical sense, since ghrelin is unique as a peripheral hormone in its ability to contribute to positive energy balance by stimulating eating and also reducing caloric metabolism.

But there’s more to the story of ghrelin, too: It has been associated with increasing the hedonic (pleasure) value of food and feelings of reward which come from eating. This seems an awful lot like a component of what the neurotransmitter dopamine is responsible for: The pursuit of reward.

Related article:  Why defining 'death' is so much harder than it seems

For any hormone to work, it needs a receptor to trigger. There are ghrelin receptors (GHSR1a) in the brain, but their role is not for metabolic effects, but instead, some researchers argue they exist to augment the formation of memories.

Remarkably, it has been observed by researchers that the ghrelin receptors are functioning in tandem with the dopamine receptors to allow for proper functioning of the hippocampus in memory consolidation, as well as synaptic reorganization and synaptic plasticity. You may have heard ‘neuroplasticity‘ mentioned on commercials for various pieces of brain-training software. It’s simply a term which refers to the brain’s ability to remain cognitively adaptive to new and different mental challenges. It does this by growing neurons and expanding neuronal connections. 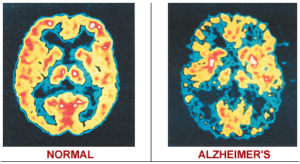 There’s a strong association with certain neurodegenerative disorders and neuronal loss. This loss could potentially be mitigated by ghrelin-based treatments, because neuroplasticity encourages the growth and proliferation of neurons – and thus reverting some of the mechanistic causes of neuronal impairment and loss (such as in Alzheimer’s, Parkinson’s, and stroke). If the ghrelin receptor can be triggered to fine-tune the activity of the dopamine receptor, there’s also a tremendous opportunity for enhancing or inhibiting the function dopamine with fewer side effects than currently-existing therapies.

Ben Locwin, Ph.D., M.B.A., M.S. is a contributor to the Genetic Literacy Project and is an author of a wide variety of scientific articles for books and magazines. He is an expert contact for the American Association of Pharmaceutical Scientists (AAPS), a committee member in the American Statistical Association, and also a consultant for many industries including biological sciences, pharmaceutical, psychological, and academic. Follow him at @BenLocwin.