Epigenetic clinics promise big results, but should public, media be skeptical of claims?

This post originally appeared on HealthNewsReview.org and has been reposted with permission.

“Unlocking genetics to improve health,” ran the all-too-familiar headline of a ­recent news story aired by a local TV station in Ohio.

The story began thus: Patty Adams, a long-haul truck driver, was suffering from wet macular degeneration (“wet MD”), a debilitating chronic eye disease that causes patients to have blurring or loss of vision over time. The treatment required her to receive monthly injections in the eye to slow the progression of the disease. These injections, according to the Mayo Clinic, are considered to be the standard first line of treatment. Patty however, sought an alternative, and found xRMD, a company that promised to solve her problem through “epigenetic testing.”

What followed sounded more like a promotional segment than a news report.

Patty had a cheek swab and some blood samples taken, and met with Dr. George Rozakis, the founder of xRMD, who had this to say:

She had genetic errors which impacted her methylation pathways, and she had really major problems with nutrition, certain foods that she was eating caused a tremendous amount of inflammation in her body.

Based on her results, Dr. Rozakis prescribed her “supplements and bioidentical hormones.” Within six months, Patty claimed to notice a remarkable improvement to the point that her vision was now clear.

After briefly discussing the caveat that Patty’s case might be an outlier and that the treatment–which was not covered by insurance–could be expensive (no specific numbers), the article ends on an improbable anecdote: It suggests Dr. Rozakis has stumbled upon a miracle cure that does more than just treat wet MD. Says Patty:

What’s wrong with this picture?

Patty’s earnest belief that the tests and nutritional supplements worked to cure her and made her thinking sharper is likely to catch the attention of some, if not many reporters.

The problem, however, is that to those watching and reading about such dramatic benefits, it creates hope that could be nothing more than an expensive chase down the rabbit hole.

The major red flag: The story contains little evidence to back up the suggestion that this regimen is a cure for wet MD. What meager scientific information is presented is done so without context from independent experts, and the only caveat noted by the story is at the end of the article.

I researched a bit further to see if there were any studies on this approach and came across a second news segment on the same company by the same reporter. This one followed a similar pattern, except that the patient was seeking a treatment for migraines. Dr. Rozakis, the company’s founder, was once again featured prominently in the coverage–this time claiming that the intervention had a “97% success rate” for migraines based on an internal study of 34 people. There was, however, no further discussion of how the study was done, whether the data was published or even reviewed by outside experts.

There were several other issues that bothered me about this story and the company. But at this point, it’s worth asking: What could’ve been done to make this story better?

The field of epigenetics deals with modifications to DNA that do not involve a change in its sequence (changes to the sequence are mutations). It addresses how those changes can alter the expression of genes, proteins and, in turn, cellular function. Though we know that epigenetics plays an important role in health and disease, relatively little is known about the mechanisms involved and how we can control them. In this case, understanding the state of the field would have made it clear that any bold health claims should be treated with considerable skepticism.

Asking for evidence and independent evaluation 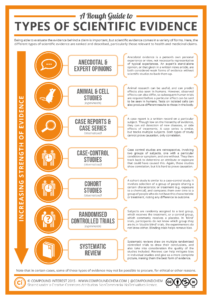 When reporting on health interventions, evidence–and the quality of it–reigns supreme. This infographic (click the image for larger view) provides a useful guide to understanding the hierarchy of scientific evidence and how much weight should be placed on each type of evidence.

Anecdotes and expert opinions not backed up with published evidence, for example, are the least trustworthy. In this news story, though Patty’s experience seems to have been a remarkable success, it by no means reflects the typical efficacy of the intervention. The reporter does note that “more research needs to be done to see if Patty’s case can be repeated in others or if she’s an anomaly.” This point, however, could have been made at the beginning of the story where it gives the caveat a clear emphasis. In general, reporters should avoid anecdotes that feature unrepresentative results, or should balance such cases with others that give a more realistic view of what readers and viewers can expect.

Asking independent experts for opinion on any research study or health claim is a crucial part of accurate reporting. Experts can review data presented and provide information on the strengths and weaknesses of research studies. Interviewing one or more independent experts is a useful way of making sure the story stays true to the evidence. In this report, the author could have reached out to a local university or research institute to find experts willing to comment on the xRMD epigenetic tests and claims.

Another resource is the Genetic Expert News Service (GENeS), a non-profit that provides reporters with access to scientific expertise in genetics and biotechnology. With a database of academic experts from around the country, GENeS can help connect reporters working on a story with the right researchers in a timely manner. (Full disclosure: I’m the Science Media Liaison for GENeS).

Addressing all aspects of the health intervention

It’s important to note that xRMD’s epigenetic tests and treatments could eventually be shown through research studies to provide some benefit to patients. But right now, it appears as though the evidence for that is scant. And while the TV station may have been trying to increase awareness of a potentially new therapy, it’s imperative to bear in mind that people can make life-altering healthcare choices based on the news stories like this one.

Reporters have a responsibility to thoroughly report on the evidence, and provide appropriate context, within the limitations of word counts or on-screen time in video segments. HealthNewsReview.org, for example, provides an excellent list of criteria by which they review news stories and news releases. This includes asking whether the news piece addressed the benefits and risks of the intervention, strength of evidence, conflicts of interest and others. The standards are high, and reporters working on a deadline may not always be able to meet them for all 10 criteria. But most of the criteria can be addressed with minimal space and effort, and any good faith effort to do so is likely to yield an accurate, informative news piece.

This post originally appeared on HealthNewsReview.org and has been reposted with permission.

Arvind Suresh is a science media liaison at the Genetic Expert News Service. He is also a science communicator and a former laboratory biologist. Follow him @suresh_arvind.