Are there environmental and economic benefits to GMO crops? Study claims $150+ billion since ’96

Nicholas Staropoli | June 8, 2016
This article or excerpt is included in the GLP’s daily curated selection of ideologically diverse news, opinion and analysis of biotechnology innovation.

Global benefits for genetically modified crops have reached $150 billion since the crops were first planted, according to a report published by PG Economics LTD.

The report comes on the heels of the National Academies of Sciences, Engineering and Medicine (NASEM) which also noted that genetically modified crops offered substantial economic and environmental benefits. This latest report finds that the majority of the economic benefits for farmers from GM crops were derived from higher yields and extra production, with countries in the developing world seeing the most benefits. The report’s findings are not limited to economics—it also finds substantial environmental benefits from using genetically engineered crops.

PG economics is a UK based advising and consultancy agency for agriculture and other natural resource-based industries. Its clients include both public and private sector entities including biotech companies, farmers organizations, the UK government and the European Commission. This is its 11th report on the global economic and environmental impact of GM crops, which compiled data from 1996 to 2014. The report’s findings are based largely on scientific, economic, and environmental data published in peer-reviewed journals and the report itself will be published in two parts in the peer-reviewed journal GM Crops.

The authors, who have backgrounds in agricultural economics, broke down the data by both country and crop.The overall finding was that globally, farmers who grow GMOs are able to do more on less, while the environmental impact of farming has decreased. 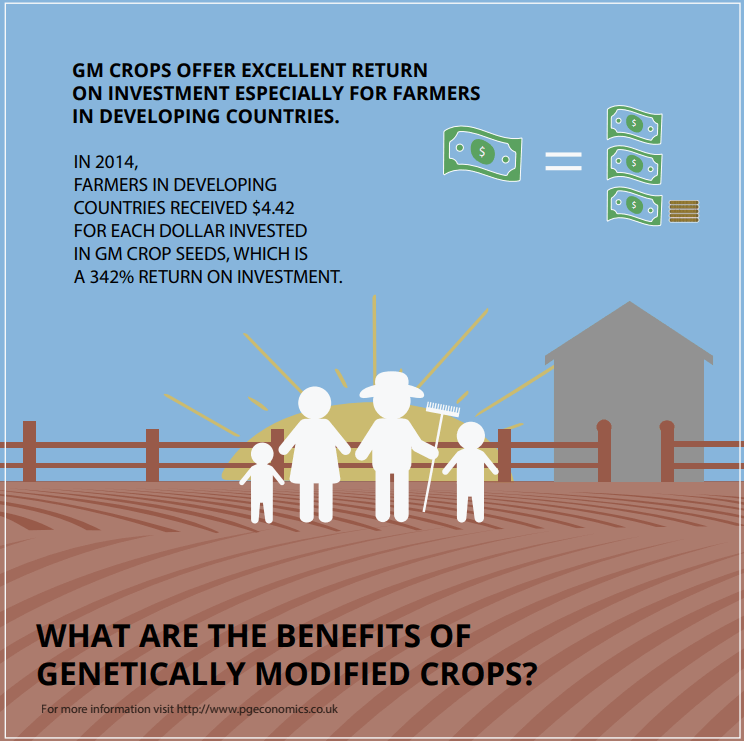 Much of the economic boom resulting from growing genetically engineered crops resulted from insect resistant (IR) crops like those engineered to produce the Bt insecticide—a protein derived from Bacillus thuringiensis, which is also used in organic farming in a topical spray application. From 1996-2014, farmers saw significant increases in yields due to reduced pest infestations from insect resistant cotton and corn. Corn farmers  experienced a 13 percent increase in yields just from IR technology, while cotton farmers experienced 17+ percent yield gains as compared to conventional farming. In 2014 alone, IR genetically engineered corn was responsible for $5.3 billion in added income for farmers globally.

Overall since 1996, farmers in developing countries received $70 billion in additional income from GM crops—largely from benefits derived from IR and HT technologies.

PG Economics didn’t just focus on the benefits to farmers wallets; it also focused on the ecological benefits of the crops. The report outlines two primary ways GM crops, mostly HT and IR ones, have contributed to reductions in greenhouse gas emission.

Farmers have to make fewer passes on their fields to apply chemical insecticides and herbicides, which means they burn less fuel. For example, in Bangladesh conventional farmers sometimes have to spray their brinjal (eggplant) crops twice a week to protect them from the highly damaging fruit and shoot borer—that’s over 180 times a season. IR brinjal may need as little as one application during a season. 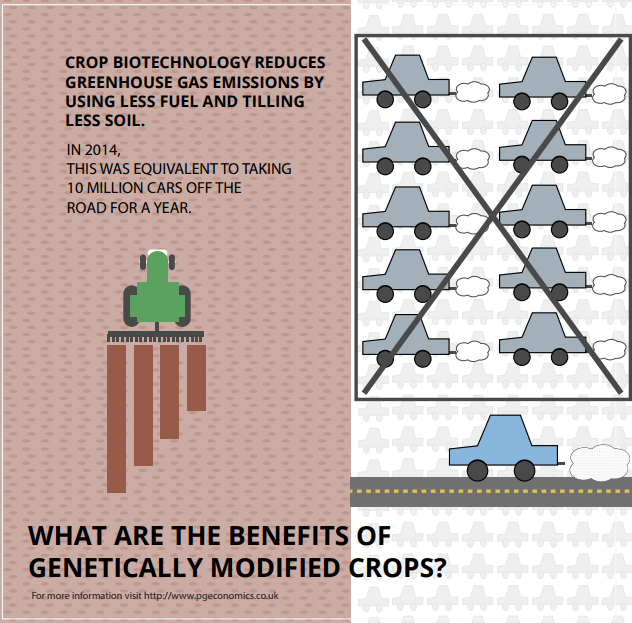 HT crops have helped more farmers adopt ‘no-till’ and ‘reduced-till’ soil conservation practices. Tilling the land involves the turning over soil in order to disrupt weeds growing before planting the season’s crops. Tilling the land requires farmers to run tractors more (and burn more fuel), damages soil and water retention and reduces soil carbon and nitrous oxide sequestration by the soil. Because HT crops have greatly improved weed management, farmers have been able to move away from needing to till their land.

PG Economics reports that in 2014 these GM crops contributed to the reduction of almost 2.4 billion kg in carbon dioxide emission savings. The cultivation of GM crops globally contributed to reduced fuel burning equivalent to removing 1.07 million cars from the road. Additionally, the report estimates that increased carbon sequestration from less tilling of land led to the equivalent of removing approximately 8 million cars from the road. 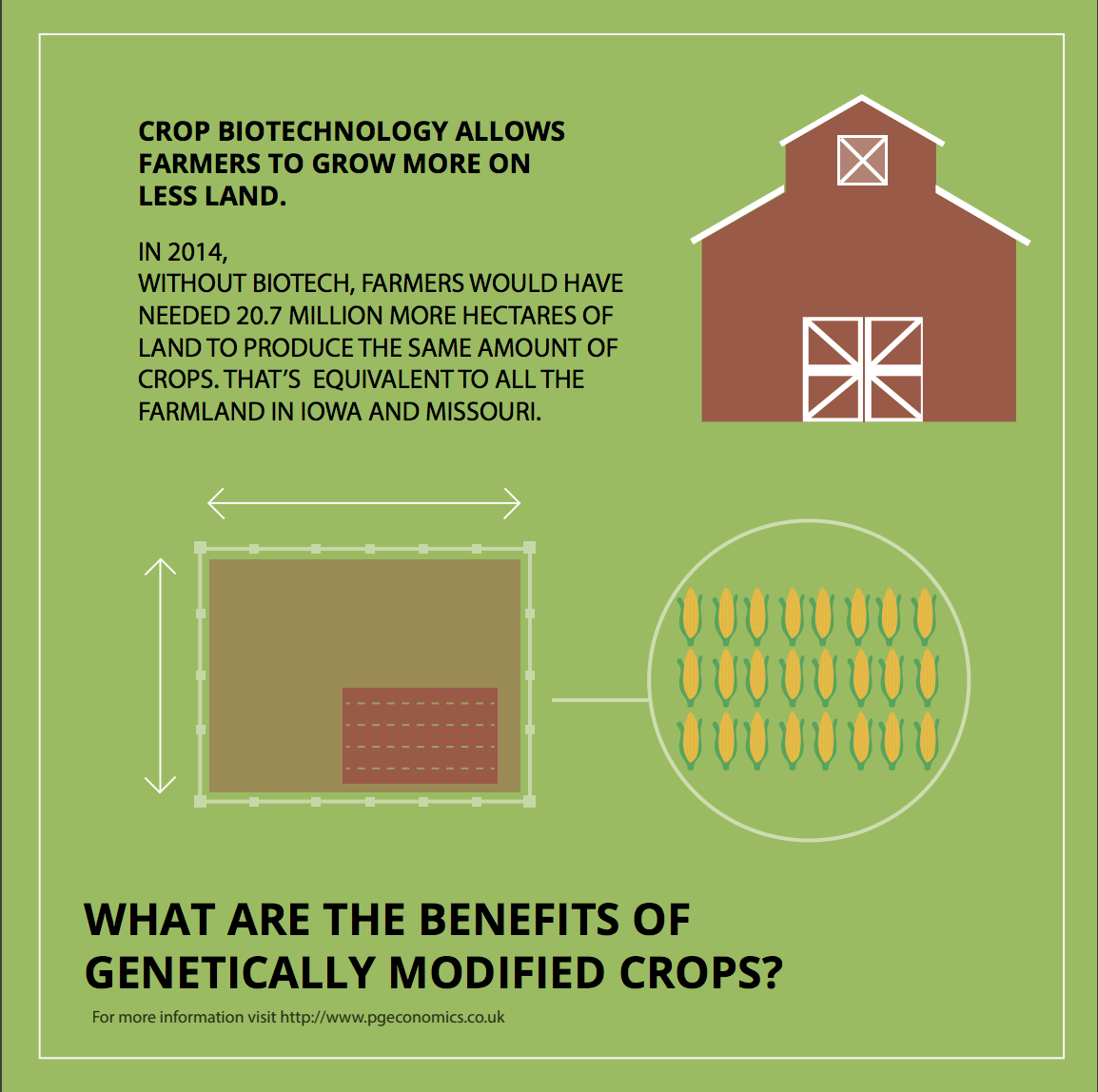 Other positive environmental benefits include a global reduction in pesticide spraying by 581 million kg between 1996 and 2014. Also, GM crops have allowed farmers to grow more on less land:

The study also echoes concerns expressed in the recent National Academies report over the increase in weed resistance from the over reliance on the herbicide glyphosate and the lack of crop and herbicide rotation by farmers. It outlines how farmers are combatting this issue:

In order to address this problem and maintain good levels of weed control, farmers have increasingly adopted a mix of reactive and proactive weed management strategies incorporating a mix of herbicides and other HT crops (in other words using other herbicides with glyphosate rather than solely relying on glyphosate or using HT crops which are tolerant to other herbicides, such as glufosinate). This has added cost to the GM HT production systems compared to several years ago, although relative to the conventional alternative, the GM HT technology continues to offer important economic benefits in 2014.