Kevin Folta | September 13, 2016
This article or excerpt is included in the GLP’s daily curated selection of ideologically diverse news, opinion and analysis of biotechnology innovation.

One year ago, the New York Times published a front-page article dedicated to my defamation.

In a sensationalist move, a well-known reporter took a batch of my personal emails acquired through the Freedom of Information Act (that I surrendered without resistance) and created a story that was designed to destroy my career and bring me personal harm. The emails were originally obtained and distributed by an activist group well funded by corporations with the intent of silencing me, a scientist that simply discusses science.

A year later the story appears again on Alternet, and author Lorraine Chow perpetuates the cherry-picked lies, the distortion and defamation started by USRTK and New York Times’ Eric Lipton.

This is under the “investigations” section, which turns out means cut-and-paste from another website. 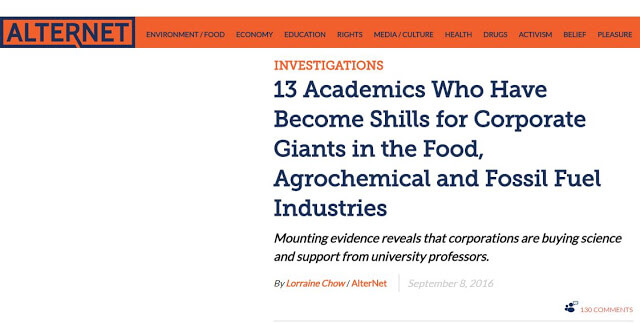 Without any evidence other than the distorted words of trash journalism, Chow continues defamation of my efforts to simply educate scientists and ag professionals on how to discuss the issues of biotechnology.

Of course, the article never states anything I’ve said incorrectly, any rules I’ve broken, or anything I’ve ever done that is unethical or unfair.

It is a first-class ad hominem smear, attacking me for doing my job as an educator.

The facts are the facts.

Chow reiterates the words that made me spit my coffee all over my computer screen last year: that I’m in the “inner circle of corporate consultants…”  OMG.  Really?

She also reiterates the damaging, cherry-picked line that was pulled from over 4,600 (now 27,000) pages of emails…

Yes, that’s what I said, but what did it mean, in context?

As I’ve described previously, the email was not between me and an “executive”.  It was between me and one of their field people, a friend that visited Colorado farmers with me back in September of 2014.

She was appalled by an ad campaign by anti-GM folks in an Oregon paper that was false and misleading about food and science. It was blatant manipulation and lies, false information presented to scare the public.

She told me (and this is all in the emails) that a number of scientists were organizing an Op Ed in the same paper as well as a petition, standing up to misrepresentation of science and agriculture, and denouncing the harmful misinformation.

I was glad to add “sign on” to that list, or even help with the Op Ed.

Yep, that’s it. If Chow bothered to read the emails rather than pile on to the defamation campaign, it would have been rather clear. But that’s not the point. The point is to hurt a scientist that teaches science they find inconveniently incompatible with their beliefs.

If you can’t argue the evidence, smear the scientist.

I could go on about the piece, but the bad information has long been debunked.

Of course, Chuck Benbrook, the guy whose salary and research was all financed by the organic industry, is not mentioned, and he published work using estimates instead of real data that supported his (and the industry’s) desired outcome. He also defends ideological concepts that are not compatible with a scientific consensus.

The good news is that the scientific community is waking up and sees such defamation for what it is—desperate efforts of a dying anti-scientific movement tied to a couple of hack authors cashing a check by confirming the biases of misguided people.

While it is sad to see this kind of effort resurface, it reminds us that all of us in climate, vaccines, evolution and genetic engineering need to continue to raise public awareness about the science—despite the activists that want to stop our messages.

This article originally appeared on his blog as One Year After, the Beating Continues and was reposted here with permission of the author.

Kevin Folta is professor and chairman of the Horticultural Sciences Department at the University of Florida, Gainesville. Dr. Folta researches the functional genomics of small fruit crops, the plant transformation, the genetic basis of flavors, and studies at photomorphogenesis and flowering. He has also written many publications and edited books, most recently was the 2011 Genetics, Genomics, and Breeding of Berries. He is on twitter @kevinfolta