At today’s major geopolitical meetings, like the G8 summit, a certain hair color is becoming much more frequently seen: There is a great deal more faded blonde with streaks of silver than there used to be. These are the gilded grandmas taking politics by storm.

Women like German Chancellor Angela Merkel, managing director of the International Monetary Fund Christine Legarde and, of course, former secretary of state and Democratic Party candidate Hillary Clinton illustrate how our ideas of grandmotherhood have shifted. Beyond grand babies, dirty nappies and baked goods, is politics the next natural role for grandmothers? Maybe so says Liza Mundy writing in The Atlantic:

Evolutionary advantages notwithstanding, modern life seems to be suggesting another possibility for older women. Lately, a group of prominent 60-somethings—Janet Yellen, Elizabeth Warren, Hillary Clinton, and Angela Merkel among them—has begun forging an alternate path: whatever the reason older women were put on this Earth, their example suggests, maybe the time has come for them to run it.

Evolutionary biologists have studied ‘the grandmother hypothesis’ for decades. Women live long past reproductive age in order to help raise their grandchildren by contributing much needed resources, the theory goes. Consequently, these grandmas allow their own daughters and sons to have and support more babies. At the same time, menopause keeps these older women from having more children of their own. Besides humans, only two species of whales have a long life after menopause. Although many female great apes live a long time, they continue to cycle and mate until death.

Essentially, we love our bubbies so much because they helped keep us alive writes Joseph Stromberg in the Smithsonian:

Without grandmothers present, if a mother gives birth and already has a 2-year-old child, the odds of that child surviving are much lower, because unlike other primates, humans aren’t able to feed and take care of themselves immediately after weaning. The mother must devote her time and attention to the new infant at the expense of the older child. But grandmothers can solve this problem by acting as supplementary caregivers.

The grandma hypothesis has gained some traction from studies in non-developed tribes like the Hadza of Tanzania. Anthropologist Kristin Hawkes found that a child’s weight changed with the amount of time and effort his or her mom spent foraging. But if mom had another younger baby, a child’s weight then depended on grandma’s foraging instead. Grandmas make sure non-nursing toddlers survive until they can fend for themselves. Other studies have found little or no effect of grandmas on their grandchildren’s health, however.

Other researches think menopause was driven by men’s mating preferences. Human males seem to have a preference for younger females, although this isn’t the case for other apes. Simulating this preference in a computer model of mating leads to the development of fertility drop off for women about 20 years before the end of their average lifespan. Greater survival of grandchildren might just be a happy, coincidental consequence of dirty old man syndrome.

Related article:  Our ancestors may have evolved the ability to talk 27 million years earlier than we thought 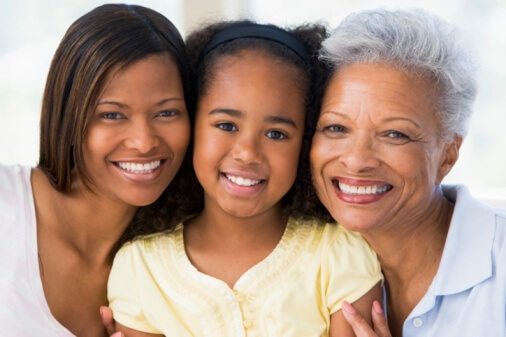 However, the grandmother hypothesis is backed up by research into other species, specifically killer wales. Female orcas breed from ages 12 to 40 but often live until their 90s. Those last 50 years of life they continue to live in pods made up of their children, grandchildren and so on. These grand dames often lead the pack. That is especially true in times when salmon is scarce.

What happens to the male orcas? They die off right about the time they stop reproducing, although that’s a chicken or egg case. Male humans, on the other hand, have relatively the same lifespan as their female counterparts and yet keep on reproducing. Although human testosterone levels drop with age, men are capable of fathering children into their 90s.

Of course when we look at individual post reproductive women, rather than the entire population, our considerations change. Today, the roles of grandmother’s have vastly expanded beyond care taking for their grandchildren. They bake cookies, run banks and everything in between. They also escape some of the cultural biases that plague younger women in business and politics, Mundy explains. While younger working women are seen as competent, they’re also judged as less warm, conversely young stay-at-home mothers are seen as warm but not competent in regards to the working world. Mundy writes:

People may feel more comfortable with ambitious older women than with ambitious younger ones… Certainly Clinton’s feminism and ambition had contributed to her image problems. Might she now be in a window—call it elderliness— when she can get credit for warmth without losing her reputation for competence? Being a grandmother could help.

It certainly looks like Clinton might decide to take advantage of the granny bump by personalizing herself via grandmas everywhere and the support and nurturing they represent. Yesterday, she tweeted, ‘Everything we need to do in our country really starts with how we treat our children.’ And she’s thrown around the hashtag #GrandmothersKnowBest. Institutional knowledge and the grandma glow might be a winning combination.

Meredith Knight is a contributor to the human genetics section for Genetic Literacy Project and a freelance science and health writer in Austin, Texas. Follow her  @meremereknight.