How epigenetics, our gut microbiome and the environment interact to change our lives

There’s been increasing media coverage recently harkening back to Lamarck and inheritance of genetic code that changes in response to the environment (epigenetics).

”Lamarckism” as it came to be called was eschewed for more than a hundred years after its initial proposition because it was thought that genes were static (this reminds me of how Einstein originally developed a model which required an expanding universe, then he added a coefficient (the ‘Cosmological Constant’) to return its behavior to a static state, which later in hindsight was found to be wrong). Now it appears Lamarck while overstating the plasticity of genes, was on to something.

Epigenetics suggests that our genes are constantly in a state of flux, exposed and changing in response to environmental factors. But are these changes indeed heritable? Currently, there isn’t yet consensus that environment, epigenetics, and inheritance intersect or a valid theory for how genes behave in organisms. But now that Lamarckism is back in the public’s vernacular there will be countless studies performed to support or refute the thesis. 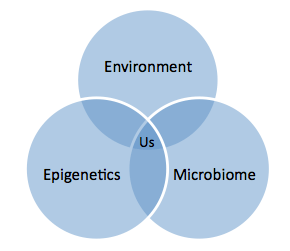 Research presented at the American Association for the Advancement of Science 2014 conference supported some conjecture that epigenetics and some form of heritability are in fact linked. That suggests that much of our lives and life trajectories could, in fact, reflect a sensitive interplay between our environment, genes (epigenetics) and microbiome, as in illustrated in the Venn diagram, in which the intersection of all of these factors is, quite simply, ‘us.’

The proposed Venn of the interplay of our environment, adaptable genes, and microbiome. At the center intersection: Us.

We are influenced by external factors (sunlight, environmental toxins, stress, temperature, etc.), all of which can, to varying degrees, alter our genes. I’ve already explained in another article how something as simple as grapefruit can downregulate (inhibit the activity of) enzymes produced by our genes, making it more likely that the external environment will interact with our body; grapefruits interact with more than 90 drugs because of this effect. It’s also been shown that the ultraviolet part of the spectrum in sunlight causes physical changes in cellular DNA, which can lead to skin cancer. 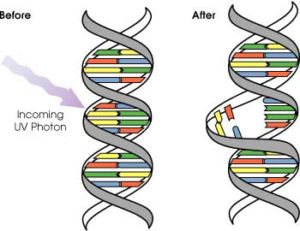 We also know of chemicals and drugs that have teratogenic (can disturb the development of an embryo or fetus) properties. A Lancet study from 2012 showed that 510,000 deaths occurred worldwide as a result of congenital disorders. Therefore, we know of many external mechanisms and their impact on our body, potentially through epigenetic means. The penultimate forerunner of epigenetics is the Hygiene Hypothesis, which states that a lack of early exposure to foreign bodies (bacteria, viruses, parasites, allergens, etc.) is associated with a dysregulated (i.e., not functioning normally) immune system.

News coverage has flirted with the topic of digestive microbiome (euphemistically called ‘gut health’ or similar). What I read is often misquoted from the research literature, ‘extrapolated’ and generalized beyond the study data and littered with anecdotes. What IS clear is that we are, on average, too clean. 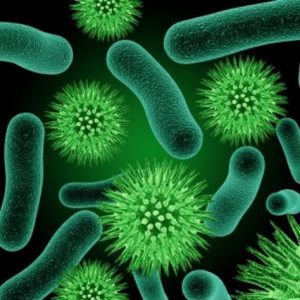 A significant portion of this is the microbiome of the gut. There is an incredible, largely invisible world, of cellular communication, symbiosis and chemistry occurring between ‘us’ and our microbiome. Strictly speaking, we could consider these organisms to be ‘outside’ of our body, based on what I described earlier. But either way make no mistake: Without our intestinal flora, we would not survive. They are part (a large part) of our immune system, they help digest food, they keep us free from illness by out-competing foreign pathogens (by producing bacteriocins, fatty acids, and clocking prevent pathogen implantation).

Our intestinal colonies have also been targeted for study because of how they make antioxidants in cocoa available for our bodies to use. A meta-analysis (a study of studies) of 20 research papers showed a meaningful drop in blood pressure in those who consumed dark chocolate or cocoa daily; this is a direct result of the fermentation and further digestion of these compounds made possible by our microbiome.

How Do These Three Pieces Interact?

Some novel research indicates that certain compounds produced by certain gut flora can make colon cancer more prevalent by blocking the activity of DNA repair proteins. And that may not be just something for ‘someone else’ to worry about; another recent finding published in Nature shows that the composition of the gut microflora can be changed very ‘rapidly and reproducibly’ in response to dietary changes. Some of the consequences are directly due to microbial gene expression. This could be for the worse, but could of course also be for the better (reducing the odds of genetic changes and cancer).

Even the inflammatory cascade of Crohn’s disease seems to be related to the gut microbiome and specific microbes in particular. The researchers in this particular study even developed a model called a “microbial dysbiosis index” to predict Crohn’s disease onset and severity based on the flora present in study participants.

Ben Locwin, Ph.D., MBA, M.S. is a contributor to the Genetic Literacy Project and is an author of a wide variety of scientific articles for books and magazines. He is also a neuroscience researcher and consultant for many industries including food and nutrition, pharmaceutical, psychological, and academic. Follow him at @BenLocwin.