Why there is no male version of ‘the pill’

The search for an effective male version of the pill has stalled. Researchers working on an injectable form of birth control for men ended their clinical trial early, but it wasn’t their decision and not because the drug was completely ineffective. Instead, the trial was canceled by an independent committee because “the risks to the study participants outweighed the potential benefits.” Those risks: mood changes, depression, pain at the injection site, and increased libido.

Some, such as Atlantic senior editor Julie Beck, see this as a double standard. Beck writes:

Hm. Hmmmmmmmm. Hm. Let’s review some of the possible side effects of currently available birth-control options for women, shall we? Here’s just a sampling.

On the other side, OB-GYN and blogger Jen Gunter defended the study’s withdrawal:

These side effect rate is pretty high with this new study of men when compared with contraception studies for women. For example and perspective, a study comparing the birth control patch with the pill found a serious adverse event rate of 2%. The pill reduces acne for 70% of women and in studies with the Mirena IUD the rate of acne is 6.8%.

The reality is that no birth control is perfect. An injection once every eight weeks may not seem feasible or desirable for men, but some women do receive their birth control in this fashion via the Depo-Provera injection which is given once every three months. Almost everything has side effect and scientists and regulators need to balance what options already exist with the safety and efficacy of any new products. Unfortunately, only two family planning options exist right now for men: condoms and vasectomies. Neither is perfect. Condoms aren’t 100 percent effective and vasectomies can be permanent. Men who want to share an equal responsibility with women to prevent unwanted pregnancies may have to wait a bit longer for ‘the pill’ they can call their own. But maybe not too long, as several options are on the horizon.

A history of birth control

Birth control is not a recent invention, and while hormonal birth control for women has been approved in the U.S. since the 1950s, humans have a long history of trying to prevent pregnancy. People have been dabbling with all different kinds of birth control since Greek and Roman’s civilizations rose to prosperity. Coitus interruptus is mentioned in the Bible, and Aristotle proposed using natural chemicals such as cedar oil, lead ointment or frankincense oil as spermicides. Many older remedies involve finding materials that physically block the sperm from reaching an egg.

Ancient condoms were made oiled silk paper, lamb intestines, tortoise shells and animal horn. Today’s condoms are very effective and likely more comfortable than their predecessors. However, condom usage is falling among men–in part due to men’s (and some women’s) preference for the feel of intercourse without a condom. This is part of the allure of a drug form of birth control for men–despite the fact, it will do nothing for rising rates of sexually transmitted diseases.

Male contraceptive on the horizon

The study on the injectable male birth control that was canceled did, overall, have very encouraging results. The researchers recruited 320 men in monogamous relationships and injected them every eight weeks with a concoction which primarily consisted of synthetic testosterone and norethisterone enanthate– a derivative of progesterone and estrogen, two female hormones. The results show that the drug reduced the average pregnancy risk to 1.57 in 100. That is significantly lower than the 18 out of 100 pregnancy risk reported with condom use. And despite the reported ‘side effects,’ 75 percent of the men said they were satisfied with the injection and would continue to use it if it were commercially available. So while the trial was canceled, the drug may not be dead.

There are also several other male birth control options in various stages of development. One of the more promising ones is a non-hormone based shot, called Vasalgel. It’s a molecule which is inserted via a shot into the scrotum to block sperm from traveling through a man’s sperm-carrying tubes, otherwise known as the vas deferens. It evolved from research on a similar molecule called RISUG which has been studied extensively in India in both animal and human trials. It hasn’t made it to the U.S., in part because the RISUG molecule doesn’t have a very stable chemical composition and because of regulatory hurdles. 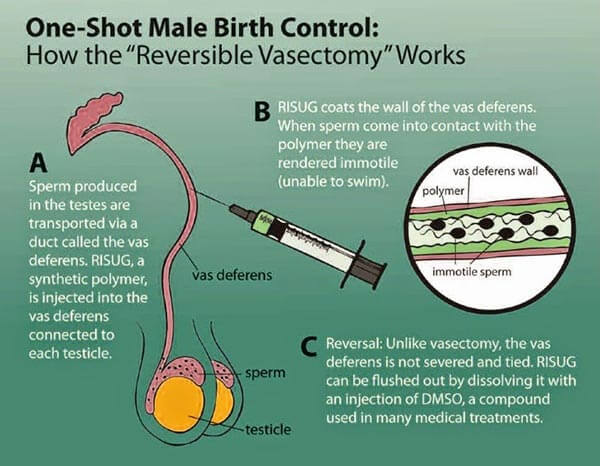 The animal trials for Vasalgel have been very promising in the US, but it’s not clear if it will make it to human clinical trials yet. If approved by the U.S. Food and Drug Administration, it could make it to store shelves by 2020, said Aaron Hamlin, who is the executive director of the Male Contraception Initiative a nonprofit organization dedicated to informing people about male birth control options.

But the bigger question is why hasn’t there been a male birth control before now? The National Institutes of Health sums up the issue succinctly:

The lack of progress in developing affordable, safe, effective, and reversible male contraceptives is due not to the biological complexity involved in suppressing spermatogenesis [the production of sperm], but rather to social and economic/commercial constraints.

Essentially, the NIH is saying that male contraception hasn’t happened yet because previous decades weren’t interested in it. Because there was no interest, no one was going to fund it. Consequently, research for male birth control is decades behind the same research for women.

People have been happy to leave the burden of family planning to women, but in 2016 we are starting to see more and more men who want to see equality for women not just in labor but in the home. Men want to take some of the burden and they also want to have the same option to control their fertility that women have had for the last few decades.

Elizabeth Newbern is a contributing writer for the GLP. She has also written for GenomeWeb, Live Science, Audubon Magazine, and Scholastic. She received her MA in Journalism from New York University and a BA in Geology from Bryn Mawr College. You can follow her on twitter @liznewbern.