Psychotherapy revival: Can “talk” therapy change our brains and genes?

Is Sigmund Freud in history’s rear view mirror? Is psychotherapy a dying art?

Visiting a psychiatrist today could result in a prescription for a drug or possibly a brain scan if the problem is seen is threatening. But there was a time when more likely than not the prescription would have been psychotherapy — the act of sitting down and talking with a therapist about problems.

Has the practice of couch-based “talk therapy” become obsolete in the wake of advancing knowledge about the brain and mental disorders? Or has it just fallen out of style?

While many prominent psychiatrists have continued to tout the value of psychotherapy, others have expressed doubts about the technique. It does have recognized value; it’s estimated that for mood disorders like depression, psychotherapy works about 60 percent of the time. So we ask the question: Is drug therapy the appropriate default for addressing psychiatric problems.

The answer of course is “it depends.” Views are changing, however, as we come to better understand what goes on during therapy at the biological level. Scientists recently found that in some cases, the work of a “paid friend” may have an impact on a patient’s genes, biology and brain function, and they also identified biological changes that can predict how well talk therapy can work.

In an editorial in Psychiatric Times, Allen Frances, emeritus chairman of psychiatry at Duke and former chair of the Diagnostic and Statistical Manual (DSM-IV) task force, wrote that “Psychotherapy works at least as well as drugs for most mild to moderate problems and, all things being equal, should be used first.” 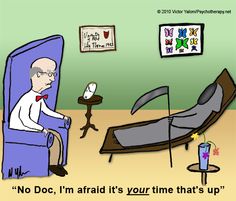 And the American Psychological Association, while acknowledging that drug therapy has been used more and more often over the past several decades, still maintains that “talk therapy” can sometimes be more useful than more biologically based drug therapy.

What does this spate of findings suggest about the benefits and limits of psychotherapy?

Where it came from, what it does

Psychotherapy, as practiced in today’s psychiatrist’s or psychologist’s office, is often a way for someone who has intractable troubles that may have non-biological dimensions (losing weight, quitting smoking, depression, anger, anxiety, etc.) to develop a relationship with a counselor. Techniques are used so that the two can find successful ways for the patient to cope. Three key factors are part of any psychotherapy approach: attachment (emotional engagement between the patient and practitioner), empathy (understanding and articulating the patient’s perspectives), and ultimately, fear extinction (the ability to face and overcome psychological obstacles).

Psychotherapy first arose in practice (as far as we know) in 1880, when a doctor named Joseph Breuer used it on a female patient who called it a “talking cure” and “chimney sweeping.” Breuer abandoned the use of the technique, but one of his students, Sigmund Freud, expanded on the practice, essentially founding the modern psychiatric movement. By the early 20th century, nearly every American practitioner was using some form of talk therapy.

However, whether Freud succeeded at making psychotherapy a scientific exercise is still somewhat up for question. Some psychiatrists and biologists have pointed to Freud’s theories as having no basis in the biology of the brain, and looked instead at more biological answers to mental disorders. However, since the biological basis of behavior hasn’t exactly been revolutionizing our understanding of mental disorders, “talk therapy” remains.

Freud, for his part, never gave up believing the biological basis of his theory:

The deficiencies in our description would probably vanish if we were already in a position to replace psychological terms by physiological or chemical ones. Biology is truly a land of unlimited possibilities. We may expect it to give us the most surprising information and we cannot guess what answers it will return in a few dozen years to the questions we have put to.

It’s taken much more than a few dozen years to get remotely close to the point Freud had hoped for, but we are getting closer:

These studies have prompted biologists and psychologists to look at whether genetic variation and environmental influences can provide biomarkers of a sort, predicting whether a certain psychotherapy technique could be effective. Further, psychotherapy could be enhanced by combining “talk therapy” techniques with drugs, genetic testing, and other neurobiological tools to treat mood, anxiety, or other psychological disorders. There’s even a new name for this new field: “therapygenetics.”

Maybe Freud’s dream wasn’t just a dream, after all.